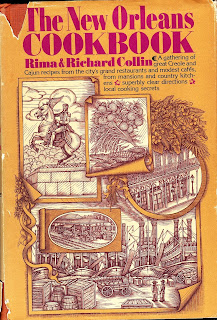 Louise at the blog Months of Edible Celebrations is celebrating some sporting event today. Evidently one of the teams is from New Orleans, and she wondered if I would write about some New Orleans cookbooks I had mentioned. I don't mind, as long as I don't have to say anything about sports. So here goes.

The New Orleans Cookbook by Rima and Richard Collin was first published in 1975, and it's still in print. It begins with lists. First, ingredients -- alphabetical from Absinthe through Tabasco, Tomatoes, and Yam. Second, techniques from Boiling to Smothering. The recipe organization is just as indicative of the unique NOLA cuisine: Chapter 1, Gumbos and Soups; Chapter 2, Red Beans and Rice! and Jambalya; then chapters titled Crabs, Crawfish, Oysters, Shrimp, and so on until Desserts and Drinks.

The illustrations of historic food ads, restaurants, and menus are fascinating, and the descriptions are lushly appealing:

"The steaming aroma of fresh caught crabs, shrimp, and oysters; the smell of butter and flour browning slowly in a large iron pot over an open fire; the sizzle of freshly chopped onions, green peppers, and 'shallots' added at just the moment the flour and butter turn a rich brown; the scent of chicken or duck slowly cooking into the mixture of onions, vegetables, and roux; the taste of good fresh okra or exotic sassafras -- this adds up to a good Louisiana gumbo." (p. 15)

My notes tell me I've made several recipes over the years; for example, in 1981, I tried Fricasseed Wild Duck with Brandy and Wine (p. 153), but noted that I used an ordinary duck -- never having even seen any game that I could cook. I don't really recall making this very interesting recipe. Although the recipes in this book are often challenging, I have always been glad to have this cookbook! 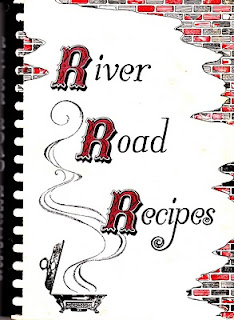 For simpler home cooking, people from Louisiana recommend River Road Recipes, which is published by the Junior League of Baton Rouge, LA. It's another book with staying power -- the 50th anniversary edition was published last September; several sequels are also in print. The number of copies was already in the hundreds of thousands when I bought one of 20,000 copies in the forty-fourth printing (November 1976).

My copy of River Road Recipes is yellowed and marked up. First, there's a little red check-mark beside many recipes, indicating the favorites of a woman we met in Baton Rouge (the mother of my brother's college friend). She recommended, for example, the Sauce Meuniere or Remoulade Sauce (p. 119) on trout. Over the years I've tried a large number of cakes and cookies from this book, and found most of them quite nice. Like many charity collections, some of the contributors were much more skilled at cooking, baking, and recipe writing than others.

Both of these books reflect the old-style Creole, Cajun, and New Orleans traditional cooking styles. Just reading through them is a fascinating reprise of one of our rapid trips into the city, when I seem to recall we ate three large meals between noon and evening, because our host wanted us to sample everything we possibly could. The dish that most impressed me was the bread pudding with rum sauce at a little home-style restaurant a bit away from the tourist area, but I've never had another bread pudding that delicious again. 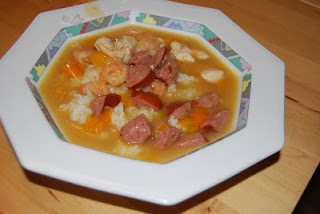 The latest New Orleans cookbook I know about is a spin-off of Disney's latest princess movie.

Tiana's Cookbook: Recipes for Kids, to our surprise, includes quite a few serious recipes that kids may like to eat, but it takes a grownup to really cook them. Tiana's two most special dishes: beignets, which are deep-fried, or gumbo, which is rather complex, both appear in the book.

There are also some very Disney things such as cupcakes frosted to look like frogs and a cake made in the shape of an alligator, which aren't precisely New Orleans cooking, more like Disney movie cooking. The photo at left shows the gumbo as made by Evelyn, who has been cooking her way through this unexpectedly useful book. 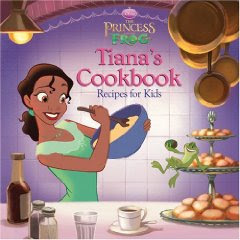 Several weeks ago, I wrote about the movie, see: What do princesses eat?

Our posts today were such fun, Mae. Thanks for adding those "tasty" garnishes about Hoosier cooking. I must check them out. We should do this more often. Have a wonderful "non-sport" day. I'm off to that auction again!!!