Little Man, What Now? is a novel by Hans Fallada (born Rudolf Ditzen -- his pen name comes from stories by the brothers Grimm). Written in around 1930, it depicts two years in the life of a pathetic young couple in depression-era Germany. The hapless "little man" of the couple, called Hans Pinneberg, and his wife is called Bunny (in the translation by Eric Sutton). I have known about this novel for a long time, always meaning to read it, and finally, I've done so. (The image is from the now-obscure Hollywood movie based on the book -- I've never seen it.) 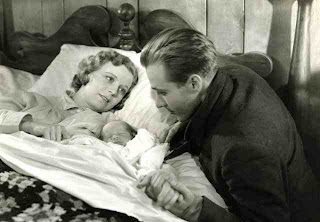 When the novel begins, Pinneberg and Bunny, an unmarried couple in their early 20s, are at the gynecologist's office learning that she is pregnant. His job is completely inadequate to support a wife, let alone a baby, but they decide to marry and do what they can. As the German economy declines, he is less and less able to earn a living, and by the end he, Bunny, and the baby are living on a combination of money from the dole and from her earnings from darning and mending. A hut out in the fields beyond the city of Berlin has become their home.

Both of them -- especially Pinneberg -- are naive and simple, and rarely comprehend important signals that would help them to cope with life. Other characters in the novel turn to illegal or quasi-legal money-making methods, or simply steal wood to heat their houses. Some consider various ideologies: nudists, anti-semites, Nazis, and Communists all have their adherents among the folks of Pinneberg and Bunny's acquaintance, but ideology has no place in their outlook. Bunny says she believes in the solidarity of all workers -- they don't however act in solidarity when Pinneberg takes her advice. Satire and irony often soften the harsh observations of this very simply-written book. Eventually, it's made clear that the answer to their desperation is honest work to enable self-respect and a decent human life, without ideology at all. Even gifts of money are useless, in their view; money can only prolong their illusions.

Bunny's skills as a cook are non-existent when she first marries Pinneberg: she tries to make soup from half a pound of peas, a bit of meat, and 5 quarts of water. "It's the water that's the trouble," he explains to her. "The water is too thin." So she leaves the pot on the boil: of course it burns up. (p.76) Later, she learns how to cope, but she has cravings. She buys half a pound of smoked salmon for their dinner, but as she leaves the shop, she ducks into a doorway and eats just one slice from her share. By the time she arrives at home, she's finished it all, and returns weeping with guilt. (p. 104)

Later, though, she makes a careful budget to enable them to live on his decreasing salary. Line items include butter and margarine, eggs, vegetables, meat, sausage and cheese, bread, fish... but of course he loses one job after another, and by the end, she's happy to take mending jobs because the rich people she works for feed her while she's working. And she tells him where he can buy a few cheap bananas and a bit of butter for the baby.

Fallada, I learned, led a difficult life. He stayed in Germany throughout the Nazi years, but was addicted to drugs and committed to a mental institution for some of that time. He wrote several other books that were less well-known in America. It's hard to read this book without thinking he knew all about the future, the war, the disasters, the unravelling of the lives of so many like this little hapless, foolish, but so-human couple.
Posted by Mae Travels at 9:38 PM