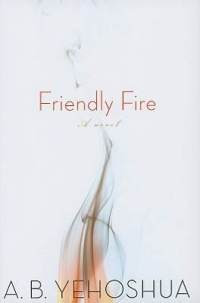 Miriam's Brownie troop was preparing for a "thinking day" about many countries. Their country is Tanzania. Imagine my surprise when I chose to read A.B. Yehoshua's book Friendly Fire, expecting a book about Israel -- half the action takes place in Tanzania. A few weeks ago, I picked up Miriam when her troop had been getting ready for their presentation, including trying some Tanzanian food. I only smelled it, but as I read about several dinners in this far-away place, the smells came back to me.

Friendly Fire is a many-layered book with several thematic strains. The central figures are a husband and wife, normally inseparable. For the six days of the book's action, they separate as she makes a trip to Tanzania to see her late sister's husband. Meanwhile, her husband is left in charge of his business: designing elevators, and their family: two children, two grandchildren, and an aging and ill father. The problems with elevators making eerie noises plays off against the animist religion and mysterious wild setting in which his wife is visting. Very short vignettes alternately advance the way that the two spouses lives advance during their separation. The writing is masterful.

"Friendly fire" is the term that the husband had unfortunately used years before, during the traumatic moment when he had to inform his wife's sister and brother-in-law of the death in military action of their son. The term and the death haunt all of the characters in the book. For all of them, the term is an obsessive symbol of a variety of issues in their lives. Fire appears repeatedly -- Hanukkah candles, water boilers, African torches, merging with the painful memory of friendly fire.

In Tanzania at the time of the visit, the brother-in-law is working as a financial manager of an all-African dig to learn the origins of the human species. He's also escaping from Israel and his Israeli identity -- two major themes of the book. His summary of his view at the very end of his many efforts to make his sister-in-law understand his determination not to return:

"Here [in Africa] there are no ancient graves and no floor tiles from a destroyed synagogue; no museum with a fragment of a burnt Torah; no testimonies about pogroms and the holocaust. There's no exile here, no Diaspora. There was no Golden Age here, no community that contributed to global culture. They don't fuss about assimilation or extinction, self-hatred or pride, uniqueness or chosenness; no old grandmas pop up suddenly aware of their identity. There's no orthodoxy here or secularism or self-indulgent religiousity, and most of all no nostalgia for anything at all. There's no struggle between tradition and revolution. No rebellion against the forefathers and no new interpretations... The people around me are free and clear of that whole exhausting and confusing tangle." (p. 337-338)

Food is another, minor theme, mainly reinforcing the strangeness in which the woman visitor, Daniela, finds herself. Israeli-style food in a few passages contrasts with the food prepared in the kitchens of the archaeology team. A pita-and-eggplant sandwich greeted her at the airport when she landed -- her brother-in-law's welcome. And before a farewell banquet at the end of the book, cooks offered a taste of an unidentified dish "Here madam, they say, now that you are getting used to the smell and taste of Africa, you are leaving." (p. 310)

In the simultaneous events taking place with her family in Israel, food and hospitality are repeatedly linked -- maybe somewhat mechanically. Coolers full of food are described at the scene of a visit to an army base where many recruits' families are visiting: a conventional description, in my opinion. Despite the sketchy nature though, food descriptions combine with other themes and details to create a strong feeling of contrasting atmosphere in the two locales.

Several friends recommended that I read this book, so I have not read any reviews and don't know what any critics think of it. I think it's fantastic.
Posted by Mae Travels at 12:01 PM