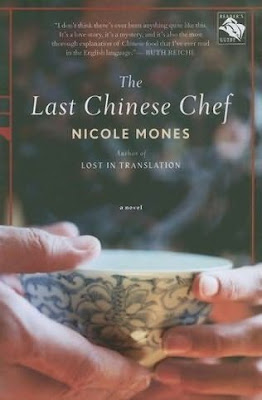 On the airplane today, I read a fabulous food book, The Last Chinese Chef by Nicole Mones. This novel has well-developed and likeable characters, an exotic setting (modern China and flashbacks to the whole of 20th century China), and two simultaneous plot lines. All good.

Besides being the title of the novel itself, "The Last Chinese Chef" refers to a fictional treatise on Chinese cooking written in 1925; Mones often quotes long passages from this work -- and citations from it also serve as chapter headings. The fictitious author was an authority on the dining habits of the last Imperial court, among other things, so the quotes are really fascinating. The contents of the work seem to be based on honest scholarship, despite being a fiction.

The characters in the book include a Chinese chef, grandson of the author of the fictitious treatise, and a food columnist for Table magazine -- also fictitious, of course, but Mones's bio mentions her having written for Gourmet. Wink, wink. One plot includes the chef's practicing for a cooking contest, describing his efforts to learn to be a classical chef in the grandfather's tradition.

My cousins Bill and Barb liked this book and thought I would too -- they were so right!
Posted by Mae Travels at 7:15 PM