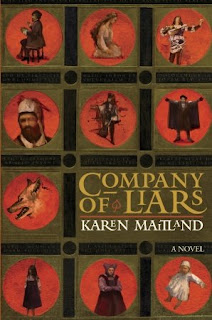 Avoiding starvation is a big challenge when you are wandering around, sometimes avoiding the authorities. Snaring or killing small birds and animals with a sling, gathering a few greens, buying or trading a few beans or grains, or stealing a sheep (a capital crime), and finding fuel to cook the meager gleanings are the main culinary adventures in Karen Maitland's novel Company of Liars.

The work combines medieval scholarship with a suspense tale, though in the afterword, the author admits to various anachronisms (which I noted when it came to the parts about Jewish history). The book is set in England in 1348. A group of wanderers, who for many reasons have no homes, are desperately trying to evade exposure to the pestilence -- the black plague -- that's destroying village after village. They fall in with one another out of convenience and desperation.

Each of the wanderers has his or her own tale to tell -- or to hide. As they become more and more frightened, they basically guess or weasel out one another's stories. The book has many good qualities, but the author's interest in describing a great deal of medieval history sometimes gets in the way of building suspense.

The author does work in a few real medieval dishes in the course of all the starvation, shortages, and hoarding. I thought I would search for some background -- and discovered an interview with Maitland in her hometown newspaper in Lincoln, England (a medieval city that I once visited on a quest to learn about a particular historic character, Aaron of Lincoln). So here's a recipe for one thing the wanderers eat. It begins with a quotation from page 75 of the novel:

"The night after we arrived, I made my way to the Angel, a tavern favoured by the more experienced travellers, where you could still get fried brawn and sharp sauce for an honest price.

"In the dim mustard fug of the smoking rushlights, it was hard to make out any man's features and those who frequented that particular tavern preferred it that way."

Fried Brawn, known as Braun Feyez, was made from trimmings of the pig's head, trotters, tail and tongue boiled for hours with onions, spices and herbs. Once the liquid was reduced, the thick mass was left in a cold dish until the meats were set in jelly.

The block of brawn was turned out, sliced and fried in lard or butter.

It was served with a sour vinegar sauce, Gruant Tartez, to offset the rich greasy meat.

From: Cook up a medieval feast, published September 27, 2008