History and how to disrespect it 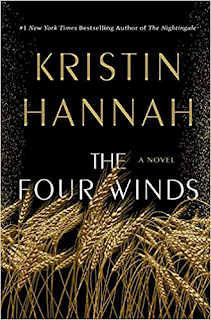 The Four Winds by Kristin Hannah describes a noble cause: fair pay and working conditions for farm workers. The story embodies this noble cause in the lives of a few characters who learn from experience why humane treatment of workers is a cause worth living for. Specifically, this historical novel describes the hardships of the dust bowl era in the Texas Panhandle and the effort of one small family to find a better life in the cotton fields of California — where they instead discover how badly the migrants like themselves are treated, and how the cause of organizing for workers’ rights is crucial.
If a noble cause was all it took to make a great book, this would be a great book. Unfortunately, a few other things are lacking here. First, it’s a historical novel full of small details that the author didn’t bother to check. Second, the characters are presented as romantic and tragic and heroic but the actual portrayal is not very convincing, original, or well-written: there’s a lot of pathos, not much depth; further, there’s an overwhelming amount of repetition in the descriptions of features like the symptoms of starvation shown by the migrants. And third, the narrative is far too dependent on cliches and over-used language, especially in the dialog and the portrayal of the Italian family of the main character’s husband. I marked some specific examples, but they are really on almost every page, so I’m not going to quote them here.
However, I want to give a few examples of small but to me indicative points to illustrate the flawed historicity of the novel. These are clues about the author’s careless attitude, and maybe not important in themselves, except as indications of generally sloppy research.
The author vaguely addresses her inconsistencies in the end notes: “Primarily where I diverged from the historical record was in the timeline of events. There are instances in which I chose to manipulate dates to better fit my fictional narrative.” (p. 354)
This doesn’t really explain her lack of attention to detail, which I feel is important in a historical novel.

Frankly, it you want to read or hear about the dust bowl, the Okies, the migrant workers in California during the Depression, and the related political issues, I would recommend that you read Steinbeck’s Grapes of Wrath or watch the Ken Burns history series titled “The Dust Bowl.” You could even read some actual historical research, though most likely, it wouldn’t have seamy (though trite) sex scenes like the novel.

Looking Up Some Facts

You can see that I did have fun looking up some of the background about the Dust Bowl and the details of the lives of the characters in The Four Winds. I really wish the book had been better!

I found a few sources that indicated that the book sometimes was a pretty good reflection of history. Dallhart, Texas, a town in Dallam County, was the birthplace of Elsa, the main character. For one thing, Elsa loves the library (though its founding date was one of the facts that the author shifted to make a better story).  I found some interesting material in the website of the Texas State Historical Association:

The Dallam County Public Library, the first county library in Texas, opened for circulation in January 1921. …

During the drought years of the 1930s Dalhart was notorious for its "black dusters" (see DUST BOWL). R. S. (Uncle Dick) Coon, a wealthy businessman who owned the DeSoto Hotel, became legendary for his generosity to depression-stricken farmers and cowboys. In August 1934 Dalhart became the site of one of the first three erosion-control demonstration projects in Texas, sponsored by the federal land bank, and the first to be devoted specifically to wind erosion.

Some of the reviews of this best-seller seemed to have a reaction pretty much like mine. For example, the Washington Post review was titled "‘The Four Winds’ is Kristin Hannah’s next inevitable bestseller. Don’t forget the tissues." Its conclusion:

In fact, despite the strong echoes to “The Grapes of Wrath,” Hannah may be working closer to 19th-century melodrama. The heroines of “The Four Winds” are purely heroic; its villains wholly evil. Hannah never risks ambiguity; her pages are 100 percent irony-free. And she moves with a relentless pace. Her prose, so ordinary line by line, nevertheless accumulates into scenes that rush from one emergency to the next — starving! beating! flooding! — pausing only for respites of sentimentality. (There’s a little boy in these pages so sweet he could be ground up to flavor 8 million cupcakes.)

Despite Hannah’s extraordinary commercial success, the snob in me wonders what this indefatigable author could produce if she endured a little tougher editorial criticism and gave herself a little more time. (She’s published 24 novels in 30 years.) But that would mean fiddling with the well-oiled machine that reliably produces such marketable passion. I confess, I spent too long rolling my eyes at the flat style, the shiny characters and the clunky polemics of “The Four Winds” before finally giving in and snuffling, “I’m not crying — you’re crying!”

While she never overcomes her low self-esteem about her looks, Elsa displays an iron core of character and courage as she faces dust storms, floods, hunger riots, homelessness, poverty, the misery of migrant labor, bigotry, union busting, violent goons, and more. The pedantic aims of the novel are hard to ignore as Hannah embodies her history lesson in what feels like a series of sepia-toned postcards depicting melodramatic scenes and clichéd emotions. For devoted Hannah fans in search of a good cry.

As I’ve said, I wish this had been a better-written and better-researched novel, but at least it caused me to look up some interesting history articles!

Thank you for specifying and researching the things that bothered you about this book. Our book club is going to read it next month. I will share a link to your review with them.

@Deb Nance — Thanks for the comment and for sharing your review. I agree with everything you said.Especially:
“ I found a hundred reasons to criticize the book, including some things as small as the ability of the family to eat Italian dishes during the Great Depression and the use of the words "kids" and "mom." The people in the story just didn't sound as if they were true to the time, and that was one thing that bothered me a lot.”

I didn't do a lot of fact checking on this book, but I enjoyed it. Not knowing a lot of the history of the time, it was a good introduction. I especially didn't know how badly the migrants were treated when they got to California. Yes, I think this book was a bit "staged", but I don't think the author wrote this as a history, but more as just entertaining fiction. It is definitely not great literature, which does portray life as it really was. And this book is fiction with a touch of history thrown in. I did enjoy reading your review though. I think people who really want to know about the time and the actual history of the dust bowl wouldn't be reading this book to start with.

Like Erika, I didn't fact check this book so enjoyed reading it and learning more about life during the Dust Bowl and migration to CA.

I wonder if they had found a coin in Sicily would it have been called a penny? Your review is a clear reason to steer away from this book.

I love your "review". As I get older (79) I can remember a number of things that people write books or movies about. Small anachronisms don't bother me as much as applying today's rules or views on yesterday's events. I might add that some of the things the people faced in that time are still with us today. And that makes me sad. Again, an excellent post.

oh dear oh dear I am not a fan of historical novels at all! Probably for a lot of the reasons you give here.

I remember my grandparents telling me about the dust bowl. They were both quite young and had very different experiences, but nothing like what you describe. Thanks for your review, dear.