"The sugar began to darken and smoke as Pearl stirred. When it was almost black, she took a small pot of boiling water and poured its contents onto the sugar, turning her face away as the mixture sizzled and splattered. She would add the blacking to the batter to darken it, but only after she had whipped the butter, added the eggs, flour, spices, and, finally, the mixture of fruits that had been soaking for weeks in dark rum and port. This cake would be a work of art." (Black Cake, p. 117) 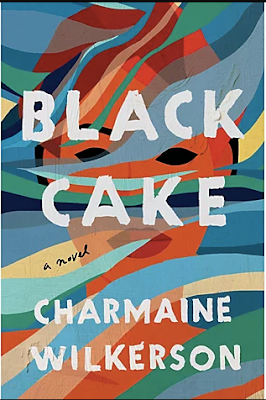 The novel Black Cake has the most complicated plot that I could imagine. Somehow it also tells a beautifully simple and direct story. Charmaine Wilkerson has written a most wonderful book.
The novel begins as two characters, a brother and sister named Byron and Benny, get together for the first time in seven years after the death of their mother. The mother’s last wishes were to reveal the secrets of her life, and that's the entire plot: to tell her secrets. If I said more about their discoveries, it would spoil this remarkable tale of a woman who created herself, from her beginnings on an unnamed Caribbean island through her immigration to England, and finally, her death in California 50 years later.
Central to the mother's identity: the food of her native land, above all making Black Cake, a specialty of Jamaica, Belize, Barbados, Guyana, Trinidad, and several other islands. Without giving away the plot, here are the highlights of what is said about Black Cake.
Black Cake is a traditional Caribbean version of fruit cake, with spices and booze-soaked fruit. The batter is colored black by the use of dangerously hot burning sugar along with the dark-colored fruits. Lovers of Black Cake find it delicious. In the novel, it's also symbolic. The mother kept a jar of fruit soaking in her kitchen at all times, and used it frequently for making Black Cake. She had remembered the same practice in her childhood home. The Black Cake was served at wedding anniversary celebrations, and a new cake was always baked when the old one was eaten: Black Cake keeps almost indefinitely thanks to being soaked in the large quantities of rum or other alcoholic beverage.
Byron’s thoughts on Black Cake:

“His mother used to say she would make a black cake for Byron and Benny when each of them got married, but neither of them had. Ma’s cake was a work of art, Byron had to admit. That moist, loamy mouthful, the tang of spirits behind the nose. But Byron had never shared his parents’ emotional attachment to the recipe. Tradition, his ma used to say. But whose tradition, exactly? Black cake was essentially a plum pudding handed down to the Caribbeans by colonizers from a cold country. Why claim the recipes of the exploiters as your own?

“Tradition? How about coconut gizzada? How about mango ice cream? How about jerk pork, rice and peas, Scotch bonnet peppers, coconut milk, yellow plantains, and all those flavors that Byron had come to enjoy, thanks to his mother’s cooking? Now, that was what he called island food. But no, these had never been enough for his ma. More than any other recipe, it was the black cake that brought that creamy tone to his mother’s voice. That shine to her eye.” (p. 95)

Another character, Marble, is a TV food guru with a belief that many traditional foods have multi-cultural origins. During one of her broadcasts, she says this:

“What about the classic Christmastime fruit cake? In Britain, it’s often made with cane sugar from the tropics. In the Caribbean, it’s made with raisins and currants imported from colder countries. My grandmother, who was English but spent years living in Trinidad with her missionary parents, makes a divine rum cake, Caribbean style. She calls it black cake. But is it really Caribbean? Cane sugar didn’t even originate in that part of the world. It arrived from Africa, which in turn got it from Asia. So, you tell me, whose cake is it?” (Black Cake, p. 250)

Eventually, when going through their late mother’s kitchen, Benny and Byron find the jar of booze-soaked fruit that she kept behind the canned goods. Then Benny finds her mother’s recipe:

“There it is, where it has always been, a piece of folded, lined notepaper where her mother had scribbled down the recipe for her black cake. Benny unfolds the paper and runs her finger down the list of ingredients. Rum, sugar, vanilla. And the occasional verb. Cream, rub, mix. It is only now that Benny realizes that the recipe has no numbers, no quantities at all. Wait, was it always this way? It’s the same one from her childhood, she’s sure of it. Benny sees, now, that her mother’s recipe was never so much a list of firm quantities and instructions as a series of hints for how to proceed. What Benny learned from her mother had been handed down through demonstration, conversation, and proximity. What Benny learned from her mother was to rely on her own instincts and go on from there.” (p. 296)

There’s much more than cake in this fascinating novel! I definitely recommend it — and thank Evelyn, as it was another of her suggestions. And if you should want to try baking this exotic cake, there are many traditional recipes on the web, including one from the Washington Post here: 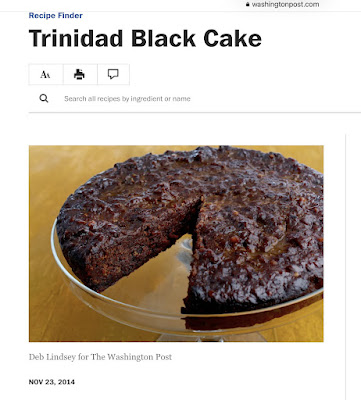 Oh, this looks interesting! Thanks for featuring Black Cake. Enjoyed all the excerpts. :)

I've heard many good things about it, but yours is the first complete review I've read. Thanks!

I also loved the book and one day I plan on banking a black cake.

Glad for once I am not tempted to buy this book as I´m not into sweets ;-)
Sounds interesting, though!

Funny, I immediately thought of my Irish mother's Christmas pudding! I didn't love it growing up but would love it now.

We used to make black cakes for Christmas, in Jamaica, and I stayed up at night to check on them, as they were steamed, not baked.

This sounds so interesting!

I have some fruit cake recipes coming soon but they definitely won't be black!

Thanks for sharing this with Weekend Cooking.

I've been hearing good thinmgs about this book, the cake does remind me of a Christmas pudding.

Interesting to hear about Black Cake ... and how it's made. Makes me curious to try it. both the dish and the novel. Sounds like you liked the latter.