"Niki, the name we finally gave my younger daughter, is not an abbreviation; it was a compromise I reached with her father. For paradoxically it was he who wanted to give her a Japanese name, and I -- perhaps out of some selfish desire not to be reminded of the past insisted on an English one. He finally agreed to Niki, thinking it had some vague echo of the East about it." (First paragraph of A Pale View of Hills)

So begins A Pale View of Hills, the first novel by Kazuo Ishiguro. This sentence embodies the tone and themes of the entire novel: the narrator's paradoxical view of her life with her late husband (an Englishman who is rarely mentioned in the remainder of the book), her complex relationship with Niki, her younger daughter, and her difficult emotions about her past, that is, her early life in Japan. By the end of the first page, we also learn that her older daughter, Keiko, had recently died, and that Niki did not attend her funeral.

Etsuko, the narrator, quickly reveals the essentials of her life. She was born in Nagasaki before World War II. In the war, she lost her family. Later she lived with her Japanese husband in a modern apartment building, not, as would have been traditional, with her husband's father who had a house elsewhere. All around her are survivors, as well as memories of a devastated city that had been partially rebuilt. Evidently, she moved to England with a new husband, raised her daughters, and suffered his death. As she narrates the story, she is living in a large house in the English countryside, where Niki is visiting her from London. During the few days of Niki's visit, Etsuko has a series of memories of life in Japan just before Keiko's birth.

As I reread this book for the first time in many yers, I found it, like Ishiguro’s others, an example of hi's ability to turn a simple story into a complex question about reality. The life Etsuko recalls in recovering Nagasaki includes her household duties, such as serving tea to her husband, her father-in-law, and her husband's guests, as well as preparing meals for her husband, who is very demanding. They seem financially secure -- he is a rising manager in a technology firm, but many of the other people in her remembered life are on a very insecure footing. One feature of Etsuko's descriptions especially interested me: she never mentions eating food, only preparing it. There's an especially interesting passage where she is making an omelet to add to some leftovers in a lunch box for her father-in-law. He watches her make the omelet, and requests that she teach him to cook so that he can avoid buying all his meals at a lunch counter.

Food as Etsuko mentions it, is one of the indications of alienation in the novel, both in post-war Nagasaki and in much later life in England. During Etsuko’s life with her first husband, she has two friends, one living in a run-down hut without a job, the other who owns a noodle shop. The impoverished friend, by her influence, gets a job in the noodle ship, where she works at all the jobs, including the hard work of preparing shrimp — an unpleasant task, especially as the friend feels too good to work in the noodle shop at all. The owner of the shop herself reflects the disrupted social order of Nagasaki -- her family had had high status before the war, but her husband and four of her five children had died and she had to go into business, a real come-down. She is upbeat, but Etsuko’s friend is highly aware of the low status of this noodle shop; her father-in-law also has this in mind as he eats and constantly says the noodles are “delicious,” on his one visit there later in the book. The reader is not given any indication of what exactly is in the noodle bowls of the shop.

In contrast, in the later Ishiguro novel Never Let Me Go, there's not a single mention of actual food or the act of eating it — an even more alienating indication for the unfortunate characters in the novel (which I wrote about here). I find this a significant absence -- for example the characters use the line for the dining room as an important place to talk confidentially to one another, but the descriptions never have them go in and see or eat food. In one scene a character is described as acting as if they were about to serve tea and scones, but it never happens. This increases the impression of alienation of the pathetic creatures whose life is meant only to turn them into organ donors. I often find that food and meals are very significant in novels, so the absence of food either as sustenance,  as a sensual experience,  or just having it be a chore to prepare it, is a very interesting choice in Ishiguro's two books. Obviously there’s much more to both of them than I have indicated here. 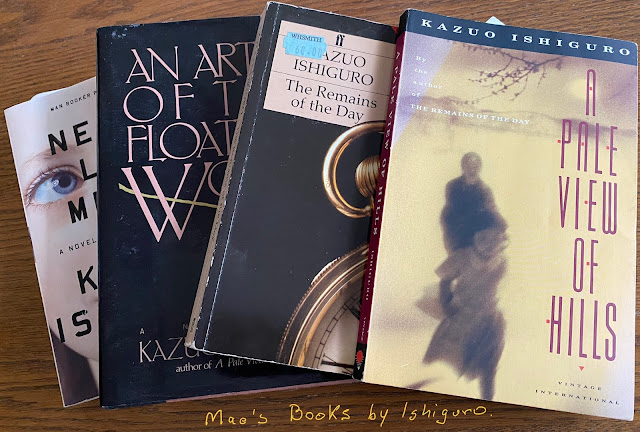 A Pale View of Hills was published in 1982. Ishiguro has now published 8 more novels, the most recent being Klara and the Sun, which was released this week. In 2017, he won the Nobel Prize, and Klara is his first publication since then. My copy from amazon is promised for delivery later today, and I'm looking forward to reading it, and to watching Ishiguro’s ways of portraying alienation in the new book, a key theme which has been mentioned in various reviews.

I thought of you when I got the press release for Klara and the sun. The noodle shops you mention were the inspiration for the creation of two minute noodles.

I'm on a long library list for Klara and the Sun, and looking forward to it. Love his writing.

I have only read The remains of the day, but I would dearly love to read more novels by this author. I never thought about this use of food in narrating a story, thanks for sharing :)

I'm eagerly looking forward to hearing Kazuo Ishiguro speak on Sunday at 5 through our Houston Inprint program. It will be virtual, of course, and the price includes a copy of the book.

I've never thought about the meaning of food in novels. Something to think about.

Adding to my ever growing pile of "to-reads"!

I so enjoy reading your reviews. I enjoyed your take on the noodle shop, which was a demotion of what I perceive as class distinction. It was fun to read your thoughts on this book. You describe food items so well, dear Mae.

I want to read Kazuo Ishiguro's book one day...