"The Committed" by Viet Thanh Nguyen

"Ah, baguette! Symbol of how we Vietnamese have made French culture our own! For we were good bakers of the baguette, and the banh mi we created with baguettes were far tastier and more imaginative than the sandwiches the French fashioned from them. That dialectical baguette, along with a cucumber salad in a rice wine vinaigrette, a pot of chicken curry with potatoes and carrots, a bottle of red wine, and, eventually, a caramel flan in a dark brown puddle of caramelized sugar, was the repast prepared by my aunt. How I had longed for these dishes or anything like them! Fantasies of food had beckoned to me during the endless months spent in the reeducation camp..." -- The Committed (p. 17). 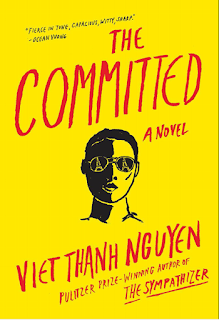 Before reading the newly published book, The Committed, by Viet Thanh Nguyen, I reread his first, and quite famous prize-winning book, The Sympathizer (previously blogged here). The new book is the sequel, continuing the "confessions" of the narrator, but there are major differences in the nature of the two novels.
The Sympathizer begins with the fall of Saigon and the end of the Vietnam War in 1975. It contains flashbacks to the early life of the narrator, who was born in Vietnam but acculturated to the USA by attending college in southern California. In the first half of The Sympathizer, the narrator relates his feelings of alienation in America as a Vietnamese with understanding of Americans but without their acceptance. The discrepancies are emphasized by a highly ironic and satiric way of describing this relationship, and the roles of many other Vietnamese refugees who escaped after the war.
One plot line in the novel involves the narrator's work for a film-maker creating a movie about the Vietnam war. Despite a variety of efforts, he feels that he completely failed in the goal of helping to create a portrayal of Vietnamese soldiers and civilians as real human beings as he knows them. After filming is complete, he returns to post-war Vietnam, where he is arrested. His unspeakable experiences in a re-education camp are the focus of the second half of the novel. It's a painful plot, involving torture and worse. 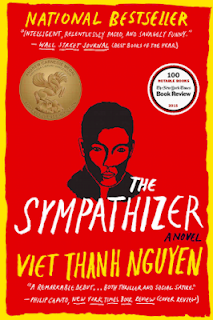 Soon after the narrator's release from the prison camp where The Sympathizer ends, he is "repatriated" to Paris: roughly in the early 1980s. This is the start of The Committed. He has a lot to deal with!
Although the narrator has never been to France, and his mastery of the language is shaky, he has a claim to be French, because his father was French. Specifically, his father was the colonial Catholic priest of the narrator's village. His mother, then a 13 year old orphan, had been a housemaid for the priest -- so he's half French, half Vietnamese, and always confused. Identity problems are a huge focus of both novels, especially how everyone asks him where he is really from, or sees him as a symbol of race relations, colonial aftermath, or whatever: "Get used to it, my dear. We French love nothing more than symbols," is one of the first bits of advice he receives in Paris. (The Committed, p. 34).
In The Committed, the narrator deals with his various problems in two ways: he acts in a very antisocial way by aligning himself with Vietnamese criminals and drug dealers in the Paris underworld, and he reads and ponders the huge mid-20th-century French literature of existential identity and of the evils left by the colonial system and colonial wars. As in The Sympathizer, one way the other immigrants cope is by opening Vietnamese restaurants as a front for whatever they really do.
"Those who believe in revolutions are the ones who haven’t lived through one," says the narrator (The Committed p. 120). In Paris, he finds a few French and French-Vietnamese intellectuals to discuss politics and philosophy with, using both his reading and his more direct experience. He meets many of them through a French-Vietnamese woman, whom he calls his aunt. She takes him into her home and life in Paris. In addition to the introductions, she feeds him very well as illustrated in my introductory quote, which also shows the way he views the influence of French colonialism on Vietnamese culture.
In The Committed, the narrator engages in or is the victim of a gigantic amount of graphically described violence with the gangs he becomes involved with in a complicated plot. In addition, his friends and comrades from his earlier life (as in the first volume) play a big role. I think it would be difficult to read the sequel unless you had The Sympathizer firmly in mind, as I did by rereading it first.
It also wouldn't hurt if you knew a little about the political philosophers and communist heroes of that time. In the Acknowledgements the author mentions the following: Theodor Adorno, Louis Althusser,  Simone de Beauvoir, Walter Benjamin, Aimé Césaire, Hélène Cixous, Jacques Derrida, Frantz Fanon, Antonio Gramsci, Che Guevara, Ho Chi Minh, Julia Kristeva, Emmanuel Levinas, Jean-Jacques Rousseau, Jean-Paul Sartre, and Voltaire. I'm pretty sure every one of them was discussed in the narrator's musings, and maybe others as well; for example, the narrator says: "If I knifed somebody on the street, I was a murderer. But if I, like Kissinger, national security adviser to President Nixon, was agreeable to fleets of bombers dropping tons of bombs on thousands of innocent people, then I was a statesman." (The Committed p. 165).
Whew! My head could explode.
Quite a bit of irony and satire -- the best feature of The Sympathizer -- are present in The Committed. This is true especially in the depiction of the intellectuals, but there are lots of little jokes. One criminal, for example, goes by the name "Le Cao Boi." An enemy thug reminds him of the Mona Lisa, so he refers to him as Mona Lisa throughout their increasingly violent encounters. Another ironic figure is a politician/intellectual known as "BFD." This character is a send up of the insanely overrated French intellectual Bernard-Henri Levy, known as BHL One difference: BFD is a crazy fast driver while the actual BHL can't drive at all.
Of the character BFD, the narrator writes:

"BFD and the psychoanalyst, who was also a Maoist and who had completed his PhD, regarded me with a curiosity that soon devolved into disdain, which the French have difficulty concealing, since they consider disdain a virtue." (The Committed, p. 36).
"BFD gave off an air of casual brilliance and cosmopolitanism, with his pink trousers, white shirt unbuttoned to the sternum, lime-green sweater draped over his shoulders with its arms loosely tied over his chest, monogrammed handkerchief, gold Rolex, slightly worn espadrilles, and sockless white ankles." (p. 192).

Over all, I found this novel excessive in both philosophizing and violence. I've read or heard of the intellectuals and egomaniac writers in this canon but the narrator's constant pondering is overwhelming. As for the not-so-philosophical blood, guts, brains, intestines, and dead bodies ... well, you get the idea.
I admit to admiring Nguyen's mid-20th century way of looking at American exceptionalism: "which is how Americans delicately refer to 'American imperialism,' a phrase that one must never say to Americans, who sincerely believe, as all imperialists do, that they have taken over the world for its own good, as if imperialism were a kind of penicillin (for the natives), with power, profit, and pleasure merely being surprising side effects (for the doctors)." (The Committed, p. 218).
As I'm finishing this post, I'm listening to President Biden's speech on March 11. One observation in the speech made me realize that these two books are not only relevant to the distant past. Racism, the hatred of Asian people in our country, and racist violence are more relevant now than ever, and this problem needs our attention urgently.
Review © 2021 mae sander for mae food dot blog spot dot com.

This was an interesting comparison. I found the idea of blood and guts would put me off. I agree that Asian Americans have taken/suffered a great deal of grief. I was reading a conservative web site that criticized Biden for his mention of Asian Americans. The site wanted to have PROOF, because it just wasn't so. I guess they are stuck in their ivory towers and don't turn on TV to see how many have recently been physically abused in PUBLIC. Caught on CAMERA! If only Trump hadn't called it CHINA FLU.

I am not a fan of reading books with lots of violence so this one is not for me.

Very thorough review, Mae, but I'm not sure I will tackle either one of these due to the head exploding comment.

I have The Sympathizer waiting to be read now I'll have to add this to the queue as well.