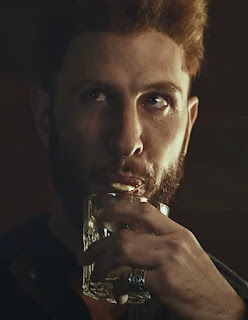 While I loved the novel American Gods by Neil Gaiman, I'm only finishing out the current season of the TV show out of some kind of masochism, as I actually find it pretty tedious. One pretty good character in the earlier seasons was Mad Sweeney, the Leprechaun, played by Pablo Tell Schreiber. Unfortunately, Schreiber didn't choose to act in the current season so Mad Sweeney had to die. Death due to an actor's resignation is a fate that often meets characters in long-running TV series like this.

The premise of American Gods, as you may know, is that the old gods came to America with the people who had believed in them, including in this case, the Leprechaun. Sweeney has the characteristics of the Irish mythical being: he loves his hoard of gold, he drinks beer, and he's pretty violent. Unlike the tiny creatures of actual Irish myth, however, Sweeney is tall and strong and much more dangerous.

There's a replacement leprechaun in season 3 named Liam Doyle. He's a bit tamer than Mad Sweeney, and cuter looking, played by actor Iwan Rheon. Full disclosure: I often sleep through fairly long stretches of the episodes of American Gods. So I might have missed some of the violence, sex, nudity, evil language, and other dangerous features that each introduction warns prospective viewers about.

I wish you a very happy Saint Patrick's Day, and apologize for this rather off-beat post in place of my usual selection of photos from my trips to the extraordinarily beautiful land of Ireland, or occasional photos of corned beef and cabbage dinners. Here are a couple of conventional Saint Patrick's Day images:

I've tried Neil Gaiman more than once and cannot get into him. But Ireland? That's a different matter. I'd love to visit there. Your rainbow shot is exquisite. Happy St. Patrick's Day!

Crow-lover here. And we got a rainbow on our wedding day. It was special as in summer they don´t have rain in Perth. Happy St. Patrick's Day! We sadly don´t celebrate it in Germany...

Neither the book or the TV show sound like my cup of tea, alas. We hadn't watched TV for several years, and have only begun to watch a few things again (mainly things we can stream from Amazon Prime). Currently watching their 7 part version of Vanity Fair -- one of my favorite 19th century novels, and they do a good job with it. Anyway, Happy St. Patrick's Day!

I read American Gods but never tried the tv show mainly because I heard comments just like yours lol It'd be good to have a leprechaun to watch for St Patrick's Day, though.

Wonderful photos. I too can not get into Neil but I would love to go to Ireland. Have a great day today.

We tried watching American Gods and couldn’t stay interested so I was wondering if the book was worth reading. I have read and liked Gaiman’s book The Ocean at the End if the Lane, also liked the tv series Good Omens with David Tennant.

Love the photos of birds! When we visited we wondered about so many black and white birds. We didn’t see any of the more colorful ones we have here.

Hello Mae,
I am not familiar with American Gods. I would love to visit Ireland, it is top on my list of places to visit. Great captures of the birds from Ireland. The Rainbow scene is gorgeous. Thank you for linking up and sharing your post. Take care, enjoy your day! Have a happy weekend! PS, thank you for leaving me a comment.

That bird with long tail looks like the White-bellied Treepie found here. Love the rainbow shot.

That rainbow is stunning and love seeing that beautiful bird! Thanks for sharing your photos of Ireland!