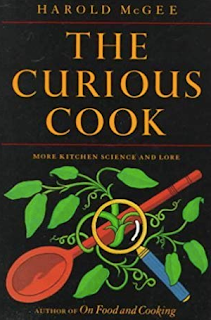 Harold McGee's book The Curious Cook was published in 1992. That didn't stop me from learning all kinds of interesting new things when I read it this week.

As in his earlier book, On Food and Cooking, McGee's main interest is the science of cooking. He looks at currently interesting issues like salmonella in eggs or how to keep lettuce leaves or guacamole from turning brown. He also explores older questions such as whether searing meat really keeps in "the juices" or whether ice cubes freeze faster if you start with boiling water instead of tap water.

Let me start by telling you a few things I learned from McGee about mayonnaise.
I pursued the topic of mayo history, and discovered that in 2013, the popular American brand Hellman's Mayonnaise celebrated 100 years of production. In honor of that anniversary, many writers discussed the same history that McGee had covered 20 years earlier, as well as topics like why some people love mayo and some hate it; why some think its blasphemy to use it on corned beef; or why others find it totally improper to put mayo on a BLT. Here are a few links to the articles I found useful: "On the Etymology of the Word Mayonnaise" from Bon Appétit, "A Brief History of Mayonnaise" from Slate, and a history of the word mayonnaise from the blog Word Histories.

You might be a curious cook yourself, so I'll tell you what McGee said about searing meat, freezing ice cubes, and keeping green stuff from turning brown. If you want to read about his very careful experiments and discoveries on these subjects, you need to get a copy of the book for yourself! His conclusions:


"Searing meat does not seal in juices. Nor does searing reduce the loss of juices. The juiciness of meat is determined by the doneness to which the meat is cooked: the rarer the juicier." (p. 21)

"Hot water can sometimes freeze faster than cold water. In my freezer, ice-cube trays filled with hot or cold water take about the same time to freeze." (p. 190)

"Blemished lettuce leaves darken more rapidly in a salad than leaves with intact surfaces.  ... As long as your knife is sharp, it doesn't matter whether you cut or tear the leaves ... Both vinegar and oil harm the appearance of lettuce, but oil acts more rapidly. ... Leaving the avocado pit in the bowl will keep green only the guacamole in direct contact with it." (p. 72)

You may think you know how a lot of things work in the kitchen, but McGee doesn't let myths, traditional authorities, or old-wives' tales get in the way of his experiments. While TV food science programs and many others have redone some of the tests, especially about searing steaks to "keep the juices in," his ideas are still intriguing and many are not well-known. He may have made a few mistakes (especially about the physics of heat, according to my husband, a physicist), but his results are mostly still very useful.

The copy of The Curious Cook that I read came from the library -- I think I once owned a copy but I don't think I have it any more, and I have no idea why it took me so long to get around to reading such an interesting book!

By the way, in this part of the country, THE mayonnaise to use is Duke's, which conveniently enough, is made very close to us.

Interesting infor. about mayonnaise, but I do prefer making mayonnaise with yolks and olive oil. I couldn't agree more about the juiciness of meat, that's why I always have my steak blue or almost raw :-))

This is a great book! I've had a copy ever since it came out, and I've browsed through it. But reading your post, I realize I've never read it cover-to-cover. I should do that. Super review -- thanks.

Oh, this does look like a cookbook I would enjoy. We made mayonnaise a while back, and freshly made is something truly special. The stuff in a jar, not so much.

Thanks for visiting, btw.

I make my mayonnaise with whole eggs and canola oil so I'm not a purist. I would never put boiling or hot water into my freezer. Sounds like an interesting read.

This one sound very interesting. I never thought about searing as keeping in juices, etc. but because the sear gives a nice texture to the meat. Ice cubes -- who knew? I would have thought the colder the better. The entire book sounds fascinating -- that's one I might have to look out for!

Your post has prompted me to take another look at my copy of "On Food and Cooking". I bought it when it first came out, I believe, but found it to be too technical for my taste. Maybe I've changed.

Many good things happened in 1992. That is the year my hubby and I got married. LOL. This guy sounds like an early version of Alton Brown.

Sounds interesting. My husband likes to put mayonnaise on lots of food that I never would treat in this way!

never gave mayo that much thought but your post was certainly interesting. I do love my mayo

Had not heard of this book. Thanks for sharing so many interesting facts about mayo and meat searing! Definitely learned some useful things. Can't imagine having a BLT without mayo, though :).

I have seen this book but never read it. It sounds like I should though--kitchen science is always so interesting! ;-)

Some folks do love their mayo, my husband being one of them. It brings to mind an episode from a TV program - BBC - called Fawlty Towers. One of the hotel guests is railing on at Mr. Fawlty, about the "salad creme" and this not being proper mayonnaise! He was American of course.

Water in an ice cube tray loses heat by convection (the cold freezer air) and by conduction (the tray sits on a cold surface). Suppose the tray is metal and is placed on a cold surface that already has a thin coating of ice. The tray with boiling water will melt its way into that ice coating and thus be in better thermal contact with the supporting surface and might, therefore, freeze faster than the tray filled with tap water.
--easy to test by doing the comparison with a thin foam strip on the support surface to minimize the conduction.
This probably has been explored many times in high school science projects.
And, I'm sure that Len knows all this already!

Hi Jens,
McGee's experiments in some cases found that the speed of freezing could still be faster even if you controlled for the ice on the shelf, though that was not true for all freezing compartments. His article is interesting if you ever get around to reading it.