The Beginning of Spring 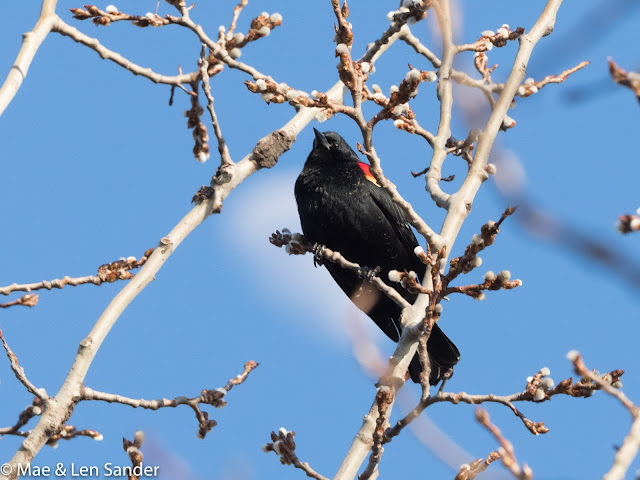 As we walked by the river on Wednesday, we heard the throaty trills of male red winged blackbirds, just returned from somewhere further south where they spent the winter. We also heard the click-click of the females answering them. Several males perched in the trees near the water, which is now mainly free of the ice that was there on our last walk.

Did these birds just arrive from Florida? Mexico? Costa Rica? Perhaps the one in the photo has migrated to and from Michigan for years. According to the Cornell Laboratory:


"The oldest recorded Red-winged Blackbird was 15 years, 9 months old. It was banded in New Jersey in 1967, and found alive, but injured in Michigan in 1983. It was able to be released after recovering from its injuries."


Bluebirds and robins do not migrate from our area, even though their presence is often mentioned as a sign of spring, but this first sighting of the beautiful redwings really does signal the changing season. I hope it lasts!

It must be here! You saw your redwing!

That is an impressive age!

I do love the sound of birds singing.

First time I saw them was on a trip through Ohio. The red spots are so distinctive.

It is great to see the birds returning in the spring. The Red-winged Blackbird has a pretty sound, great photo. Thank you for linking up and sharing your post. Happy Saturday, enjoy your weekend. PS, thank you always for your visits and comments on my blog.

My father loved the red winged blackbird and he’d always point them out to me when they arrived. Our field has a host of robins now and under the feeders I’m seeing that one lone towhee we get every year.

They have such a beautiful song...very distinctive! Love your photo!