Margaret Atwood is a Marvelous Writer 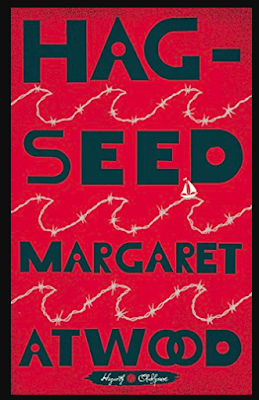 The Tempest, a profound and very popular Shakespeare play, is embedded in a fascinating way in Margaret Atwood's novel Hag-Seed. The protagonist of the novel is a formerly successful theater director living under the name "Mr. Duke," in order to conceal his former prominent identity. As Mr. Duke, he has found a part-time job teaching literacy in a prison, where he inspires the inmates to rethink Shakespeare plays and perform them in their own way.

Atwood's development of this cast of colorful characters is magnificent, and she manages to create an amazing plot for the novel, as well as wonderful re-imaginings of some of the dialog in modern jargon. Also included: a bit of fantasy.

I'll just talk about one feature of the novel: the way that Atwood uses language, specifically, curse words! As the convict group begins their study and performance of The Tempest, they are aware that they will receive points for successful participation in the class, which are used in the prison system of rewards and punishments. Mr. Duke tells them this:


"I want you to go through the text very carefully and make a list of all the curse words in the play. Those are the only curse words we'll be using in this room. Anyone caught using those other words, the F-bomb and so on loses a point of their total. ... Once you have your list, pick ten of those curse words and memorize them, and then learn how to spell them. Those will be your special swear words. You can apply them in this class to anyone and anything. If you don't know what they mean I'll be happy to tell you." (p. 90)

Of course this sets up the situation where Atwood can play with the Shakespearean curses in her invented dialogues and quotes from the prisoners! Here's just one example, in a discussion of Prospero. Mr. Duke begins by pointing out that Prospero is the "the top jailer in the play," having locked up the three inhabitants who were on the island first: Sycorax, Ariel, and Caliban, as well as the shipwreck victims. The convicts continue this conversation:


"Plus he's a slave-driver," says Red Coyote.
...
"Plus he's a land stealer," adds Red Coyote. "Suckin' old white guy. He should be called Prospero Corp. Next thing he'll discover oil on it, develop it, machine-gun everyone to keep them off it."
"You're such a poxy communist," says SnakeEye.
"Shove it, freckled whelp," says Red Coyote.
"No whoreson dissin', we're a team," says Leggs. (p. 131)


Hag-Seed was commissioned for the Hogarth Press Shakespeare series, and published in 2016. When I read Atwood's most recent novel, The Testaments, I realized that this was the only one of her novels that I did not own and had not read. Now I have read them all. Margaret Atwood is a marvelous author whose word play and word sense I have always enjoyed.


This review copyright © 2019 by mae sander for maefood dot blogspot dot com.
If you are reading it elsewhere you are reading the work of a poisonous poxy plaguey thief.

I have like read one Atwood in my life, and not her famous one ;)

What a fabulous way to have students pay close attention to the text! Very clever.

I'm not very familiar with Margaret Atwood's books. I have started a few and didn't particularly liked them and didn't care to finish them but stopped at about page 50. I read her famous one, but found myself scanning the pages after a while. I just can't get into her writing.

@Jackie -- that's a really good list. I have read all of them, though I feel as if I need to reread some of the earlier ones that aren't super vivid in my memory. Thanks for the link!