Venice, November, 2019. Throughout the city waters rose six feet above normal. Tourists in what appear to be disposable over-the-knee boots took selfies in deep water around St. Marks Square, while the basilica, a masterpiece of Byzantine art, received just a little more damage in what might build up to a catastrophe. Local residents in their permanent boots despair.

Winter floods in Venice, once unusual occurrences, are now a predictable occurrence whenever storms coincide with high tides. The city, which is below sea level, has been sinking for centuries. Protective barriers, which may or may not solve the problem, are under construction but delayed by government corruption. Climate change amplifies the results of human actions. 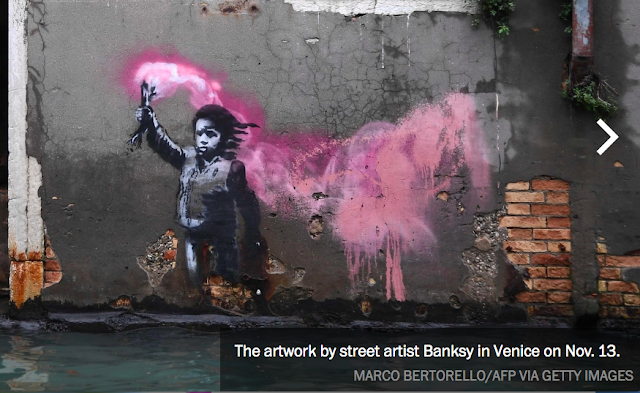 
A quote that captures the Venetians' reaction: "Flooded Venice had tourists taking selfies and residents in tears" --

“The reaction is to cry,” said Flavia Feletti, 77, who has lived in Venice for six decades. “I am afraid there is no solution. When I went out the day after the flooding, I met a kind of funeral in the city.”

Midwest US, November, 2019. Winter has arrived, either one or two months early depending which statistics you read. According to the Weather Channel: "over 400 daily mid-November cold records, including record lows and record-cold high temperatures, were tied or set across the nation from Veterans Day through Thursday, Nov. 14." (source) People respond to a slightly frivolous online challenge: list cities in central and southern US that have temperatures lower than that of Anchorage, Alaska. But this is not a a game.

Here in Ann Arbor we had 11 inches of snow and record low temperatures:

October and November, 2019. California and Australia both have had especially dry and hot weather, with dangerous winds creating conditions for horrific fires. In California, the fires have been worse than those that destroyed whole towns and killed many people last year. In Australia this week, several people and hundreds of koalas died in forest fires in sanctuaries where the habitat of these rare animals was being protected. (link).

Climate and weather are different things: hot dry weather, extreme cold weather, storms in the Mediterranean -- these are weather events. However, more and more extreme weather events indicate that we have gone beyond random happenings. Though I'm not a scientist, I've been reading the results of climate research, and it's clear that we are already experiencing rising sea levels, extreme heat, unusual patterns of warm and cold air like the ones that have warmed the tundra and frozen American cities, and much more.

Does this seem inconclusive, like I don't know what to do? That's what it feels like to me. Our own government seems to be taking more and more measures to make it worse, backing out earlier efforts to reverse or retard actions that increase climate change. Iconic event yesterday: "Just moments after council members rejected measures to tackle climate change, the Veneto regional council — located on Venice's Grand Canal — was flooded for the first time ever." (source)


This post written by Mae Sander for maefood dot blogspot dot com.
If you read it elsewhere it's been pirated.
Posted by Mae Travels at 10:08 AM

Oh Mae, you are definitely speaking my language. You and I are on the same wavelength. Our govt is giving pristine Alaska old growth forests to loggers and oil drillers. This is just unacceptable. It's not JUST to save the forest from being raped, but it's also that this forest helps us BREATHE, something the rapists don't consider or care about. BTW, Wichita, KS was one of those cities that experienced extreme overnight cold temps. It set a record last set in 1911!

Thanks for this incredible post. Yes, I already knew that, but I can't seem to do much about it, even though I try. BTW, I was sick reading about the koalas, which I didn't know until I read your post.

Debbie at Travel with Intent said...

We all know all this! Knowing does not make this stop, neither does Banksy

Thanks for contributing with a lovely Banksy mural Mae.
Your words are just so true, here in Perth we too have had a week of higher than normal temperatures for Autumn. The East coast of Australia is burning... Most governments don't seem to be taking any action, when they should be the ones making the rules and imposing targets for our future well being. It's all very sad.

2005 my ex-boyfriend´s - aka now Hubby´s - apartment flooded for the first time. They built a dam, two years later it flooded badly, the water even got into the bathtub, furniture was all over the place, luckily he was in Braunschweig with me that weekend (and that was when he had it and moved to my place, luckily, and finally).
It´s a strange world. Some countries recycle like crazy (like us here in Germany) and others don´t care at all, pollute the oceans and the air.
And, yes, I remember after the second, "heavy" flood people came to stare, took pics instead of helping us.
What is wrong with some people... And animals have not a chance, yes, it hurts to see the koalas, especially. I once touched one, it felt so special. I didn´t want to, they are nocturnal, but every 4 hours one gets picked off his/her tree by a carer and people really squeeze them! I only touched the fur cause local friends said "I must do it, it´s special" - and it was.

We all know this but governments are too busy selling off forests and national parks to care.

Here in Toronto we have broken records for the cold in November. And early snow.

This is so well written and so very sad at the same time. Yes, we all know this. And we don't know what to do. What is happening with our own government is especially tragic because it is choice on a very big scale. And winter is here early....