"The Starless Sea" by Erin Morgenstern

"Virtual reality isn't all that real if it doesn't smell like anything." (The Starless Sea, p. 304)

"Inside the tent is a table set with a modest feast. A bowl stacked with fruit: apples and grapes and figs and pomegranates. A round crusty loaf of bread. A roasted Cornish game hen. There are bottles of wine and bottles of mystery. Tarnished silver cups waiting to be filled. Jars of marmalade and honeycomb. A small object carefully wrapped in paper that turns out to be a dead mouse [and turns out to be a treat for an owl]." (p. 388)

"... the Kitchen has taken his request for 'all the dumplings' literally but the assortment proves as delicious as it is intimidatingly vast. Single dumplings in countless varieties are presented on individual covered dishes, some accompanied by dipping sauces. Each ceramic cover has a painted scene: a figure going on a journey..." (p. 227-228)

"Zachary picks up the glass. Again, a single word is carved underneath.
"Drink
"The glass contains a small measure of honey-colored liquid, not much more than a sip. Zachary removes the lid from the glass and sets it down next to the carved instruction. He sniffs the liquid. It has a honey sweetness but it also smells of orange blossom and vanilla and spice. ... He downs the drink in a single shot and replaces the empty glass on the stone. It tastes of everything he smelled in it and more -- apricot and clove and cream -- and it has a very, very strong kick of alcohol." (p. 119) 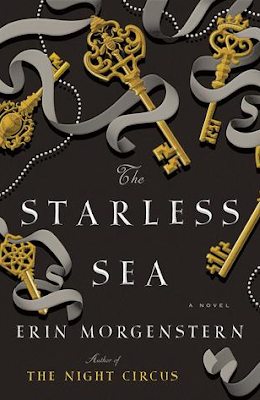 As I read Erin Morgenstern's new book, I loved the very numerous and vivid sensory descriptions of aromas and tastes.

The book has many brief vignettes, little tales that constantly reminded me of other authors: Lewis Carroll, Neil Gaiman, Robin Sloan, the Grimm brothers, and lots more. Sometimes there are direct echoes of other fantasy tales in these short fairy stories and fables that are embedded in the rambling narrative. At times I felt as if I was reading 500 pages of flash fiction, except that these little stories and briefly depicted characters might come back later, sometimes quite significantly, so you better remember all of them. (It's hard.) There are also many reminders that this book is like a fantasy game, and maybe as bewildering.

This book asks a lot of the reader. Concentration is needed. Continuity isn't guaranteed. There's repetition and imitation and flashes of imagination. Repetition of things like doors that lead one place or another, similar to the doors in Wonderland. A character named Dorian has a name that may or may not be a significant echo of the word door. Books, libraries, bookstores, and the like come up all the time.  Also bees, owls, and burned out buildings; fortune-telling and time-shifting; and much more. The foods and aromas and cocktails (especially the sidecar, somehow) are all delightful.

It's a very challenging book. Or maybe I'm just not capable of reading something this amorphous. While I loved, The Night Circus, Morgenstern's earlier novel, I can't say I loved The Starless Sea. Too exhausting.

After writing this, I looked for other reviews, and especially liked the one at the Guardian by Natasha Pulley, which said:


"Although the core of the novel is a simple story about a young man who wants to know his fate, these other strands make such a complex tapestry that the images blur and warp....The Starless Sea rejects older stories: it makes its own. ... Rather than a traditional fantasy novel, this is an artificial myth in its own right, soldered together from the girders of skyscrapers – a myth from and for the US, rather than inherited from older nations. Like any myth, it refuses to decode its own symbols. A reader might find this deliberate vagueness either uplifting or maddening, but the novel’s scope and ambition are undeniable." (source)

This review is written by Mae Sander, © 2019. If you read it at another site than maefood dot blogspot dot com, you are reading a pirated edition. Yes there are pirates mentioned in The Starless Sea but not that kind.
Posted by Mae Travels at 11:44 AM

It makes one drool!
Grimm brothers? Only one tale comes to my mind, Tischlein deck dich, The Wishing-Table.
Ewww, and maybe The Brave Little Tailor, if you care for flies on a jam-bread ;-)

crikey! it sounds way too taxing for my aged brain!:-)

I'm not sure if it's my kind of book, but you're right about the food descriptions!

I have seen where other book bloggers like this book but I had been reluctant to pick it up. Sometimes Gaiman is a good read for me and other times too weird. Love your food references here.

I'm reading this now, so I'll have to come to read your review (I don't like to be influenced)

This definitely sounds like too challenging a read for me. Might take a look at The Night Circus, though. :)

Thanks for this review, I think I'll give it a miss.