"From Hardtack to Home Fries" 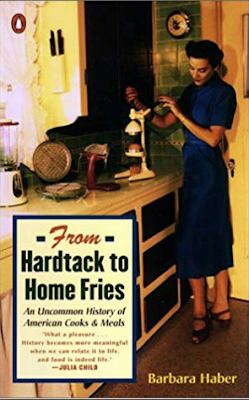 Why did I decide to read From Hardtack to Home Fries by Barbara Haber? I have no idea where I heard of it, and I think it's deservedly been forgotten since it was published in 2002. I found a few of the chapters mildly interesting, but I wouldn't recommend this book.

The title refers to two foods -- hardtack and home fries -- that play a negligible role in the actual book. Someone (probably the publisher) must have felt that a catchy title would make up for the deficiencies in the book. And the subtitle, "An Uncommon History of American Cooks & Meals" could be about almost any food history. This misdirection seems to be a good indication that the book isn't very insightful.

Well, what's the book about? Not much. Most of the chapters seem to be summaries of just a few books on the chosen topic. For example, the chapter on Black American cooks simply summarizes several cookbooks by well-known authors like Leah Chase and Edna Lewis. There are a few remarks about how black women weren't given credit by many white authors who stole their recipes and didn't acknowledge them, but not much serious exploration of historic trends or attitudes.

The chapter on the Fred Harvey company and the Harvey Girls who went out west with the railroads is similarly devoid of what I would see as helpful insights or background. It didn't even mention the most famous thing about them: the movie with Judy Garland and several other famous stars. I've read much better treatments of the history of the Harvey company, its founder, and its innovations.

The chapter on Sylvester Graham and 19th century vegetarianism was also devoid of much insight into social history. It tried to cover far too much ground about two centuries of food fads and diets. Ultimately, it was pretty plodding, and disconcertingly ended up with a discussion of celebrity food memoirs, one by actress Elizabeth Taylor. Again, I've read much better books about this part of history.

An obscure topic was a chapter on the history of a shop and bakery in Cambridge, Massachusetts, where refugees from Nazi Germany and later from Eastern Europe were given jobs to help them adapt to American life. There's a lot of effusive praise for the women who worked there, and not much substance about refugees or historic issues. The treatment of this shop doesn't really provide the reader with much substance about American social history, and in the end is quite disappointing.

The last chapter, which is sort of about Gourmet magazine, is probably the worst, but I don't want to keep repeating myself. In sum, I didn't like the book. I don't recommend wasting any time reading it. And I wonder what caused me to buy it!

Oh dear! I hate when a book is so bad and you’ve wasted your money and time reading it. Very annoying for you. Sounds poorly written and lazy.

Good to know. Had not heard of this (like you said, probably rightly so) but I am a sucker for foodie books. I will steer clear.

I'm always so disappointed when I read a book that is bad. There is so little time and so many books.

Sounds like they missed a real opportunity to tell some interesting stories.

Oh. I really at first read "from heartache..." and had to look up hardtack then!
Sad you had a mediocre read.
Guess "Fried Green Tomatoes" probably was more fun and "informative"?
Next T-Day I might publish Königsberger Klopse that we had today and you really make me try to found out about the history! (My Mom came from near Königsberg).
When a book turns out real bad, I usually skip it, or try another chapter and then put it away for good ;-)

I love your honesty when you write about books. I'll give it a pass!

What an interesting book title. Thanks for sharing!

I love foodie books but will avoid this one after reading your review. Too many books to read to spend time on a bad one, I've decided. Have a good rest of the week!