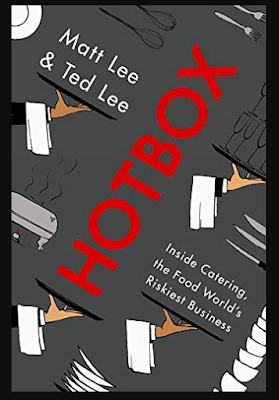 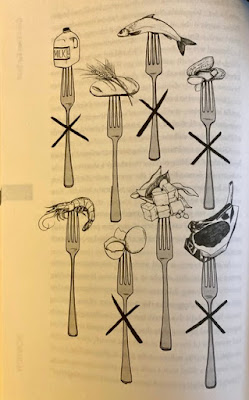 New York food ways are not the food ways of the rest of the country. Not enough billionaires. Matt Lee and Ted Lee have written a very revealing book about how New York billionaires' catered party food (and that of a few slightly less wealthy New Yorkers) is created or designed, presented to party planners and party givers, and then cooked, delivered, and served. Because the emphasis is on the workers in the catering industry, the billionaires don't spoil the story -- they really don't talk to the help anyway.

What do billionaires eat? Here are a few examples:


The hotbox is the appliance that makes it possible to serve such food in venues where there's no kitchen at all. The hotbox, effectively unique to the catering industry is "an upright aluminum cabinet on wheels ... that conveys the partially cooked food from the refrigerator at the caterer's prep kitchen to the site of the party.... Once on-sight the hotboxes are emptied and transformed into working ovens."  (p. 4)

The heat source for a hot box is cans of Sterno in startlingly large numbers: enough to finish cooking partially cooked food and heat it to serving temperatures. Or these boxes can keep food cold with the use of dry ice. 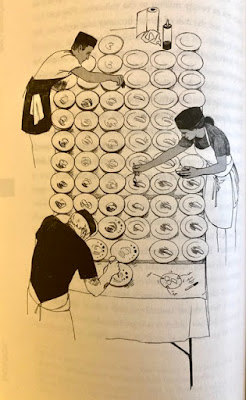 Most fascinating: the techniques for making them work include a vast number of ingenious tricks and strategies. And the workers who understand this are wizards! Without the hotbox, the entire method of delivering food to exotic party venues would be impossible.

Hotbox: Inside Catering, the Food World's Richest Business by brothers Matt Lee and Ted Lee is enjoyable, informative, well-researched, and well-written. The illustrations are entertaining too: I've included a couple of scans at right. The two authors researched the subject by working for catering companies over a period of years. They really worked! And the work ranges from hard to grueling.

These authors weren't just journalists who embedded themselves for a few days. The Lees really got to know and respect the people who did the labor, as well as understanding the relationships among the various businesses that allow million-dollar (or more) fund-raising dinners, weddings, political dinners, bar mitzvahs, and other events to be held at kitchenless venues such as the Metropolitan Museum of Art or big meeting places without food facilities. They wore the "polyester black pants, black clogs, and untailored white chef's jackets," (p. 79) and received the same salary as the other workers.

The best feature of the book, in my opinion, is the numerous interviews. These reveal the skills and responsibilities of the workers who staff the temporary kitchens, where the authors were working alongside them. They explain the rationale and challenges of chef-owners of catering companies who hire these workers. They delve into history through interviews about the origin of modern kitchenless catering in 1970s New York. They reveal the statistics of vast quantities of rental items -- obvious like cutlery, dishes, glassware, and tablecloths, less obvious like special wooden tables to give a party a rustic look, or special covers for fancy hors d'oeuvres.

I was never bored or impatient with anything in this book, though I didn't know I would be interested in the subject. I think that's the mark of really skilled and thoughtful authors. It's also really fun to read!


This review © 2019 by mae sander for maefood dot blogspot dot com
Posted by Mae Travels at 8:14 AM

This does interest me. Are recipes included in the book?

I have one of the Lee brothers cookbooks -- it's pretty decent. And this book sounds better than decent! This sounds like an interesting, although a bit quirky, book. Fun read, I'll bet. Thanks for the excellent review.

@Day in the Life — the recipes are for catering quantities. For example, How to make 600 portions of pasta salad IN YOUR BATHTUB! It’s really not a cookbook, though the authors have written other cookbooks.

Thanks for commenting! ... mae

I think I've seen a hotbox before but I had not idea they were so versatile - I thought they were just used to transport food. This book sounds fascinating.

That’s interesting, I’d never heard of Lee brothers. You have the most interesting books.

My niece is in the catering business -- I'll have to tell her about this book.

This sounds so interetsing, I know a few people who will be getting this books for Christmas.