New from Martin Walker: Another Bruno Chief of Police Book 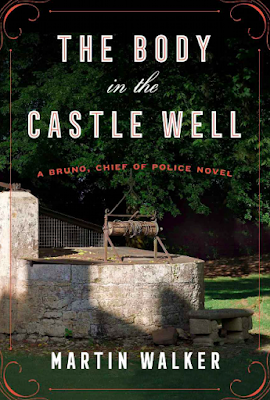 The latest in the long detective series about Bruno, the chief of police in an absolutely ideal little village named St. Denis in the south of France, was published last week. If you haven't read any of this series, you have some fun in store. The new book is good -- but if they are all new to you I would suggest starting at the beginning and continuing until you tire of them. (The Penguin website lists all 14 of the Bruno books they have published.)

The Body in the Castle Well includes most of the themes that I have enjoyed in the earlier books. The delightful local foods of the village, politics and police business, the suspense of the investigation of a suspicious death, many vivid characters, and the weight of 20th century history all play a major role in creating a readable detective story. Every book offers tons of local color, including Bruno's daily pastimes of horseback riding and rough-housing with his dog Balzac -- and especially his cooking. But there's always a new plot, new twists in the relationships of Bruno and his friends, and new foods to savor. I'm always ready for Walker to spin the latest tale!

FOOD! As always, the new book offers mouth-watering restaurant descriptions and a few market visits, but not as many as in other books. Bruno cooks for his friends, for visitors to the village, and in this book makes dinner for the children of one of his friends. Details of how he cooks each course of a meal, as well as the wines he serves with each course, are a highlight of the book. You could almost follow the steps and make the food yourself, if you could get the remarkable local ingredients. I read them all with relish, most of all the preparation of his very elegant dinner with a lamb navarin which required several days of preparation and many vegetables fresh-picked from his garden.

I really loved the description of Bruno's cooking for two small children for whom he agreed to baby sit for an evening when their mother, one of his many friends in the village, can't find anyone else. The dish he makes them is spaghetti -- and his approach to this task was quite different from other food prep scenes in this and the many previous books:


“But first, which of you is going to teach me how to cook?” he asked.

“You cook all the time,” they cried.

“But this is magic spaghetti, and I don’t know magic. Balzac hasn’t taught me yet, but he says you two know how to cook it. Should we go in the kitchen and find out? Then we can have dinner and read a story before bath time.”

“I only know the simple stuff,” said Bruno, washing his hands before peeling and chopping two onions and then cutting three tomatoes into rough chunks. “You two have to find the saucepan and the frying pan.”

The children began to forage in cupboards.

“Now I need salt and pepper,” he said, and Daniel climbed onto a stool and pointed to where they stood on the table. Bruno found duck fat in the fridge and began frying the onions and put a kettle on to boil.

“Where does Maman keep the spaghetti?” Dora pointed to a cupboard.

“That’s where she keeps the ordinary spaghetti, but we don’t know where the magic one is.”

“Balzac will tell us,” said Bruno, tossing the meat into the softening onions, adding salt and pepper and stirring the pot. “He only eats the magic spaghetti. Now you need to break up the spaghetti sticks so the bits are each as long as your finger, otherwise Balzac won’t eat them. Now can you set the table, a plate for each of us, a fork and spoon, and a plate for Balzac. If you want apple juice, you need to set a glass by each plate.”

The water was boiling, so he poured the contents of the kettle into the saucepan, added salt and then the strands of spaghetti, now broken into child-sized pieces. He added the chunks of tomato to the mixture of meat and onions and began stirring, then he brought two stools close to the oven and stood a child on each stool so they could watch.

“Now we say together after me the magic spell.” He began to chant, making up the rhyme as he spoke:


SUSPENSE! Which of the suspects pushed the murder victim, a charming young American, down the castle well? Or was it a tragic accident? Bruno has to interview a lot of people, understand their complicated motives, and figure it out. He has to deal with his superiors in the French police system, and convince or ensnare them to do what he needs them to. As always, there are special challenges: here especially because the dead woman was an American and her family were very highly connected, so he has to deal with their interference. In the end, the solution to the mystery was so complicated that I had to work hard to follow what had happened -- a tiny bit disappointing on this level. But I enjoyed it.

POLITICS! Walker makes use of every possible area of political conniving and power struggles -- within the police force, on a national French level, on a local level among the villagers (rivalries, ideologies, race relations, etc.), in union elections of local high school teachers, due to residual resentments leftover from people's school days, and more -- in this book, even American politics. I always find that the political challenges to Bruno's investigation are very amusing and interesting.

HISTORY! In this case, the historic background of the novel's key characters includes World War II, the Algerian war and its aftermath, the French colonial war in Vietnam (which as you probably know was prior to the American Vietnam War), the lasting importance of De Gaulle, modern political ideologies and how they relate to past events, and international relations especially with Americans.  In this book, art history and the provenance of paintings also had an important role. As always, Walker informs the reader painlessly what all this history might mean to the residents of the small town where Bruno works. And makes it rather intriguing.

BRUNO AND THE TOWNIES! The only thing that's less prominent in this book is that Bruno, who is of course central to every one of the books, has only a bit of interaction with the local farmers, aristocrats (except those directly involved in the mystery), and townspeople than in other books. This time we don't see him coaching sports, helping the needy, buying fresh produce and game or trading with the producers for things he makes himself, or helping out with kids' activities. He does belong to an association for judging and promoting the local foie gras, but the description doesn't have as much passion as that of the local events in other books. Another village event he is involved in, a concert, doesn't play as big a role as similar events in earlier books.

I avidly read each new Bruno mystery for the suspense, for the vivid characters, and for the idealized view of this rural French village that's really Walker's greatest invention. It's the village everyone hopes to find on a trip to France, which preserves all the wonderful old time rural happiness and virtually none of the downside, and introduces only good things from modern life: like cell phones! The perfect honesty, personality, resourcefulness, and ideals of Bruno, of course, are always central. It's a pity there has to be at least one murder victim in each book, but that's the price you have to pay for such a fun read.

This post is written and published by maefood dot blogspot dot com.


If you see this posted at another blog, it's been stolen.
Posted by Mae Travels at 9:33 AM

Mae, thank you for the link to the list of all Bruno books. I downloaded the first one from the library. I love detective stories and mysteries, and have been looking for a good series after reading all Patricia Wentworth books.

You should link this one up to Paris In July! I loved the one Bruno book I read last year and hope to do the whole series. (In my spare time -- I wish I read as fast as you!). That cooking scene is adorable. I'll have to remember that in a year or two when we make pasta for the boys! And I loved all the things you included in this review. Lots of perfect info for one not initiated and even for those of us who are!

Thanks Mae, I didn't know there was a new one out. I've enjoyed all the rest and now have this reserved at our library.

I've read The Patriarch but I'm not a big mystery fan. I do remember all the food that was included in that novel though.

Mysteries seem to go with France much like food goes. I wonder why that is.

Does anyone know if these have ever been made into a mini series? or TV show? By your descriptions Mae, I feel like I could watch this with ease and enjoy the suspense, mystery and historical links.