Indian Food in a Mystery Story 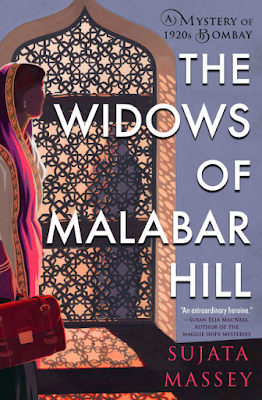 The Widows of Malabar Hill by Sujata Massey (published 2018) contains a murder mystery, but the major part of the book is more of a social history novel. A young woman named Perveen Mistry is the only female lawyer in Bombay in 1921. She's exceptional because she had studied law at Oxford, and she is able to do limited law practice in her father's successful law office, though she cannot be fully admitted to the bar.

Her family are members of the Parsi community, a small minority with its own religion, social structure, and customs. The law case that Perveen takes on involves a polygamous Muslim family: specifically, three widows whose husband has died, and who are depending on her father's firm to settle the estate among themselves and their children. Further, Perveen has a good friend, Alice, whose father is a high official in the British government, and who participates in her work on the case.

Under British rule, the traditions of each community are recognized and have the force of law, especially in areas of marriage, divorce, and division of property after a person's death. The plot of the book, including Perveen Mistry's own back story, offers the author a chance to provide a great deal of information about these communities, especially about the very difficult status of women in India under British rule 100 years ago -- including Parsis, Muslims, and even British women like Alice, who wanted freedom and the right to pursue a career.

I loved the background of foods that Perveen loved to eat and that women cooked (sometimes whether they wanted to or not!) There were many food names that were completely unfamiliar to me, and very intriguing. Early in the book Perveen visits a shop where a young girl was working -- a girl she hoped would get an education, but was probably going to end up working for her father's bakery; Perveen wants to buy a special cake called dahitan to bring to her friend Alice, just off the boat from England. The shopkeeper says: "The dahitan were fried an hour ago and are soaking in sweet rose syrup. And of course, there are the cashew and almond fudges, and the pudding and custard cups." (p. 9).

Then there's lunch brought to the law office, that was cooked by John, the Mistrys’ Goan cook. "John had worked hard preparing lamb koftas, a tamarind chicken curry, a thick yellow dal with mustard greens, and caramelized rice. He’d also sent tangy vegetable pickles, fragrant wheat rotlis, and a tin of almond-honey brittle large enough to last a week." (p. 11). This lunch is followed by "delicious tea, a mixture of Darjeeling brewed with milk, cardamon, pepper, and plenty of sugar." (p. 14).

As the story of Perveen's interaction with the widowed clients of the law office proceeds, there are many flashbacks to her now-dissolved marriage a few years before, when she was a young teenager. This was a very fraught story, but I'll just quote the menu of her wedding feast, including a few unfamiliar food names: "The menu contained the requisite succession of Parsi wedding dishes: steamed fish, fried chicken, egg curry, lamb curry, sago crisps, carrot-and-raisin pickle, and an extravagantly seasoned mutton pulao. Dessert was kulfi and lagan nu custard, but Perveen was too full to manage more than a few spoonfuls of each creamy dessert." (p. 139). And during life with her husband's family, she suffered from her mother-in-law's insistence that she labor in their kitchen: "Perhaps your mother’s servants cooked with prepared powders, but here we grind on the curry stone every morning!" (p. 149).

Perveen rarely goes into the kitchen to help when she is living in her parents' home with family including her brother Rustom and sister-in-law Gulnaz. She's mainly occupied with working at the family law firm. But there was one occasion: "Perveen went to the kitchen and saw Gulnaz at the stove. She was tempering cumin seeds and onion, making the tadka that would top a pot of yellow dal Perveen’s mother was stirring. ... The meal was a good one: lamb curry with fenugreek and potatoes, coconut dal, a chicken and tomato curry, and a savory rice pulao." (p. 250-251).

Near the end of the book, Perveen's English friend Alice comes to their home to meet Perveen's mother Camellia and her sister-in-law. John, their cook, serves a lunch of "fish, potato curry, chapatis, dal pulao, and kachumber." The word kachumber especially caught my eye: it's a cucumber and tomato salad with onions and lemon juice; in other words, a salad that I often make myself!

The conversation about this lunch:


“Do you eat like this every day?” Alice was already reaching for her fork and knife.

“Of course. Will you eat pomfret?” Camellia asked.

“Yes— but where is the fish?” Alice stared in amazement at the steaming banana-leaf package that John added to her plate.

“It’s patra ni machhi, a Parsi specialty,” Gulnaz said. “You don’t eat the banana leaf. When you open it, you’ll find a lovely fillet with a coconut spice paste on top.”

“It’s delicious,” Alice said after a bite. “But did you leave off the chilies for me?”

“I thought chilies might hurt your stomach,” Camellia said. “Am I wrong?”

Although I was disturbed by the brutal descriptions of how badly women could be treated in Bombay 100 years ago, I found The Widows of Malabar Hill to be a very readable, interesting, and highly informative book. The detective story parts were suspenseful. The social history parts -- though very fascinating -- sometimes seemed a bit out of proportion to the whole.

The social history would be the best part for me so I need to check this out.

Oh, yum! And a good mystery too!

"Bring the chilies!" is my motto. :-) Sounds like a fascinating book. I really like Indian food, so I'd thoroughly enjoy drooling over all the good stuff they're eating in this.

This might be a nice read for my book club---I always love when food is mentioned, especially with details :)

I have a copy of this somewhere in my house ... I'll add it to my list.

An interesting book, it sounds like you got a real feel of life 100 years ago in India.

I don't read many mysteries, but I do love the sound of the social history in this book. All the excerpts you shared have me drooling. I love Indian food and don't eat it often enough.

I'm not sure I could bear reading about the conditions of women, but the food sounds wonderful! I love books that talk about food!

The salad sounds really yummy and I just put chilies on my shopping list :-)
I think "Tandoori Chicken In Delhi" by Madhur jaffrey is a good read, too.

I love reading stories set in India. I especially enjoy historical fiction with women as the protagonists, as I am very interested in the lives women led in the past. This sounds like a book I would like.

Oh yes, I heard a lot about this one, I had it on hold at the library... before we went into lockdown. Indian literature and Japanese literature have this in common, food takes a great place :)