Cooking in My Kitchen

In the kitchen in February not many items are new, but we've been enjoying a number of dishes that we haven't tried before or that we haven't had for a long time. I'm sharing, as usual, with the blogger event "In My Kitchen This Month," hosted by the blog Sherry's Pickings -- link here. 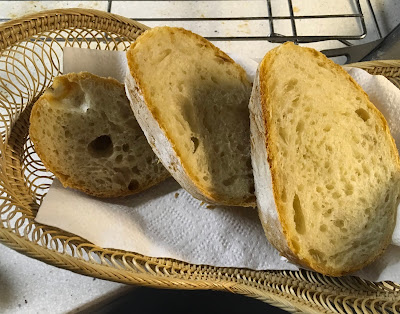 A few more items in & around the kitchen in February:


My new figurine is by a Hopi ceramics maker named Tony Dallas. The faces on these figures are the faces of the mudheads, a type of clown that appears in Hopi ceremonial dances, and which are sometimes depicted in Kachina figures (see below). The small child on the storyteller's right is holding a special type of Indian doll that's flat and made of wood. I photographed my new storyteller with a tumbler figurine by the same artist.

I have a few other storytellers and various southwest Indian figures, which I find very appealing. Storytellers were first made by Helen Cordero of the Cochiti Pueblo in the mid-20th century. They became very popular and are now made by potters from many Pueblos.

I think I'd better make breakfast. Wish it was pancakes from Len's sourdough! It all looks delicious, Mae, and love you are trying new things. We had a bottle of that Jadot Beaujolais brought to Cork Poppers. Very good indeed!

wow So many mouthwatering foods. Steak is definitely my favourite, and that fricasseed chicken looks fantastic too. Your sourdough loaves are for sure bakery perfect.

You certainly have had some wonderful dinners in your kitchen. I have several of Marcella's cookbooks but have never made with dishes you prepared. Time to got those books out again.

Love that cookbook, great recipes in it! Your pork dish looks really delicious!

Love seeing your sourdough cooking - wonderful loaves and the pancakes with the mustard sauce sound great. Your hopi ceramics sound like they come with wonderful stories. And I was quite admiring the plate that the pork dish was served on.

I had this book and it’s excellent! Sadly, I loaned it to someone and didn’t get it back. That will teach me, I guess. The pork dish looks very good and I never thought about using the bread starter for pancakes. Great idea.

I have that book too. Nice bread!

Y'all have been eating good! All of the dishes look good but the pork with carrots and broccoli stands out to me.

hi Mae
i started a comment but not sure i finished it :) love your Hopi figurines. i'm a bit of a collector of unusual figurines myself, as my groaning shelves testify. thanks so much for being here in IMK again. the fricasseed chicken looks very tasty, except mind the tomatoes for me:) I love the ceramic plate that the pork dish is on; you know me and ceramics. yum to sourdough pancakes especially with salmon. i get very antsy about plastics these days too. i emailed a company here that has started to put their vinegar into plastic bottles rather than glass but they weren't interested. i won't buy from them anymore and will tell them so! Have a great month. see you in april! cheers sherry x

I love what you did with your starter. I really want to get back into baking.

That moulded plastic would have put me off buying the mangoes. What a waste. Love the recipe book, and all the dishes you have shared. Made me feel quite hungry! And happy anniversary to you too :)

Mae, I like your fish-shaped serving plate -- the ceramic one, too -- and your penchant for trying old and new recipes. (I've been on that kick myself.) All of your dishes look appealing -- nice plating! Your figurine collection is fascinating, too. History is being preserved.

Fricasseed Chicken Abruzzi Style? Shut the gate! That looks so good. We have visited parts of the South West and have had a very small amount of exposure to Hopi culture so I was interested to see these figures. All the best for the coming month. Fiona

Your Hopi ceramic figurines are gorgeous! I like to use my leftover sourdough starter in waffles. You have to prep them the night before, but they're delicious. =)