"The important events in our lives are always the result of a sequence of tiny details. The thought made him feel slightly dizzy – or was it the fact that he’d drunk a whole bottle of Pouilly-Fuissé?" -- Antoine Laurain, The President's Hat (p. 25). 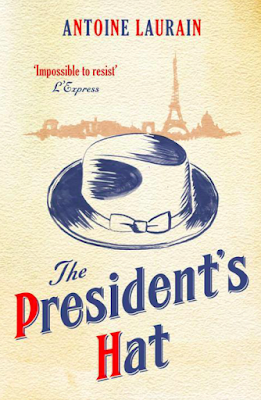 Do you love novels that capture the real sprit of Paris? My impression is that The President's Hat, a very short novel by Antoine Laurian does just that, and does it mischievously.  The book, written recently and published in 2012, is full of the spirit of a recently bygone time in the late 20th century.

You get the atmosphere of a bistro "with its big red awning, oyster bar outside, and waiters in spotless white aprons." (p. 13). You imbibe the social position of a renowned perfume inventor or a member of the former aristocracy with his home full of inherited antiques. You smell "Sicilian lemon, bergamot, green mandarin, tangerine, cypress, basil, juniper berry, cumin, sandalwood, white musk, ylang-ylang, patchouli, amber and vanilla." with the famous perfumer (p. 67).

You see the contrast between people who appreciated or despised new city projects, summarized thus:


"François Mitterrand knew how to make his mark, earning his place in the history books as well as on the world stage. Sticking a glass pyramid in front of the Louvre, striped columns outside the Palais-Royal and a modern archway in line with the Arc de Triomphe smacked of an utterly anti-conservative, iconoclastic mentality – verging on the punk." (p. 150).

In real Paris, the newspapers that Parisians read (Le Figaro, Le Monde, Libération?) can define their outlook on life as well as their politics -- and in Paris, people aren't private about their political views.  Before the infinite choices offered by the internet, only a few TV channels were available, so at certain times of the day or week, you could expect every Parisian family to be watching a particular program: "The Larniers confessed to keeping their set solely for the purposes of watching Apostrophes." (p. 128).

If you want to know things like this, you can read this very funny little novel about a magical hat that is forgotten one evening by none other than Mitterrand, President of France, and then successively worn by several characters who are magically transformed by possessing it.

The first of these lucky individuals is a family man with a humdrum job and an annoying boss. One evening, he manages to dine alone in the bistro with the red awning:


"A meal all on his own, with no wife and no child, awaited him inside. The sort of meal he used to enjoy occasionally before he was married. Back then his salary hadn’t stretched to anywhere as smart as this. But even in the modest establishments he’d frequented, he had always eaten well and never felt the need of company as he savoured andouillette, a decent cut of beef, or a dish of whelks. The fading light held the promise of a bachelor evening. (pp. 13-14).

He orders oysters. He savors the oysters, dipping them in vinegar the French way. He eavesdrops on the conversation at the next table where he's astonished to realize the President of France is dining with friends. As he leaves, he picks up the president's hat, somehow left on the coat rack. Putting on this hat somehow (in this world of magical realism as well as Real Paris) emboldens him; the next day, he's able to shine in an interchange with his superiors and get a much better job.

Not long afterwards, the hat leaves him, and in turn becomes the property of several more typical and unsatisfied Frenchmen and women. More oysters are eaten -- "fines de claire gillardeau, a crab, two types of clam, langoustines, whelks, sea violets, sea urchins, prawns and winkles." More Pouilly-Fuissé is drunk; also Chevalier-Montrachet. (pp. 99-100). Each individual who briefly wears the hat embodies a certain typical French personal uniqueness. The many aromas and flavors and TV programs and political conversations and professional aspirations present a cross-section of life in 1980s France. All in magical fun.

This is my second time reading a novel (in translation) by this very French author: the first was French Rhapsody, which I wrote about here.
Posted by Mae Travels at 6:00 AM

One of my favorite all-time books is Laurain's "The Red Notebook." Now I KNOW I have to add this one to the pile and when it arrives move it to the top of the bookstack! (Why couldn't you have written this three days ago before I placed my latest Amazon order?!!!) I think your review is as beautifully written as the writing in the novel!

That sounds like an entertaining book, I like the muse of the magic hat. Lots of good food mentions too .