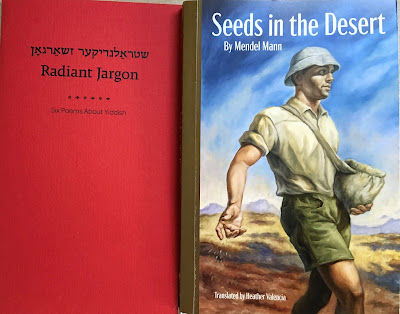 A few days ago, the Yiddish Book Center in Amherst, Massachusetts, sent me two recently published books as a bonus for a recent contribution to their efforts. Publications of newly translated books are part of the center's mission to make available lost or ignored but worthy representatives of Yiddish literature. The smaller work, Radiant Jargon, contains a small selection of poems about Yiddish and translation: some of these poems are by classic Yiddish authors from the early 20th century, and others, and also translations, by modern poets, some of whom have been interns at the center.

The more substantial book, Seeds in the Desert by Mendel Mann (1916-1975), contains a selection of short stories and sketches about the early days of Israel, the lives of Jews in Eastern Europe during World War II, and other vignettes about Jewish life in the mid-20th century. The introduction also provides an interesting summary of the life of the author, whose name and work were entirely unfamiliar to me up until now.

Many of the stories offer just a very small episode from life in Israel or elsewhere; however most of them inform the reader of how these new Israelis had survived and escaped their past. Some stories are set far from Israel, for example, the story "Laughter from the Skies" (p. 96-103) takes place in the Australian outback about a Jew who takes revenge on a former Nazi who had murdered  his family. Another story, "Cain Laments at Night" (p. 114-119), set during World War II, is about a Jewish boy named Emmanuel. He was hiding in a shtetl from which he was to travel to the larger town of Rovno (also called Rivne), but he was unable to keep up his pretense of being a partner with some Ukrainian soldiers. The problem occurs when he encounters a market woman wrapping her goods in pages of the Talmud, which he takes away and pockets. With the soldiers, he consumes "pork, black bread, eggs, and bottles of vodka," but despite this un-Jewish act, they notice him respectfully holding the scrap of paper, and torment him. Emmanuel, too, takes his revenge.

A very typical story in this collection is titled "The Encounter in Ramat Gan" (p. 59-64) It begins with these words: "'Excuse me...' I said. 'I think I know you... we've met somewhere before...'" The narrator was speaking to a woman on the street, walking with a small child. He describes a hot day in Ramat Gan, where he was waiting for a bus. He tries to explain to her what he remembers: "I traveled across Ukraine with the Soviet army, and somewhere in a shtetl in Volhynia I met you. It was  a strange encounter. Don't you remember the Russian soldier who talked to you in Yiddish? Have you forgotten a night journey in a truck with two armed soldiers?" She denies this: "I don't want to know you!" she shouted.

The narrator thinks about her all night. In the morning he sees her again, while waiting for his bus, and follows her. Angrily she says "The woman you met is dead. She doesn't exist any more." She calls their former meeting a surreal dream. She accuses him of trying to make a legend of his past. Then she produces a long story of how they met during her ordeal during the war, her abuse by peasants, her encounters with Russian officers, and more war stories. The narrator, she recalled, had been a Jew in disguise as a Russian soldier -- obviously hoping himself to evade the murderous Ukrainian and Nazi troops. She describes how he helped her get to the Rovno where there were "thirty Jewish families," and he could leave her with an elderly Jewish women who would protect her. But after telling her detailed memories, the woman concluded: "Everything I have told you was invented, a lie, a mistake. My life has started now, here, with my husband and children. Forget, and let me forget."

A majority of the stories in the book have a certain similarity with this encounter and with the woman's wish to erase her past. The new country of Israel, where most of the stories take place, offers a new life for the former victims of European persecutions. The sun burns hot, it's difficult to earn a living, and many of the characters struggle to adapt and to earn their bread. But it's all new and full of promise. I've made it sound simplistic, which it isn't -- it's a very interesting book of stories about a few moments in the lives and memories of a variety of characters.

Now, about Rovno, which is mentioned in several of the stories, along with a few other nearby locations in a region of Ukraine. These references were especially interesting to me because my mother's parents and other relatives came from the Rovno shtetl in the early 20th century. I've never known much about it other than generalizations about shtetl life. I suspect that some distant relatives were still in Rovno during World War II, but I don't know anything about them, and I was fascinated (when I looked it up after reading Mendel Mann's stories) to learn that Rovno was important during the early days of the war. In looking for information, I was also astonished to learn that the mother of Israeli author Amos Oz was a native of Rovno (source).

I also learned of the end of the Jewish community of Rovno, which the author of the stories must also have known. I read this: "The majority of the Jews of western Ukraine town of Rovno, around 23,000 people, had been murdered shortly after the Germans invaded in June 1941. Between 5,000 and 7,000 Jews remained in the ghetto that was established there." In July of 1942, the remainder of the Jews were murdered in a cooperative act by the SS Nazi soldiers and the Ukrainian militia, which supported the invaders. (source)

Thanks for the Blog, The street name on this picture is OBWODOWA

I'm impressed with your interest in Yiddish literature. I was born in north-east Romania, in that part which bordered with Ukraine. During WW2 my mother was exiled to Ukraine, where she lost a kid and a young sister.
I can speak a little Yiddish -wonderful language. I'm glad about the translations from yiddish done by the Book Center in Amherst.

My grandfather was born in a Shtetl in Romania. I just cannot imagine what their lives were like! Thank you for sharing Seeds in the Desert - I am going to see if I can get a copy.