During our quiet time in Tel Aviv at our cousin Janet's house I have been doing two things. First, I'm helping Janet clean her house in preparation for Passover. This is an activity I've often heard and read about, but I have never participated in doing it. Quite a production!

When I have a bit of time, I've been reading a novel set in Israel titled Three Floors Up by Eshkol Nevo, published in Hebrew in 2015 and in English in 2017. 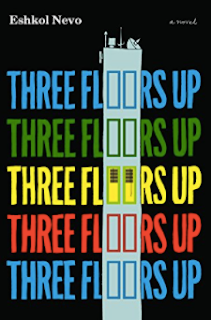 Three Floors Up takes place in a three-floor apartment building in Tel Aviv. I am surrounded by similar buildings of various heights, but full of people that I imagine to be similar to the families in the three stories in the novel: one for each floor of the building. Each story is told by one person, as a confession, because each character is experiencing a kind of personal (and maybe existential) crisis.

The first story, by a husband and father on the first floor, is told to a friend who is a novelist, as a desperate confession of some very irrational behavior towards a neighbor, triggered by fear of the well-being of his 9-year-old daughter. The second story, by the mother of two children on the second floor, is a letter calling for help from a long un-contacted friend who had supported her during an adolescent crisis. Finally, a retired woman court judge, who lives on the third floor, records messages on an answering machine where she finds a message from her late husband. Though he had died a year earlier, she speaks to him as if he were still alive and referring to their long life together.

A significant passage from the widow on the third floor to her late husband:


"The Encyclopedia of Ideas helped me remember that the first floor, which he called the id, contains all our impulses and urges. The middle floor is the ego, which tries to mediate between our desires and reality. And the uppermost level, the third floor, is the domain of His Majesty, the superego, which calls us to order sternly and demands that we take into account the effects of our actions on society.

"I hear you asking in that tone of yours, which hints that you know the answer quite well: Is there any proof whatsoever of that theory? Has it been tested, proven scientifically?" (p. 211).

You can read the three narrators' confessions as an allegory of the id, the ego, and the superego, but I prefer to see them as three stories of very troubled individuals, not as "types." The internal struggle of each one is emotionally vivid. But besides enjoying the human element of these stories, I found the book to be wonderfully connected to the travel experience I had last week and to my continued stay in Israel in a residential neighborhood like the one where the characters live.

In the final story, the retired judge who is "talking" to her late husband agrees to go on a trip to the south of Israel, where she finds herself on an agricultural kibbutz near the Jordanian border. We went birdwatching on a kibbutz that is no doubt very similar. So I'll end with a few photos of the agriculture and kibbutz life that we saw as we looked for birds.

Sounds like an interesting book. And as always, love your pictures -- thanks for posting them.

What a great sounding book to be reading with this landscape and backdrop.

The book sounds fascinating -- not an easy read but perhaps an enlightening one. And good timing, given your locale. And as always, I love your photos.

But here's a question -- which I hope isn't ignorant but what is the difference of cleaning the house for Passover vs. just cleaning it in general? Are there certain things you must do or supplies you use because of the holiday? Or is it more like just deep cleaning for spring (I say that like I do it -- I wouldn't know how to deep clean if I had a gun to my head.) I know a little (not much) about kosher kitchens and that sort of thing but not about the whole house. Thanks!