"At noontime the next day she made Zach tomato soup from a can and a grilled cheese sandwich. He bent his head close to the bowl and ate half the sandwich with his thin fingers, then pushed back the plate. When he looked up at her with his dark eyes, for a moment she saw him as the small child he'd once been, before his social ungainliness had been fully exposed, before his inability to play any sport had hindered him irredeemably, before his nose became adult and angular and his eyebrows one dark line, back when  he had seemed a shy and notably obedient little boy. A picky eater, always." (The Burgess Boys, p. 33) 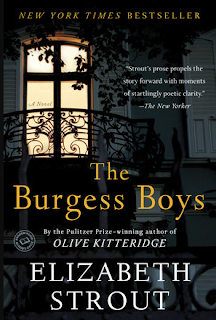 Elizabeth Strout's novel The Burgess Boys tells a story of three middle-aged siblings in crisis: Susan, her twin brother Bob, and their older brother Jim. Susan's son Zach is in trouble with the law and as the three siblings attempt to protect Zach, they reconnect. Individually and separately they relive their past lives, their various marriages both failed and successful, and their memories of their own mother, Barbara. Susan and Zach always seem to eat ready-made food, frozen pizza and the like, and it never seems to comfort them!

Bob, Jim, Bob's ex-wife Pam, and Jim's wife Helen all live a fairly glamorous life in New York, having escaped from small-town Maine where Susan and Zach still live. Several scenes take place at dinner parties and tony restaurants -- but the past is important. In a flashback to the relationship of Bob and Pam, Bob describes his childhood with Jim:

Before Bob and Pam were married, she was close with the family, including Susan and Barbara.  Their life at that time is characterized, again, by food:


"While the Burgesses seemed to have no knowledge of, or interest in food (there were meals of scrambled hamburger covered with an unmelted sheet of orange cheese, or a tuna casserole made with canned soup, or a chicken roasted without any spices, not even salt), Pam discovered that they loved baked goods, and so she made banana bread and sugar cookies...." (p. 107)

Sad people, but it's a good book about sad people. Elizabeth Strout's earlier book Olive Kitteridge introduced me to her great talent for presenting characters. To wrap up this very brief review: I think this quote summarizes a great deal about the book: "No one wants to believe something is too late, but it is always becoming too late, and then it is." (p. 254)

"No More Maybe"
Unrelated except by very contrasting comfort food is a newly published story, "No More Maybe," by Gish Jen. It just appeared in the New Yorker this week.

The narrator of "No More Maybe" is a young woman who recently immigrated to the US from China with her husband, an academic. She describes how his parents are visiting her to help with a baby that she's expecting in two months. Her narrative succinctly and effectively portrays the four characters: husband, mother-in-law, father-in-law, and narrator. They argue, they eat meals, they talk of many things comparing life in the US and China, and their relationships are very interesting. A final interchange with an American neighbor also shows Gish Jen's penetrating ability to observe people.

The mother-in-law's comfort food -- designed to be perfect for a pregnant woman -- especially portrays the contrasts between the western-educated people and their more folkloric Chinese background:


"Actually, I help a lot when she cooks for me. Especially, I help with the shopping and the chopping. But she does the planning and the cooking, because my baby will be born in two months now, and she wants me to eat all kinds of special food. On the outside, my mother-in-law is a modern sportswoman. But inside she is a traditional type. So I take American prenatal vitamins and calcium and DHA, of course. But also she feeds me steamed egg porridge with rice, and millet porridge. I have a glass of milk, red dates, fruit, and nuts every day. Tofu and bean sprouts every other day. And a lot of soups: pork-rib soup with lotus seeds or Chinese yam. Hen soup with mushrooms and more red dates. Soybean-and-pork-trotter soup. Even swallow’s-nest soup, which is very expensive. Because I am in my seventh month and my body has heated up, and because my mother-in-law has an app that says it’s O.K., I am allowed to have some cooling foods I could not have before. For example, some of her blueberries with a little ice cream. In China, there are pregnant women who eat a lot of blueberries. They think it will make their baby’s eyes shiny and round. But my mother-in-law says that is illogical thinking. She will let me have only a few."

Gish Jen is a very wonderful author, and I have been looking forward to reading this story -- I follow her on Facebook and she talked about editing it! One quote from this story also seems designed to summarize its theme: "No more maybe, in other words. Because that is just what happens. One day it is maybe, and then you just know."
Posted by Mae Travels at 10:39 AM

I love books like this that involve frequent mentions of food.

It is very interesting how so many writers put food memories in their books. It is, after all, something that we can all relate to in one way or the other.

Thanks Mae for visiting my blog. and leaving a comment. PS I use to live just outside of Ann Arbor.

I loved Olive Kitteridge, so I've read several of Strout's other works, but none has been quite so affecting to me. I liked The Burgess Boys but didn't love it, maybe because the sadness kind of brought me down. That's an interesting thought paralleling Zach and Susan's diet with the state of their lives. As someone who needs good food and doesn't like fast food, I can definitely attest to a parallel between what I am eating on a regular basis and the state of my emotional health.

Food is almost a universal language, isn't it? Not the same food, of course -- every culture has different tastes and customs -- but the love and savor of food is universal. So appropriate in literature! Good reviews -- thanks.