"The Lunar Men" by Jenny Uglow

"The circle met often. ... Their meetings were as much for pleasure as business. As the years rolled on, they tried to dine at two o'clock, and usually planned to stay until at leas eight. The wine flowed (despite Darwin's later advocacy of temperance) and the tables were heavy with fish and capons, Cheddar and Stilton, pies and syllabubs. At dinner the wives sometimes joined the men and the children dashed in and out. But wen the meal was cleared away, out came the instruments, the plans and the models, the minerals and machines. ... They were sharing an exuberant spread of knowledge.... The Lunar men were joined in a shared hunt for illumination, a quest that would bind them ever more closely together as the decades passed." (pp. 124-125)


Jenny Uglow's book The Lunar Men, about a group of scientists and industrialists during the eighteenth century, fascinated me when I first read it. I've thought and spoken about it many times in the decade since then. As I was reading again, I noticed that the above paragraph particularly illustrates how the author combines descriptions of the domestic lives -- including wives and many children -- of the famous group members. My memory of this as a very amazing book was confirmed by my rereading.

I wrote a very detailed review of it on my other blog at the time, and I've decided to reproduce it now. 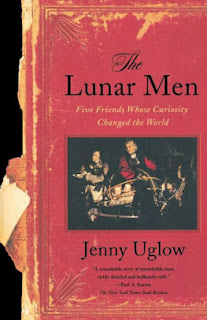 I just read The Lunar Men: Five Friends Whose Curiosity Changed the World, by Jenny Uglow. The subject is a group of remarkable 18th century colleagues, whose accomplishments contributed to scientific, social and technological change in their time. Seeing history from this perspective contrasts to the many literary-focused books I've read: though it mentions Blake and Coleridge it's just not about that side of the century!

In its 500 pages, the book covers a great deal of the political, commercial, and scientific history of England in that century, making it both fascinating and challenging. The Lunar Men were ahead of their time with creating new inventions and processes, they contributed to emerging explanations of natural phenomena like electricity, and they were in on the era's important discoveries about plants, human biology, and geology. They met Benjamin Franklin and the French chemist Lavoisier; they read works by Linnaeus and other scientists outside their circle.

Among the dozen or so members of the Lunar Society -- which met on evenings with a full moon so that they could safely walk home in less-than-total darkness -- I found the following men especially interesting: Theirs was the era of the Industrial Revolution, the American Revolution, and the French Revolution. They were engaged by all three. Although there were many differences of opinion among the Lunar Men, a prevalent reaction on their part was sympathy for the working man and for the new ideas about liberty, freedom of speech, and human rights. Most agreed with many ideas of reform and especially opposed slavery, though were uneasy with violent revolution.

Ironically, the conservative English reaction, which they didn't like, actually favored their business interests. For example, though anti-slavery, Boulton and Watt sold industrial equipment to slave-owning colonies like Trinidad. About the years after the French Revolution, Uglow says: "... as the war with France dragged on, the Lunar men still looked forward. And while the poor and the landed classes suffered, the industrialists did well out of the war, the Lunar men among them. Armies had to be fed, clothed and armed. ... Furnaces and forges poured out steel and iron, and coal production soared.... Just over the horizon lay the era of smoking factory chimneys and sweated labour -- the age of the machine." (p. 465)

Even more ironically, the common men in England opposed revolution and favored the old monarchy and fundamentalist religion. The masses hated the Lunar Men, who were well known for their various accomplishments and controversial ideas. They blamed them for being "philosophers" and for their suspected sympathy with the French revolution. On one sad occasion, a mob burned Priestly's house and destroyed his library and laboratory.

Their commitment to science and rational thought characterized much of their lives. Darwin wrote that philosophy -- equal to experimental science -- had always endeavored to oppose ignorance and credulity, which had "misled and enslaved mankind." He continued "philosophers have on this account been called unbelievers: unbelievers of what? of the fictions of fancy, of witchcraft, hobgoblins, apparitions, vampires, fairies; of the influence of the stars on human actions, miracles wrought by the bones of saints, the flight of ominous birds, the predictions from the bones of dying animals ... ." (p. 482)

Darwin, two generations before his grandson, already proposed that the layers of stone and fossils he observed were millions of years old -- opposing belief in the Biblical creation story and its 6000 year age for the earth. He was one of the first to describe geological strata including prehistoric bones, and suggested an early version of evolutionary theory. Among the many fascinating themes of Uglow's book, I find great appeal in how similar are some of the issues these men fought to issues still not resolved in our own society. We should know better by now, after 200 years!
Posted by Mae Travels at 7:08 AM