A story of Modern French Chocolate and its Inventors 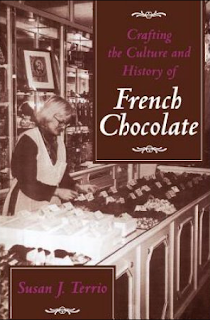 "Chocolate taste ... beginning in the 1980s took its substance from the nouvelle cuisine then dominant in the French culinary establishment. ... The new chocolate cuisine mandated fresh natural ingredients, novel but simplified flavorings, and healthy, dark chocolates with less sugar.  ... Connoisseurs now insist that choice French candies be made from fresh regional products such as chocolate from the best cacao growths, butter from Charente, cream from Normandy...; that they incorporate exotic flavorings and foodstuffs of distant locales such as citrus fruits, coffee, tea, spices, and even chocolate itself." (Terrio, pp. 57-58)


Crafting the Culture and History of French Chocolate by Susan J. Terrio is a scholarly study of artisan chocolate makers in France in the 1990s. Under the leadership of Robert Linxe (1929-2014), new flavors of artisanal chocolate had been popularized in France in competition with growing industrial production. In particular, French taste in chocolate evolved to prefer dark chocolate rather than milk chocolate, and to favor more exotic spices and fillings. In 1977, Linxe founded the Paris chocolate shop La Maison du Chocolate, which subsequently opened boutiques in Paris, New York, London, and other world capitals, and was thus the most successful of the French artisan chocolate houses.

The people in Terrio's study were owners of small but successful chocolate-making shops in towns on the Basque coast of France. These craftsmen/owners were aware of Linxe and his success -- in fact, his native town was in their region. However, they also had their own particular challenges dealing with local customers and with the large number of tourist customers who spent summers there. In each shop, the craftsman/owner hand-formed chocolate candies in a workshop adjacent to the sales area, where the wives managed presentation of the products and interacted with customers. It was impossible for an independent chocolate shop to succeed if both husband and wife were not dedicated to their expected roles.

The author systematically describes the details of these shop owners' history and education, their social position, their family life,  and the succession of ownership and craftsmanship from one generation to the next. For any reader interested in French society and its class structure, educational institutions, and priorities, this book offers fascinating insights.

Collective efforts at development of craft and professional standards were a major goal of some of the chocolate craftsmen, particularly their efforts to create guild-like organizations. The author describes the interaction between the craftsmen and government regulators, as well as a few memories of the way that chocolate makers dealt with the hardships of World War II. The history of chocolate in the region dates back to the introduction of chocolate to France several hundred years earlier by Jews fleeing from Spain; some time later, guilds (in which membership was open only to Christians) forced the Jews out of the trade. Terrio shows how this part of history has been revised interestingly to match contemporary needs for a useful origin myth. (pp. 72-79)

One of the most interesting elements of the history is how these chocolate makers have very recently redefined their craft. In particular, French choices in chocolate types developed quite a bit in the last quarter of the twentieth century -- the era of concentration of this book. The development of these tastes helped artisan chocolate makers compete with growing pressure from mass-produced chocolates that looked the same but were not made with the same craftsmanship. I was especially fascinated by the way that taste tests often disclosed that many people really preferred sweeter milk chocolate, but that the taste makers essentially imposed the theoretically more refined taste for dark chocolate and exotic flavors.

Although Crafting the Culture and History of French Chocolate is written in a very academic style, with much social science jargon, I nevertheless found it readable and often remarkably interesting. I am very curious about the subsequent history of artisanal chocolate in France since the book was published in 2000. The author appears to have moved on to study other aspects of French culture, and not to have followed up with the subjects of her book. 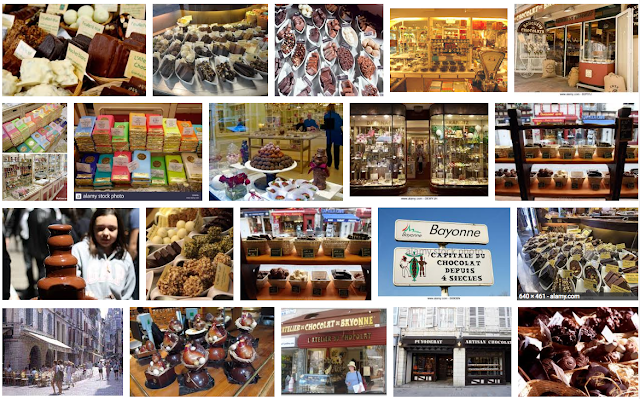 In my own travels, I tend to concentrate on pastry shops more than on candy shops, though I have very fond memories of at least one chocolate shop in Lyons and one in Paris. The screen shot from a google search for "Bayonne France Chocolatiers" suggests that chocolate makers there still offer some very tempting candy.
Posted by Mae Travels at 4:48 PM

I wondered how chocolate tastes evolved in France. Thank you for sharing this with us.

Sounds like the perfect read for World Chocolate Day that just passed!

That is interesting. I'm a big fan of chocolate and have found, in my few overseas travels, the chocolate tastes more pure. Not filled with the preservatives here. Also, a dark chocolate is good for you (in moderation) and goes a treat with red wine :-)

How interesting. My favorite chocolate ever was bought in a family shop in Brugges.

I've noticed more and more people here in Hawaii are getting into growing, and processing cacao into chocolate. Lots of experimenting going on.

Chocolate is my weakness, so I love this post.

Note to self - avoid this book - may lead to choccie cravings. Have a great week. Cheers from Carole's Chatter

Thank you for this informative and interesting read about one of my favorite foods! We love it, but really didn't know much about its production..