After another morning of birding along a beautiful creek in a town called Gallisteo, we came back to Santa Fe and had lunch in a small Mexican deli called the Palacio Cafe. Len had a Cuban Reuben Panini -- made and served by Spanish-speaking cook and waitresses -- that is, 4-way fusion food.

We then proceeded to New Mexico Museum of Art and then to the Georgia O'Keeffe Museum.


The O'Keeffe Museum has a remarkable collection of paintings and other works that she produced throughout her life. It also presents many photos of her and her surroundings -- even photos and sketches of her in early childhood by her mother and sisters, who were also painters. 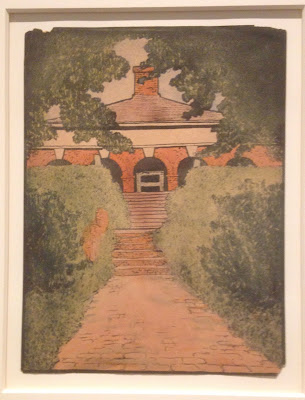 In her earliest years as an artist, O'Keeffe was influenced by a famous art-instruction book by Arthur Dow, and by Alon Bement, her teacher at University of Virginia where she studied. The work above depicts the UVA campus, in the style she was then learning.

Not long after her time at UVA, she began to develop her own style of abstraction. She lived in a number of places, including New York City, where she began to be recognized as an innovator and creative artist. Visiting the museum reviews the details of her personal and creative life, especially the many years she spent either part of the year or full time in New Mexico.

Good post! "Pedernal" is a beauty, and O'Keeffe an interesting artist, definitely had an artists' eye for mountains and esp flowers. I've always wanted to visit Santa Fe, for it's creative art and Pueblo architecture. Must be a great place with lots to do!