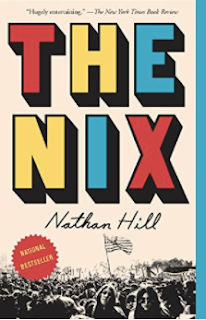 Reading The Nix by Nathan Hill often made me laugh out loud, which was awkward when I was reading the book and also sitting on my yoga mat while waiting for class to start. The more I try to capture the extraordinary humor of the book the less successful I am. However, here's a brief review of what I liked and the small area I didn't like as much.

The book covers several generations of one family, but not in chronological order at all. Besides the grandfather and parents of the central character Samuel, there's a penetrating though also funny description of his childhood friend Bishop, who defies authority and figures out how to stop the class bully, of Bishop's beautiful sister, and many others. Some reviewers have referred to this as a "Great American Novel," which fits when you consider that Hill covered so many quirks of American life through these four generations.

One of my favorite characters is Samuel's vengeful student Laura Pottsdam, a habitual cheater. Laura uses every buzzword in the college lexicon to avoid the consequences when Samuel catches her submitting a free-on-the-internet paper about Hamlet. Laura has hilarious encounters with her boyfriend and his strange demands on her (which I won't quote because I'm embarrassed), and also spends a lot of time on a social media app called iFeel. "The thing about iFeel was that she could broadcast how she felt at any given moment to her huge network of friends, and then their apps could auto-respond to her feelings with whatever message was appropriate... She could select an emotion from the fifty standard emotion choices and post a little explanatory note or photo or both, then watch the support roll in." However, she is challenged when she feels doubt. Nothing like it appears on the list. (p. 423)

The otherworldly life of compulsive computer gaming is critical to several of the characters, including Samuel himself, who is immersed in an online game called Elfworld, where he joins a number of anonymous players including the unemployed and divorced Pwnage, whose life is nothing but gaming and trying to stop. Pwnage wants to switch from a weirdly cheap diet to organic health food while he is literally starving himself nearly to death by never getting up from his screen. Pwnage:


"See, what's important for me is to be frugal. I'm saving up. Do you know how expensive that organic health food stuff is? A sandwich is seventy-nine cents at the gas station but like ten bucks at the farmer's market. Do you know how cheap, on a per-calorie basis, nachos are? Not to mention the Go-Go Taquitos or Pancake and Sausage To-Go Sticks or other food that have no organic equivalent that I get for free at the 7-Eleven down the street. ... Of course eating these food items is not what I might describe as pleasant, since they're tough and scorched and moistureless from their all-day cooking on high-temperature rollers. Sometimes biting through a burrito's thick tortilla casing can feel like chewing through your own toe calluses." (p. 224)

Samuel is forced by a chain of events to engage in a detailed quest to learn about the secret life of his mother, Faye, who abandoned him and his father when he was eleven years old in 1988. He discovers her frustrating life in high school in Iowa, and how she escaped for just one month to Chicago, where she was caught up in the violent protests during the 1968 Democratic Convention nominating Hubert Humphrey, a mostly-now-forgotten horror show which Hill brings back to life. Excessively, I thought. The last 200 pages of the book where the book turns from satire into a historical novel was the part I liked the least. On the other hand, I much enjoyed Faye's high school experiences including home-ec and her very proper teacher Mrs. Schwingle:


"Mrs. Schwingle teaches them how to host a dinner party, how to cook for a dinner party, how to make pleasing conversation with dinner guests, how to create the sophisticated dishes she insists the wives on the East Coast are right now making, mostly involving some kind of gelatin, some kind of lettuce trim, some kind of food-within-another-food conceit. Shrimp salad in an avocado ring mold. Pineapple in lime gelatin served with cream cheese. Cabbage suspended in jellied bouillon. Peaches split and filled with blueberries. Canned pear halves covered in shredded yellow cheese. Pineapple boats filled with cocktail sauce. Olive pimento mousse. Chicken salad molded into white warheads. Tuna squares. Lemon salmon towers. Ham-wrapped cantaloupe balls. ... America has fallen in love with these foods: modern, exciting, unnatural." (p. 288-289)

The Nix has a kind of a message, embodied in a Norwegian folk tale about a supernatural being called a Nix. The message is that we are destroyed by what we love the most, or "Don't trust things that are too good to be true." Or the last sentence of the book: "Eventually, all debts must be repaid." Fortunately, the message is carried by a series of wonderful and mostly very funny tales of life in America, the good and the bad, the political horrors and the merely commercial. (p. 115 and 732)
Posted by Mae Travels at 10:38 AM

I've been wanting to read this book for a while, so I skipped reading the last sentence, but I did like the quotes you shared.

I do love a book with lots of humor, and this one will get checked out for sure, though, maybe like you I'll skip over the last bits.

I have this one on my shelf - I need to make time to read it!! Thanks for your wonderful review.

I love "laugh out loud." I was searching for a b-day gift for my sister and this might be it. (Of course, I will read it before I gift it to her.)

Another laugh-out-loud author is Matthew Norman. (And of course, Sedaris.)

I'm in the mood to laugh out loud- sounds like a good book..