How many kinds of tacos are there? I'd heard of tacos al pastor and fish tacos, but I learned about a lot of other tacos in the all-encompassing and sprawling presentations of the Tacopedia. Authors/creators  Deborah Holtz and Juan Carlos Mena have a fantastic sense of humor. Sixteen categories of tacos -- including insect tacos -- appear in the main section.

Where do taco ingredients and methods come from? Corn, tomatoes, and chili were all in Mexico before 1492, but beef, pork, and metal grills and griddles used for cooking are all European, originally:


"Pork carnitas is one of the most famous dishes in Mexican cuisine. .... Without a doubt, the flexible tortilla and the tender pork come together to provide an unparalleled culinary performance: that corn dough with which the gods created the first man in the Americas meets the pig, an animal that in New Spain in the sixteenth century was eaten as proof of adherence to the Catholic faith." (p.143)

The role of technology in tacos? Taco-making depends on a variety of inventions. For example, "basket tacos" are carried from taco kitchen to customers in bicycle baskets; during the ride, the tacos finish cooking by being steamed while they are all packed together. And tacos al pastor were originally (and sometimes still) made on a gyros vertical grill introduced to Mexico by Middle-Eastern immigrants around a century ago. Overall, the authors' casual way of looking at food history is delightful.

How do Mexican idioms incorporate food metaphors? Check out the amusing image above left. Even though I don't know Spanish, I found these little illustrations very entertaining.

Where can you get the best of every kind of tacos? And how would you make them yourself? In this encyclopedic book, each description of a type of taco is accompanied by a page of recommended taco stalls, food trucks or restaurants in Mexico, as well as by a variety of recipes. The more obscure ingredients and spices are also explained and pictured. 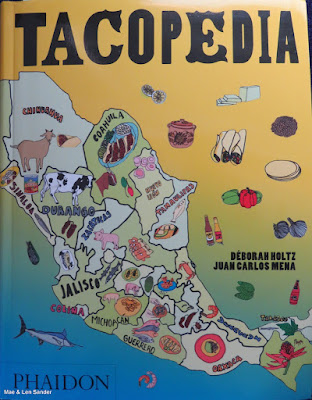 Tacopedia is a colorful and very playful book, illustrated with original drawings, photos, and reproductions of many classic images ranging from Aztec codex drawings to works by Diego Rivera and other Mexican artists. The layout is either chaotic or creative, depending on how you look at it. It's printed on a rough-textured paper, as if it's a phone book or some such informal document. Also, it's full of statistics about consumption and production of food in Mexico. And funny little facts like this: "In the Second World War, the pilots of the Mexican 201st squadron wrote on the side of a missile: 'Take this Taquito, Hirohito.'" (p. 168)

The authors feel that tacos are a key to their culture, and they show enormous respect for the makers and innovators of this food. As the introduction puts it: "there must be something deeply rooted in our culture that makes tacos this culinary wonder loved by the whole world... unlike any other dish, tacos are one of the most definitive traits of Mexican culture." (p. 9)

I've read a few books on tacos and their close culinary relatives by North American writers. Tacopedia is a welcome addition to my library and to my knowledge. More books --

Who can resist a good taco Mae. Surely not me:) Looks like I may not be able to say no to this book either, I don't think I have one Taco book on my shelf. I'll have to change that and soon because National Taco Day is in October!!!

Who knew there was a book all about tacos? Not a cookbook, I mean, but more a historical/sociological examination? Really interesting post -- thanks.

I love tacos beef,fish,chicken, you name it I love them. Great post about the history of this delicious food. Thanks for sharing:)

I so must try and make tacos :)

sounds like a great book - have you seen the one on the taco clense which is quite tongue in cheek! Now I feel like a taco

Johanna -- I haven't seen the book on the taco cleanse; it sounds really funny! ... mae

Well, having had Mexican food (out) last night, this post is very timely! I'm not a huge Mexican food cook -- but I love it! This book just sounds like a lot of fun!