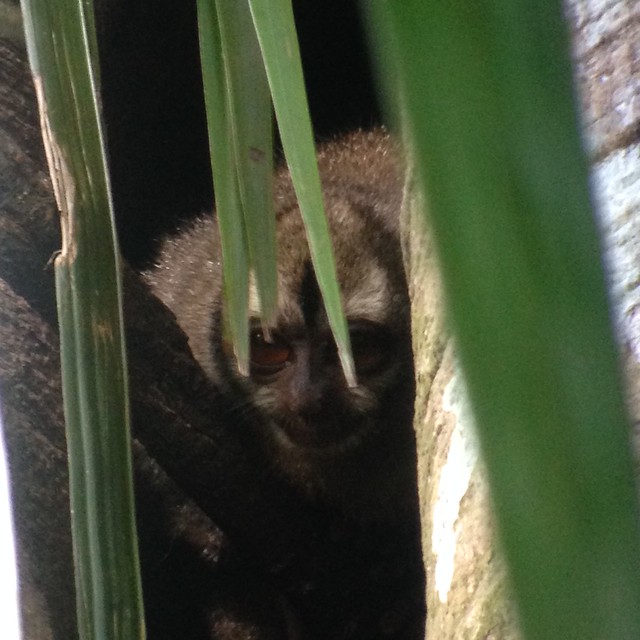 Above is a night monkey, which we saw peering out of its hole in a tree late this afternoon. I wasn't even aware of this species until this week's guided tour of the wildlife in Panama. When I saw it on the list of animals we might find, I really hoped to see it. And today, our last day here, we saw both the night monkey and the Capuchin monkey (below). We also had a remarkable view of an anteater, which was scratching itself all over with its long arms. Though we watched the anteater for quite a while, we didn't get a photo. We also saw a few more sloths. 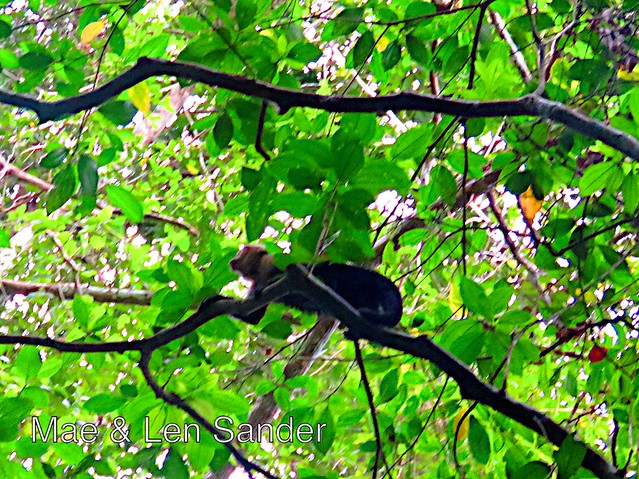 I haven't written much about the food we've been eating during our stay in Panama. We have been staying at the Canopy Tower, where all meals are included, and where the meal times are coordinated with the guided birdwatching and wildlife tours.

I haven't been hungry at breakfast which we've been eating at 5:15 or 5:30 AM in order to be ready for early morning wildlife observation. I was disappointed in the orange juice, which is reconstituted from some sort of chemical-tasting powder. The bread for toast was mass-produced white or raisin bread. Thus, I've mainly eaten fruit for breakfast. My fellow birdwatchers seemed pretty happy about the bacon, eggs, pancakes, cereal, yogurt and other offerings.

Lunches and dinners fortunately always included salads, which usually had lettuce and some fruit or vegetables. Examples: dates with avocado; bananas with white cheese; pico de gallo (chopped tomatoes, peppers, onion); once a classic caesar salad, and others. The dressing was always the same: oil, vinegar, and chopped onion.

A meat course, rice, and one or two vegetable sides served buffet-style in covered metal chafing dishes were on almost every buffet for lunch and dinner.  No choices. If beef was served, you ate beef unless you had specified in advance that you didn't eat red meat. If chicken was served, as it very often was, you ate chicken. For non-meat eaters there was almost always some sort of fish, and we were always warned not to take the fish if we had not pre-ordered it. Some of the dishes were very nicely spiced; others were somewhat bland, but small dishes of hot sauce were always on the table. No other condiments except bbq sauce at the one outdoor barbecue dinner. My favorite was a beef stew made with prunes and olives. A rice casserole with what I suppose was leftover meat was also tasty.

In sum, the food ranged from ok to rather nice, but wasn't exciting, and no one was here for the food, we were all here for the wildlife.
Posted by Mae Travels at 9:58 PM

Great photos! Thanks for sharing them and your descriptions of the food served.

With all that nature exploring and photo ops, who has time for great meals? Too bad the food part wasn't more exciting, but it sounds like a huge success in terms of spotting wildlife.

The surroundings, I am sure, make up for the lack of culinary delights! I am envious of this trip, Mae!

Sounds like a good adventure despite the food disappointments. Thanks for sharing!

Very fun and great pictures--love that little monkey peeking out. ;-)

Panama - how exotic. When I was a kid I went through the Panama Canal but don't really remember it well. Cheers from Carole's Chatter!

Glad you got to experience this beautiful nature! Did you go with an organized group or on your own to Canopy Tower?

What a fascinating adventure you must be having. I'm enjoying both pictures and food info.

I just read Two Serious Ladies by Jane Bowles (from the 1940s) and one of the main characters travels to Panama with her husband - a life-changing trip for both of them! I always like to hear about the food on people's travels, but you're right, it's not the most important part of your exciting trip! -- Laurie C

My husband has always wanted to visit Panama. The lunch salads sound good.