"The Rise and Fall of American Growth" 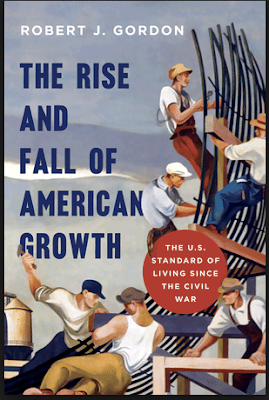 Technology has changed everyday life and work life for almost everyone in the United States, and in fact for most people in the rest of the world. This is a truism, but there are lots of questions about how, when, and why it happened. In The Rise and Fall of American Growth: The U.S. Standard of Living since the Civil War, economist Robert Gordon combines descriptions of American life in the 19th, 20th, and 21st centuries with quantitative economic data defining exactly what changed and how much. It's a long book, with lots of technicalities, but nevertheless I found it amazingly readable and once I set myself the task, I read it pretty carefully.

I found the descriptions of the way the American diet and foodways reflected the changes in technology very fascinating. I loved the descriptions of the impact of telephones, radio broadcasting, and electric lighting. And I was really interested in the overall discussion of household appliances -- but since I've read quite a bit about this part of history, I found the descriptions of changes in health to be more of a revelation. Specifically: "the annual rate of improvement in life expectancy was twice as fast in the first half of the twentieth century as in the last half." And "By one estimate, life expectancy at birth in 1900 was 46.0 years for white rural males and 39.1 years for white urban males, with the rural/ urban differential about half that for white females." (Kindle Locations 4103-4104).

Clean water and sanitation were obviously at the top of the list of contributors to this increase in health and longevity. In 1870, when Gordon shows that technological changes were getting started, virtually no running water or sewer lines were available in American homes. This meant people seldom bathed (they had to carry in water and fuel to heat it and then carry it out of the house for disposal) and general cleanliness was problematic. Drinking water was often badly polluted by sewage or industrial waste. Clean water and sewage treatment plants made an enormous impact on overall health during the first half of the 20th century. A small effect of water-treatment plants more recently is the high effectiveness of fluoridation on tooth decay, a significant health issue: "fluoridation was shown to reduce tooth decay by 56 percent." (Kindle Locations 9445-9446).

Food was often contaminated or adulterated, as there was not yet effective refrigeration or food safety regulation. "Avarice and greed by food manufacturers combined with new chemical processes that could accomplish the adulteration and disguise the results with coloring agents. Consumers were helpless, for most food items were subject to adulteration." (Kindle Locations 4357-4359).

"The historic decline in infant mortality centered in the six-decade period of 1890– 1950 is one of the most important single facts in the history of American economic growth." Clean water and unadulterated milk, as well as successes against infectious diseases were major contributors to this important improvement in public health. (Kindle Locations 4148-4149).

The automobile made an impact on health that I wouldn't have thought of: the earliest adopters in large numbers were physicians, who could then reach their patients quickly. Another health contribution of the automobile was to free streets from the horrendous quantities of waste from the horses that previously provided transportation -- air pollution from autos was minor compared to horse manure! Further: the telephone, which went from almost nonexistent to almost total penetration by 1929, enabled people to make appointments with doctors and above all to call for them in an emergency, rather than having to send a messenger to track down the doctor's whereabouts.

One surprise is the very high impact of air conditioning on health: "A study of the temperature-mortality relationship emerged with two primary findings. First, the mortality impact of days with a mean temperature exceeding 80° F has declined since 1960 by almost 70 percent. Second, this entire decline in heat-related fatalities can be attributed to the diffusion of residential air conditioning." (Kindle Locations 9409-9411).

The Rise and Fall of American Growth is a fascinating study of economic history, written appropriately for the common reader, though I'm sure it's also of great interest to the experts. It combines the expected with the unexpected in a most fascinating way --

Hewers of wood? Drawers of water? Women's work never done? Gordon both describes and quantifies the labor of housewives before technology reduced the heavy labor involved in keeping a household provided with cooked food, heat in winter, warm bath water, and sanitation:


"According to one calculation made in 1886, 'a typical North Carolina housewife had to carry water 8 to 10 times each day. Washing, boiling, and rinsing a single load of laundry used about 50 gallons of water. Over the course of a year she walked 148 miles toting water and carried more than thirty-six tons of water.' Not only was the water carried in, but dirty water had to be carried out, not to mention the unpleasant task of emptying chamberpots.

"But that was not all the carrying that needed to be done. In 1870, the gas or electric stove had not been invented, so all cooking involved wood or coal. Fresh wood and/or coal had to be carried into the house— and spent ashes carried out. 'Paper and kindling had to be set inside the stove, dampers and flues had to be carefully adjusted, and a fire lit. Since there were no thermostats to regulate the stove’s temperature, a woman had to keep an eye on the contraption all day long…. Keeping a fire burning all day required 50 pounds each day of coal or wood.'” (Kindle Locations 1195-1203).

For a much more expert and comprehensive review, see "Paul Krugman Reviews ‘The Rise and Fall of American Growth’ by Robert J. Gordon" in the New York Times Book Review, January 25, 2016.
Posted by Mae Travels at 11:40 AM

Great article and Great walk-through.!1
I'm glad that i visited your blog page.
Thanks for sharing.!