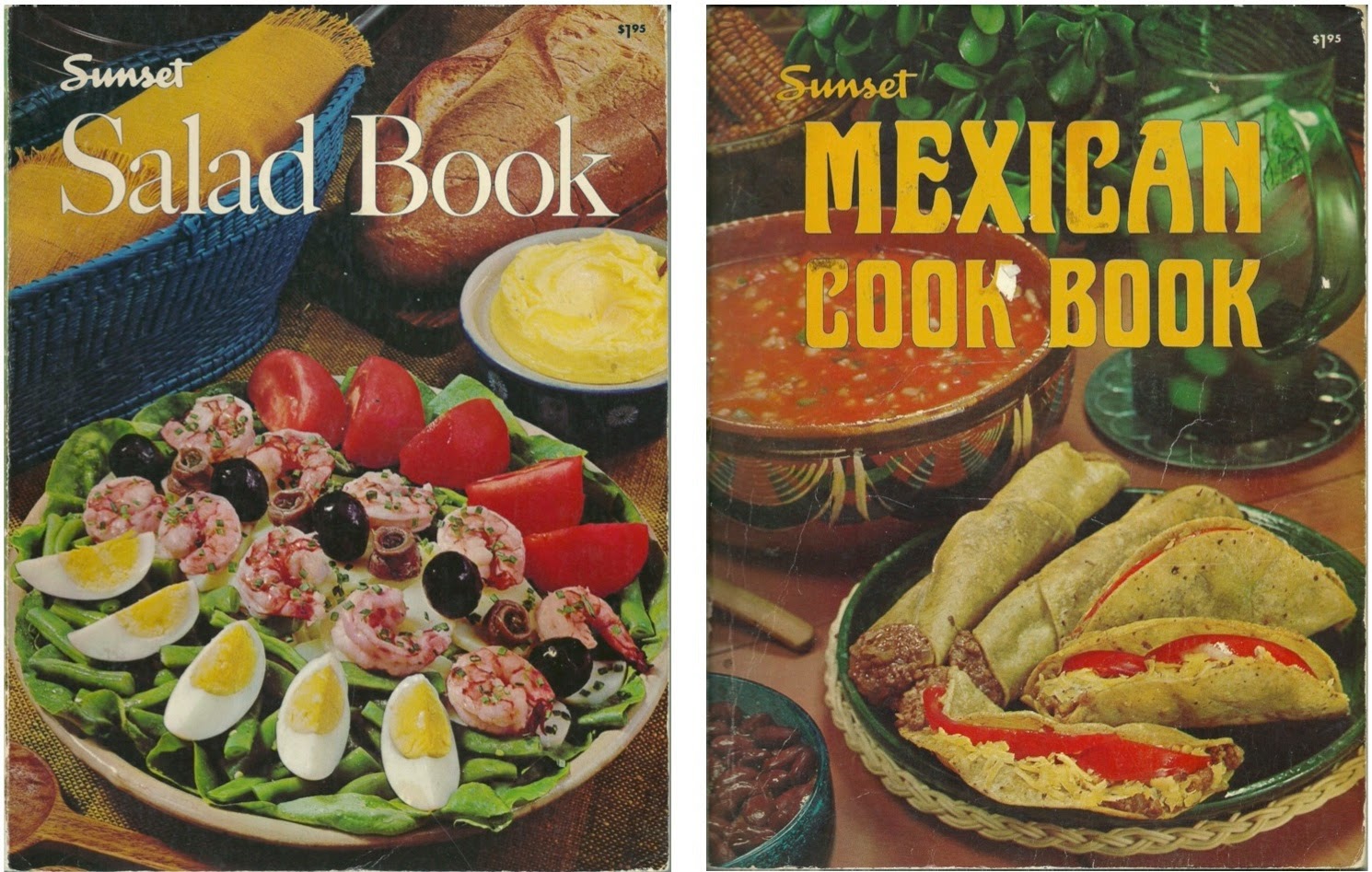 I know some food snobs don't take Sunset cookbooks seriously. I'm not a food snob, and over time, I have learned a lot from Sunset! Above are two books that I found very useful when I bought them in the 1970s. My favorite recipes from the Mexican cookbook were Picadillo Turnovers and Bread Pudding:

I don't know if I ever made Green Goddess Salad from the salad book, though I made quite a few others. I'm including it because it seems very vintage.

Sunset magazine published its first cookbook in 1933. The magazine, always focused on the West, had already existed for decades by then. From the beginning and up to the present, it included not only food, but also travel, do-it-yourself projects (most famously, a back-yard adobe oven), and Western architecture articles. I grew to love reading it while living in California at various times. My introduction to Mexican and Asian flavors and foodways was through ethnic restaurants in California, and my introduction to cooking them was Sunset, both the cookbooks and the magazine.

When a new Sunset cookbook with 1000 recipes was published in 2010 the New York Times reviewer wrote:


"Before Alice Waters picked her first Little Gem lettuce and Wolfgang Puck draped smoked salmon across a pizza, California cuisine meant something else. The other California cuisine was being served on a million patios in the Golden State by relaxed cooks who grilled thick cuts of beef called tri-tip and built salads from avocado and oranges. They used red chili sauce like roux, ate abalone and oysters, and whipped sticky dates into milkshakes. It was the food of the gold rush and of immigrants, of orchards and sunshine. ...

"There to chronicle it — and help create it — was Sunset magazine, the stalwart regional publication that Southern Pacific Railroad executives began in 1898 to lure Easterners to the untamed West." (Source: "The Original California Cuisine, Courtesy of Sunset Magazine" by Kim Severson)

I have quite a few Sunset books in my collection and they have never let me down yet!!!

I'm so glad you included a bit of a back story on this post. I've always wanted to do a post about Sunset Magazine's beginnings. It's really quite fascinating actually.

Thank you so much for sharing these books, Mae. I hope you will be adding them to the new linky tool I included on today's post:)

I'll be pinning for sure:)

Hi again Mae, I added it for you!!! Feel free to change it if you like:) I just wanted to make sure it was working properly:)

I like cookbooks like these. They seem written for real people who actually cook while going about the business of living, instead of people who can dedicate hours to a meal. My mother just adored Green Goddess dressing (made by Seven Seas) back in the 1970s, and I think that Green Goddess Salad looks just splendid! Nice to see you through Louise's linkup! Have a great week, Mae.

What a fun blog post! I well remember the Sunset cookbooks. Looking at this blog post was like taking a journey back in time. Those Mexican recipes look really tasty. While these books have fallen by the wayside in favor of those by celebrity chefs, a lot of good recipes can still be found here.

Hi Mae, thanks for stopping by to comment; love these Sunset cookbooks, I used to have a few of them myself and now I regret for getting rid of them because they were quite reliable and the recipes were 'tried and true' (most of them)
Thanks for sharing some of the vintage recipes; love the Green Goddess salad and dressing, that is a true CLASSIC!
Happy Thanksgiving! xo

Mae, not sure if comment went through or not, but I did sent it!
Thanks for stopping by my blog, and loved sharing Cookbook Wednesday, as well!
Love your Sunset Cookbooks, and the recipes you posted!

I have the bread cookbook. It is one of my favorites:)

Oooh, the Mexican cookbook is for me. I adore Mexican.

I remember my mother having the Sunset books -- or at least some of them. They are of an era and I think their recipes work.