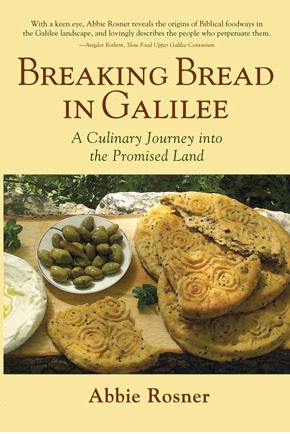 Breaking Bread in Galilee: A Culinary Journey into the Promised Land by Abbie Rosner is a fascinating study of agriculture and gathering wild foods. Rosner is an American who moved to Israel over 25 years ago and decided to study the small remaining Arab and Bedouin population who maintain some traditional foodways. Any book about Israeli Arabs by a Jewish-Israeli-American is fraught. The author made what I consider to be a wise choice: she acknowledged, but did not explore, the political and historic issues about Israel and the Palestinian people. She sticks to her topic: food.

"I have chosen to approach food as a means of bringing people together instead of keeping them apart," she wrote in her introduction. "If using food as a bridge between individuals from either side of the conflict can help overcome suspicion and promote mutual understanding, even on the most modest scale, then something very significant can be achieved."

The Galilee, where Rosner lives with her husband and family, is a rich agricultural region. It also includes uncultivated lands that produce wild vegetables and herbs. Rosner found people with deep roots on the land who continue to forage for wild plants and to raise traditional crops. She introduced many quotations from the Bible, relating both the foods and the practices to ancient ways. I have no idea if her comparisons reflect modern scholarship on the issue, but they are highly enjoyable to think about.

For each type of plant or food, Rosner had a story. She met and befriended a variety of people, some in villages or on farms, some who have moved to bigger cities such as Nazareth. Many of them invited her to accompany them on foraging trips, or to share coffee and sweets or entire meals made from their own produce or their gatherings. Each story is very engaging.

Many of the wild plants Rosner described are unfamiliar to Americans, so her introductions and explanations of the tastes and uses of the foods are very interesting. The word zaatar may be familiar as a spice blend. I have some on my spice shelf, and I love to sprinkle it on yogurt or on pita bread with olive oil: the traditional ways, as Rosner points out. Zaatar is also a plant in itself, and can be gathered in the Galilee, she explained.

While I had heard of freekeh, green wheat that is roasted or "parched;" and I've eaten the various forms of white cheese like jibni, leben, and labaneh, other plants she mentioned are completely unfamiliar. I liked her descriptions of hubeisa (mallow), jarjir ha nahal (wild cress), elsaina, selek (wild spinach), wild asparagus, and malukhiya (jute). She described the cultivation and preparation of olives, okra, eggplant, grape leaves, grains, and other old-world foods, as well as mentioning some new-world foods, like potatoes and tomatoes, that now play a role in the local cuisine. Rosner included recipes for some of the foods she mentioned; I have not tried them, and I'm not at all sure that I can obtain the necessary ingredients in an authentic or fresh form.

The unusual nature of Rosner's endeavor is powerful. Again from the introduction to the book: "In Israel today, Jewish and Arab societies exist with very little interaction between them." Israelis seldom exchange visits with Arab people, only eating Arab food in "formulaic" restaurants. "Traditional Arab home cooking is not found in restaurants," she says. "The kitchens of Arab restaurants are run by men, just as the kitchens at  home are the domain of women." One of her accomplishments in the book is bonding with Balkees, a woman whose baked goods are so popular that she is able to sell them to many people in her community in Nazareth. At the end of the book, Rosner and Balkees agree that each has begun to see the world through the other's eyes, and has changed as a result of their friendship. (p. 235)

For an interesting description of a tour of Nazareth that Rosner leads, with photos of some of the foods from the book, see this blog post: Bridging cultures through food in Nazareth. For an article by Rosner, see Roasting Green Wheat in Galilee.

Labels: Israel, Posted in 2014, What did historic figures eat