Along with Caribbean memories of spectacular coral and colorful reef fish, I also have memories of interesting foods I once ate there. These memories include delicious fish dishes, unfamiliar tropical fruits, exotic spice combinations, and interesting breakfast breads. Although our hotels often served primarily standard hotel fare, we looked for local specialties when we could.

A savory cornmeal pudding called funchi served with fried plantains was a delicacy in a beach restaurant where we ate in Puerto Rico. We ordered stewed iguana and local fish at a restaurant at the far end of Curaçao. Keshi Yena, a Gouda cheese stuffed with picadillo-type meat filling is special to Bonaire and Curaçao, reflecting the islands' Dutch, Portuguese, and African roots. At a food stall in Bonaire, we once had a barbecued goat sandwich.  In Saint Lucia we tried local freshwater crayfish. On another visit there, we enjoyed roti, an East-Indian-influenced dish, and we also visited a farmers' market at Christmas. I think we have tasted breadfruit, but it's rarely on tourist menus. We've also eaten conch chowder occasionally.

Over time, as I've learned about one island after another, I've acquired a few Caribbean cookbooks, which I'll tell you about now for Cookbook Wednesday. "What's Cooking in St. Lucia," a pamphlet lacking any title page information, says "The St. Lucians can dazzle you with baked lobster, stuffed breadfruit, and mangoes with ice cream. Delight you with banana bread or fried plantain. Surprise you with pumpkin soup and boiled cucumber." I've tried the pumpkin soup, and it's very nice. (I always try pumpkin soup recipes.) The Complete Book of Caribbean Cooking by Elisabeth Lambert Ortiz -- a professional cookbook writer -- is a compendium of recipes from many islands, including four recipes for Keshy Yena (the spelling varies) with chicken, meat, or fish. She describes the dish as "a baked Edam or Gouda cheese with a variety of fillings. It originates in Curaçao and the name... is in Papiamento, the patois of the Netherlands Antilles.... Curiously, enough, the dish has been adopted by Chiapas and Yucatan in Mexico where it was probably introduced some time in the nineteenth century by Dutch and German coffee men. It is called queso relleno there." (p. 388)

Ortiz's cream of pumpkin soup from Jamaica calls for Pickapeppa hot sauce, a condiment from Jamaica that I've grown quite fond of. She included five recipes for West-African-inspired Callalou -- from Guadeloupe, St. Lucia, Martinique, Haiti, and Trinidad. And many, many other recipes -- the book runs 400 pages! Recipes from the Jewish Kitchens of Curaçao was published by the historic Jewish congregation there. This Jewish community began in the 1650s, when the Dutch settlers included Jews who had come to Amsterdam fleeing the Portuguese Inquisition. The synagogue itself is often visited by tourists. The building has been in continuous use since 1732.

Curaçao's Jewish community has a complicated history. I'll just mention that the recipes in the book reflect both the Sephardic Jewish traditions and many other Jewish and non-Jewish Caribbean traditions, right down to a classic tuna-macaroni casserole no doubt reflecting the influence of North Americans who worship there (though the recipe does call for raisins and Tabasco sauce as well as canned tuna and the usual ingredients).

Two pages from the cookbook: 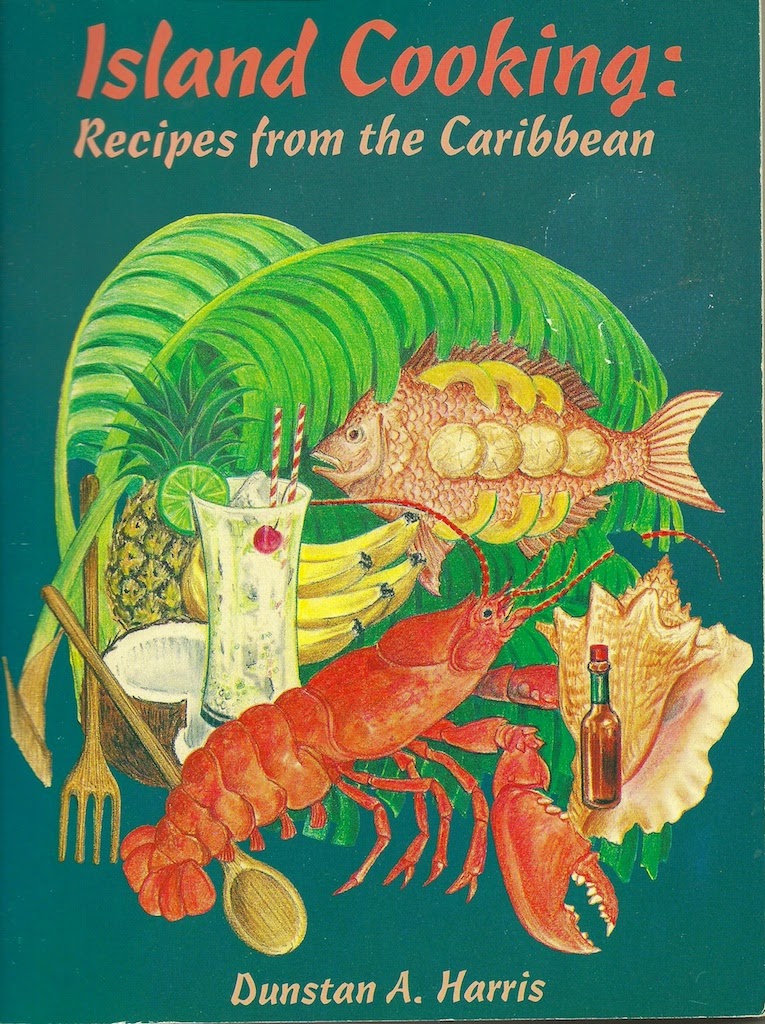 Island Cooking: Recipes from the Caribbean by Dunstan A. Harris unfortunately doesn't identify which island each recipe comes from. Though not as long as the Ortiz book, this book includes a wide selection of dishes with numerous ethnic origins, including roti (a type of curry), paella, pepperpot, breadfruit pudding, various ways to use salted codfish, and many more.

In Harris's introduction, he describes the history of the region and of several of the individual islands. I found it fascinating that pineapples are native to the region. "Columbus came across them in 1493 on the island of Guadeloupe" (p. 2). And that papayas, called paw-paws there, are also of Caribbean origin.

The three cookbooks (but not the St. Lucia pamphlet) are all still available from amazon sellers, if you are interested in them.

At the time that I was buying these books, I found it hard to locate books about Caribbean food history and recipes. In contrast, I've recently seen reviews of several new Caribbean cookbooks and food histories that would probably fill in the gaps in my knowledge. I don't know if I'll actually ever read them, but here's my wish list:


According to the amazon.com summary the book includes "foodways, Atlantic history, the slave trade, the importance of sugar, the place of food in African-derived religion, resistance, sexuality and the Caribbean kitchen, contemporary Caribbean identity, and the politics of the new globalization."

When I consider cooking tropical island recipes at home in Michigan, I'm challenged by the wide variety of perishable ingredients needed. Numerous ethnic groups who settled in the islands in their first few hundred years displaced or extinguished the local Indian populations, but continued to cultivate some of their produce. A huge variety of fruits, vegetables, spices, and domestic animals from northern Europe, Iberia, the Mediterranean, and Southeast Asia came in with the immigrants; above all, many foods and cooking methods came with enslaved people from Africa. While colonial masters may have tried to eat as if they were at home, local cooks fused a variety of tastes and ingredients into distinctive dishes.

Each island has developed its own distinctive style, depending on its political history, on the range of available products, and on local economic factors. Sugar cane plantations, established soon after Columbus first landed, exhausted once-fertile lands, wrecked the water table, and disrupted local flora and fauna. Spice plantations and tropical fruit groves also altered the landscape. The most brutal slavery in the New World supported the sugar industry, with many lasting tragic consequences.

By mid-19th century, the once-flourishing Caribbean region became a backwater. A few islands, like Haiti, were self-governed; others were governed by various indifferent European powers with no motive for redeveloping their economies. Quite a few of the islands suffered from centuries-long abandonment and near-starvation after the land became useless for producing export commodities. Some islands are still governed by European countries; many are now independent.

Today much food has to be imported from larger countries -- especially provisions for the hotels and tourist restaurants. However, on banana boats, local fishing boats, and other inter-island boats, as well as by plane, people still share foods among various islands.

Tourism, oil refineries, off-shore banking, and other 20th-century efforts to restore failed economies have met with varied success, little of it trickling down to the native residents. Poverty and food insufficiency are problems for the worst-off residents of benevolently-ruled Dutch Curaçao, for many citizens of independent Jamaica, for most of those living under the broken government of Haiti, for the residents of Communist Cuba, and for those on many other islands.

We have chosen Caribbean vacations in the past because diving and snorkeling on many of the islands used to be a fabulous adventure. Unfortunately, in the last 20 years or so, environmental changes have very much decreased the beauty of the coral reefs. Hurricanes have demolished some of the shallow reefs where a snorkeler could once see the coral just a few feet below the surface. Construction projects on some islands have caused muddy run-off water during heavy rains, and the mud smothers the coral near the shore. Warming sea waters have resulted in coral bleaching, a sad destruction that's shared by many other places on earth. I am happy with memories and underwater photos, while sad for the recent deterioration and especially sad for the many threatened species of underwater life.

Oh Mae! Thank you so much for sharing these Caribbean cookbooks with us for Cookbook Wednesday!

I can see already this is going to be a dangerous day for me. I'll be adding cookbooks to my wish list like crazy, lol...

You sure have managed to accumulate quite a variety in your travels, Mae. Thank you so much for sharing...

I hope you will be adding this link to the linky I posted just now!

These are interesting Carribbean cookbooks, Mae. But most interesting to me is your comparison of the region now versus 20 years ago.

Someday I would love to visit the Caribbean Islands, Though it sounds like 20 years ago would of been a better time. Thanks for sharing your cookbooks, very interesting!

Hi Mae, I think your cookbook series is a great idea - I enjoyed reading about these Carribean cookbooks. My fave Australian cookbook is The Margaret Fulton Cookbook (Margaret is a legend), but a favourite from my grandmother's era was The Schauer Australian Cookery Book. Lots of Aussies also swear by Stephanie Alexander's The Cook's Companion because you can look up any ingredient and get recipes to use it in.

I love these vintage pamphlet type cookbooks. Have you read An Embarrassment of Mangoes by Ann Vanderhoof? It is full of lots of Caribbean memories and some recipes along the way.

Very nice write up on St. Lucia. I am St. Lucian and my husband and I manage a food and recipe website offering free st. Lucian recipes. We love our culture and our cuisine and love sharing. You can have a peek at our work on otmslu.com