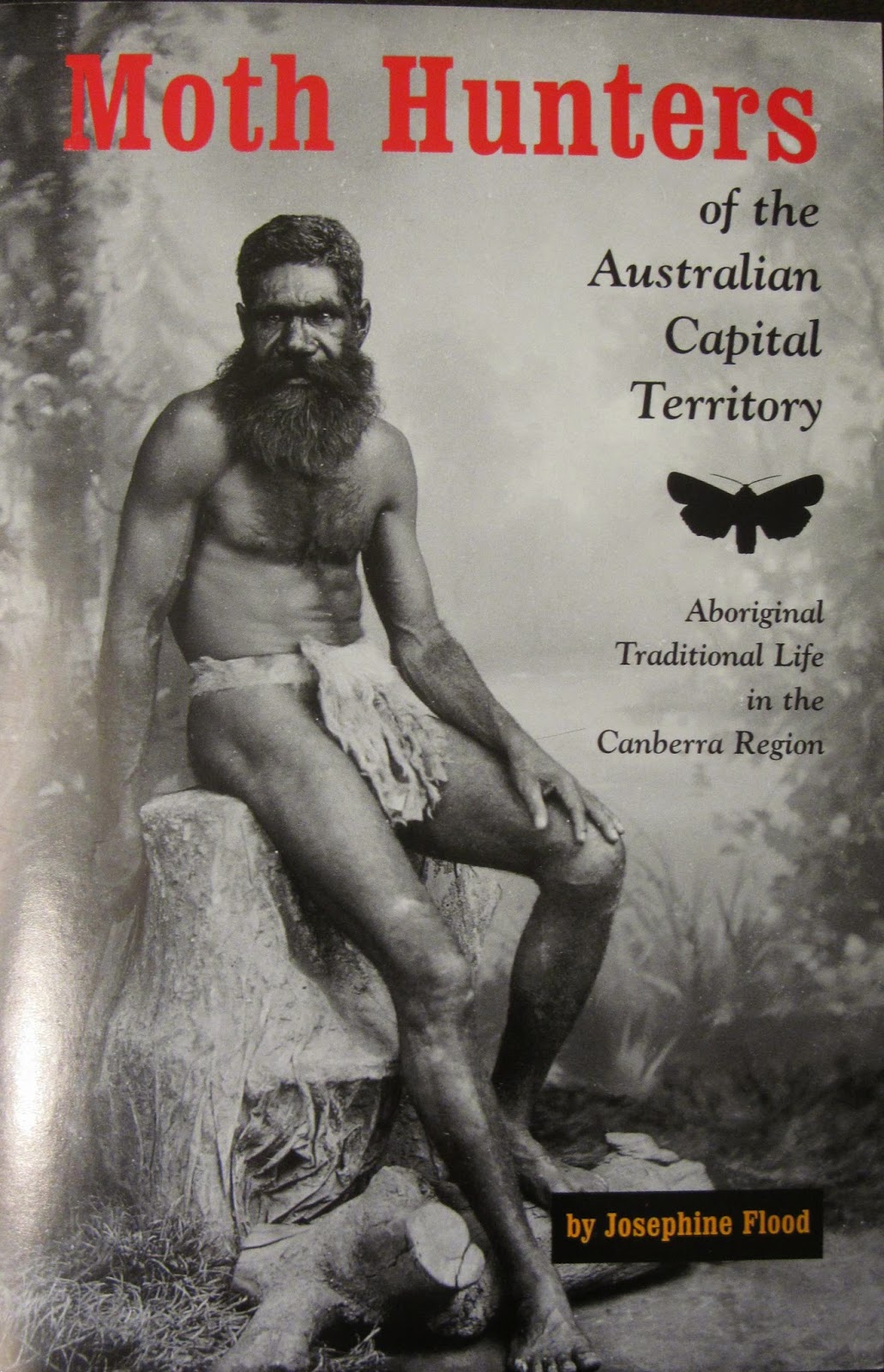 "Moth Hunters of the Australian Capital Territory: Aboriginal Traditional Life in the Canberra Region" is a brief booklet written by Josephine Flood. It includes several photos of the last tribesmen of the territory, who unfortunately died out approximately 100 years ago.*

In an ACT archaeology site called the Birrigai rockshelter, anthropologists like Flood have found stone tools and remnants of their campfires dating to the earliest times. More recent evidence documents their continued presence until the arrival of the Europeans, who arrived in the 19th century. Introduction of European farming practices, grazing animals, cities, and diseases quickly and brutally disrupted native plants and animals and ended the aboriginal way of life.

In their early days thousands of years ago, the aboriginal tribes adapted to the mountain landscapes of the area, exploiting a wide variety of potential foods from trees, grasses, birds, reptiles, marsupials, and insect life. A few European eyewitnesses and native oral histories described one of the most interesting of their foodways: the hunt for swarms of Bogong moths.

During migration, these moths fly from their breeding areas in the plains up to the mountains. They spend the summer in a semi-dormant state on the walls of caves or rock shelters, an activity called estivation (in the Australian spelling, aestivation).

The moths leave their breeding grounds in late September or October, that is, in the Australian spring. During the summer, these areas are hot and dry, and appropriate food becomes scarce. Moths thus go up into the mountains where they search for "the coolest, driest, darkest crevices on the western, windward side of the granite tors, .... In late summer, about March, those which have survived predators and parasites commence the return flight to the breeding grounds" (p. 12-13).

Members of the aboriginal tribes who lived in the area watched for the annual moth aggregations, especially hoping for high density of moths. Abundance varied considerably, according to Flood. Moths were nutritious and easy to collect -- especially compared to the effort that these stone-age people had to exert to kill large prey like an emu or a kangaroo.

When observers who lived close to the mountains saw that the moths were arriving, the local tribe sent runners with message sticks to far-flung tribes, who came from as much as 300 kilometers away. As they gathered, an advance party climbed up to the summit to check for the settled swarms. At the right time, they signaled to those waiting below with bull-roarers: instruments which they whirled around their heads on a string to make a "weird high-pitched whining noise." The gathering of tribes could include 500 people, who enjoyed eating their fill of roast moths, and who also engaged in "initiation ceremonies, arrangement of marriages, coroborees and exchange of goods" (p. 14).

Observers in the 19th century mentioned that during moth-eating season, the usually thin and undernourished aboriginal people became plumper and healthier looking. The moths were rich in fat and protein, and evidently tasted deliciously like chestnuts or maybe almonds. Since moths covered the rock walls in enormous numbers, gathering them was as simple as scraping them off the walls with a stick into a collecting dish or net. A heated stone on which a blazing fire had been set would be ready for roasting them -- "about a minute on each side" (p. 13).

Some sources mention that the hunt was limited to men; evidently the women waited in the valley for their return. Roasted moths could be ground up with round grinding stones, making a paste into "moth cakes" to bring back from the hunt. These round stones have been identified with campfires dating back as much as 1000 years, so the hunts were customary for a very long time. "Ceremonial stone arrangements on mountain tops adjacent to moth aestivation sites in the ACT bear vivid testimony to the links between ritual life and moth hunting." The last recorded moth hunt was in 1865 (p. 17).

*Joanna at the blog Green Gourmet Giraffe wrote this comment: "As for the claim that the Aboriginal people died out 100 years ago, I am not sure because there is an Aboriginal community in the NT. When I was a child I saw a film about the last of the Tasmanian Aboriginal people and was quite surprised years later to be working with a number of people with Tasmanian Aboriginal heritage. So I wondered when this booklet was written as I know attitudes have changed over time." Answer: the booklet dates to the 1980s, and claims that the 500 people of the moth-hunting tribes died out.
Posted by Mae Travels at 3:42 PM

Labels: Australian Food, Posted in 2014, What did historic figures eat

Kudos to you for "getting through" this booklet Mae. I'm not sure I would find it as interesting as you obviously did:) But, thanks for sharing, lol...

P.S. A new visitor has joined the Cookbook Wednesday link. She also happens to be having a giveaway for a Mexican cookbook.

What an interesting story - I have never heard of Aboriginal people eating moths but they are very well known for eating witchety grubs and I guess moths are like grubs with wings.

Re your questions about Australian cookbooks (in case you don't see the answer on my blog), I recommend Stephanie Alexander's Cook's Companion which is really comprehensive and also the Australian Women's Weekly cookbooks. There are so many Aussie cookbooks today it is hard to narrow it down to one but I think these are very popular and focus on the food we actually eat in Australia.