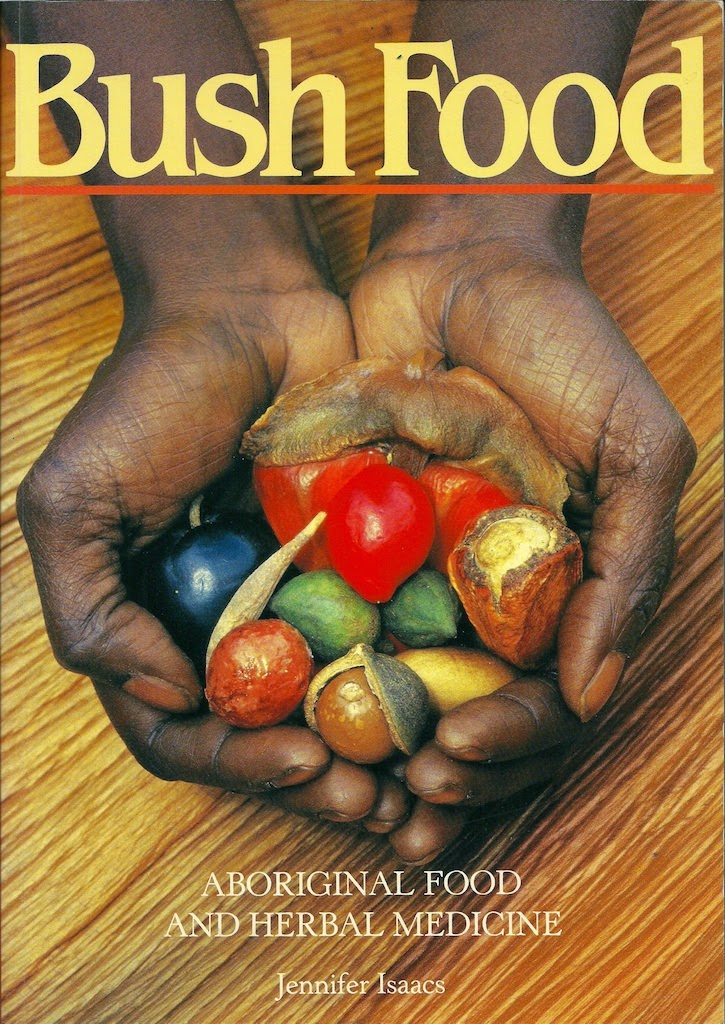 Suppose that you wanted to cook a kangaroo. Or a goanna (Australian lizard). What if you had some unfamiliar small native Australian fruits, what could you do with them? Bush Food: Aboriginal Food and Herbal Medicine by Jennifer Isaacs presents detailed information on Australian native foods and how the Aboriginal tribes cultivated, hunted, or gathered them, processed them, and cooked them.

This book, which I bought at the bookshop of the Australian National Botanic Gardens, is not exactly a cookbook, but it could serve that purpose if you wanted to live on native foods the way Aborignal people once lived. The author explains:


"There are different techniques for preparing and cooking each food. The most common methods are roasting on the coals, cooking in the ashes, steaming in a ground oven and boiling. Some foods, such as turtles, stingrays and sharks, are cooked by a process unique to themselves." (p. 51)

Specialized knowledge enabled the natives to produce safe and tasty food. For example, cooks had to know which species of wood made good fires for cooking, and which produced bad tastes or even toxic smoke. Many plant foods required soaking or other preparation to remove toxins as well, and traditional knowledge of processing enabled the use of many otherwise poisonous items. Bush Food describes many of these procedures.

An important technique for native cooking involved using a ground oven -- a pit lined with hot rocks. Vegetables, fish, or meats wrapped in paper bark or leaves were covered with hot sand and steamed or roasted in the covered pit. Each tribe had its own special methods for building these ovens, and knowledge about how long to cook each type of food. Ground ovens are sometimes still used, according to the author, though aluminum foil often replaces the traditional wrappers. Also, hardware-store covered billies (pots) made from modern materials now offer a much more efficient way to steam foods over a campfire.

"Aboriginal people have an encyclopaedic knowledge of Australian plants and animals and of seasonal changes in the Australian environment," the author points out. These traditions are little known among European and Asian immigrants who have largely displaced the original inhabitants from their long-time lands and replaced native species with often-harmful imports. "Most Australians have never even tasted bush foods." (p. 13 & 11) 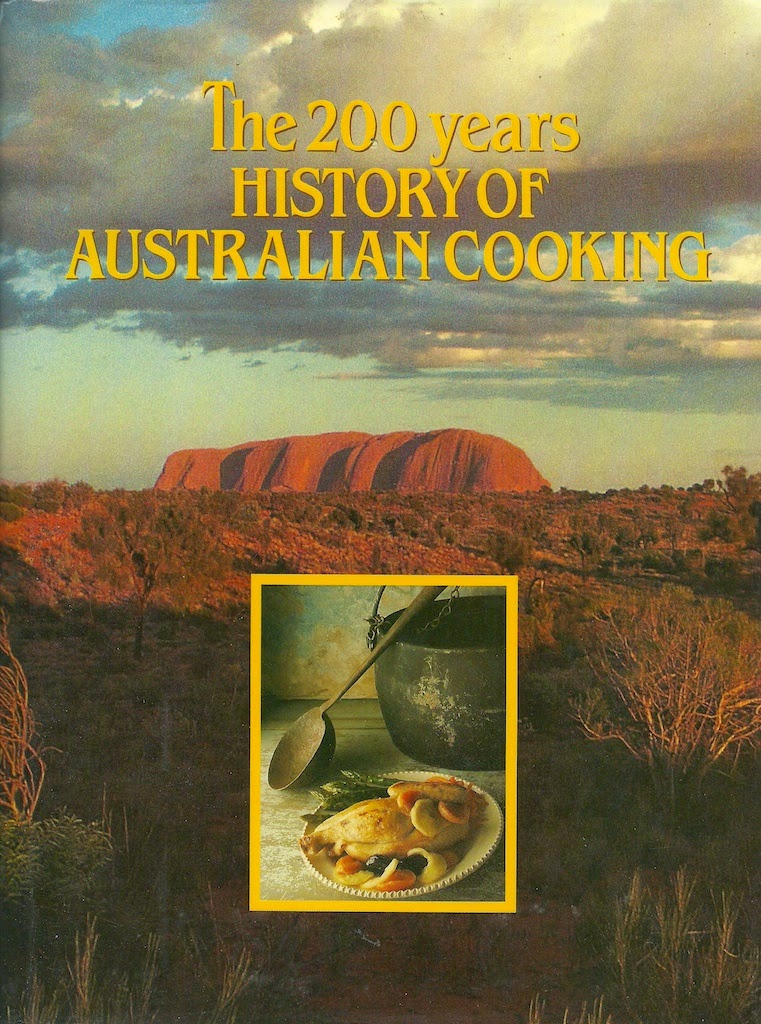 The 200 years: History of Australian Cooking, a more conventional cookbook in my collection, embodies the view that Australian food consists of borrowed dishes from all the immigrant cultures that arrived there from 1788 until 1988 when the book was published. It's definitely an example of ignoring native knowledge and native foods. As I understand it, this view has been changing in the years since the book's publication, and more nuanced views have emerged.

Searching for a better overview of really Australian foods, I found that CNN once published a list of 40 Australian foods. These mostly don't appear in The 200 years. Some examples: Australia's native Macadamia nuts, now grown in many other places; emu and kangaroo meat; a number of fish and seafood dishes made from the local catch; the Pavlova, a meringue and cream cake (disputed for origin between New Zealand and Australia); and several other favorite commercial and home-made pastries.

Number 1 on CNN's list of typical Australian dishes is a hamburger served with a large slice of beetroot. "Vegemite on Toast" is number 10 -- "As Australian as it gets." And item number 40 is Witchetty grubs, labeled the "most authentic of bush tucker." The article explains: "The grub is a nutty-flavored bite that has been enjoyed by indigenous Australians for thousands of years. The wider Australian nation has often struggled with eating it raw, but two facts remain -- it actually tastes good and it belongs to the land."

The three Australian cookbooks that I own are quite limited in their reflection of Australian cooking, as I acquired them years ago without making systematic choices. Therefore I asked two Australian food bloggers, Johanna of Green Gourmet Giraffe and Gaye at Laws of the Kitchen, for their recommendations.

They both suggested one Australian classic of culinary advice: The Cook's Companion: The complete book of ingredients and recipes for the Australian kitchen by Stephanie Alexander. It's available, though quite expensive, from online booksellers in the US and Australia. Johanna also recommended a series of cookbooks from the Australian Women's Weekly. There are dozens of them, on many topics, published over at least the last 20 years.

"My fave Australian cookbook is The Margaret Fulton Cookbook (Margaret is a legend)," wrote Gaye. Amazon's description of this cookbook: "Margaret Fulton is credited as the woman who taught Australians how to cook with the first edition of her revered volume, published in 1968." Fulton's book has been updated recently, and is available in paperback, hardcover, or Kindle edition.

Gaye also wrote: "A favourite from my grandmother's era was The Schauer Australian Cookery Book." Editions of this book are now rare. "Miss Schauer's excellent book first appeared in 1909 under the title of 'Theory of Cookery', and went into 12 editions, with a facsimile edition published in 1991," says another book dealer, adding the following:


"Amy Schauer taught cookery at the Brisbane Technical College, gave classes in invalid cookery at the Mater Hospital, and, during the 1914-18 war gave courses in basic field, camp and invalid cookery. ... Practical, public-spirited, involved in many charitable activities, she ended her days at Strathfield, Sydney, dying in in 1956."

My selection of Australian cookbooks today celebrates Cookbook Wednesday, invented by Louise at Months of Edible Celebrations, and joined now by several other food bloggers. 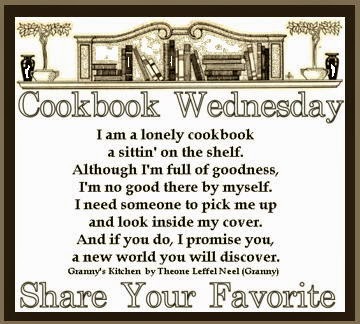 Oh What a delightful post, Mae! I just love it. I am in awe of the books you have chosen to share especially the ones from your collection. Isn't it funny how our tastes in books and foods change through the years but somehow still reflect our desire for more:)

I am really happy to see you have gotten recommendations from Johanna and Gaye, what a GREAT idea!!! They really had some excellent choices. I have to check my shelves for an Austrailain cookbook. I'm not sure if I have even one!!!

Thank you so much for sharing, Mae...

I'm so sorry about this Inlinkz mix-up. It's a long story but, I'm working on it:)

P.S. I'll be pinning this to my Cookbook Board:)

And now I know how to cook a kangaroo, should I need to. This is an amazing collection of cookbooks, a nice look into a culture which is the same, yet so different than ours!

Hi Mae,
These books are extremely interesting. Love cookbooks and your collection is wonderful. Thanks for sharing...Have a good weekend...
Dottie :)

What an interesting post. The whole rise of bush foods in Australia is very interesting - I now use wattleseed instead of coffee in baking and lemon myrtle is always growing in popularity. However I think the way European (particularly British) imported foods showed that although we were aware of overseas trends we were too far away to have the exact items and our foods were often slightly different (such as tim tams in Australia and penguins in UK) - eg damper and sponge cake.

I agree with Gaye about her choice of Margaret Fulton - my mum had a Margaret Fulton cookbook when I was growing up - and I am glad your Women's Weekly cookbooks montage includes one of my faves - Cakes and slices!