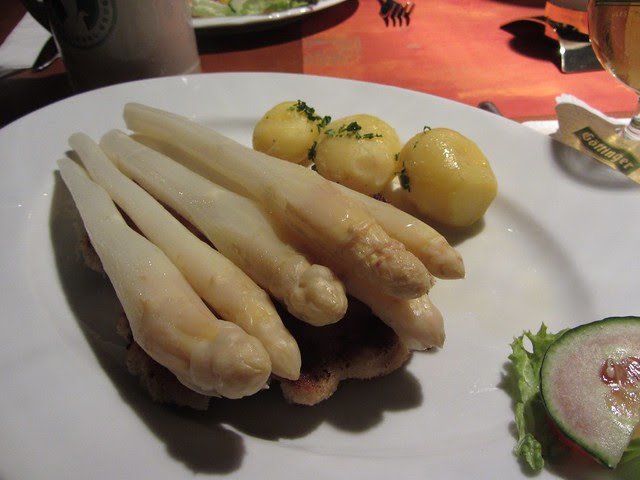 We arrived in Gottingen, Germany, early this afternoon after a night on a plane from Detroit to Frankfort and a morning on a train. It's the end of asparagus season, which is taken very seriously in Germany, as I had always heard. This white asparagus special dinner included the fresh asparagus, Hollandaise sauce, boiled potatoes, and a breaded pork cutlet. And local draft beer. Lovely! I enjoyed my asparagus, while Len tried a particular type of herring, also in season, which also was on the special menu.

The town is really lovely, and was especially appealing as we walked around before and after dinner in the long rays of midsummer sunlight. Small placards on many buildings commemorate the numerous famous people who have worked and studied here. I recognized the names of at least two Romantic poets, Tieck and Brentano, who lived or visited here for at least a little while. The physicists recognized scientists and mathematicians -- we walked by a statue of Gauss talking to his younger colleague Wilhelm Weber and another statue of the chemist Friedrich Wöhler who described the molecular structure of urea in 1828. The chemical formula is inscribed in the cobblestones at the foot of the statue.