"The Devil in the White City" 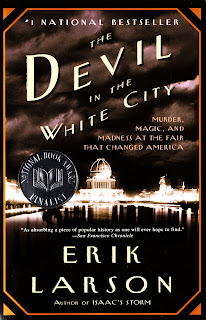 In less than a year's time, an undeveloped park on Chicago's lake shore became a nearly magical "White City" -- the national exposition dedicated for the 400 year anniversary of Columbus's voyage in October 1892, and held in the summer of 1893. Author Erik Larson described a first impression of fair goers:

"They .... walked into the Court of Honor. The gold form of the Statue of the Republic, Big Mary, stood like a torch aflame. The basin in which the statue's plinth was set glittered with ripples of diamond. At the far end stood thirteen tall white columns, the Peristyle, with slashes of the blue lake visible between them. The light suffusing the Court was so plentiful and intense, it hurt their eyes. Many of the people around them donned spectacles with blue lenses." (p. 266)

When I read about the blue specs I realized that this White City was an inspiration for the Emerald City of Oz -- indeed, both L.Frank Baum and his illustrator, W.W. Denslow visited the expo.

Larson mentions many famous and influential visitors, but concentrates on the struggles of the builders and on the life of "the devil" -- a psychopath who used many aliases, especially H.H.Holmes. While living in close proximity to the site of the expo, Holmes probably killed as many as 200 people, mainly young women. (He was hanged after only one conviction.) The people through whose eyes we see the expo in the paragraph above are two sisters, soon to be victims.

In The Devil in the White City, the interleaved presentations of the expo's creators and the pathological destroyer of lives is an outstanding technique for illustrating many aspects of American society. While engineers from Chicago and the east coast were inventing and developing remarkable construction techniques and building such wonders as the world's first Ferris Wheel (named for its inventor), Holmes nearby was building a diabolical building that included sound-proof rooms with gas jets for suffocating victims and a labyrinth in the basement where he could dispose of the bodies. Incredible material!

My favorite topic, food, received some interesting coverage in this book. Meals at the fair were thought to be far too expensive for ordinary people -- the fair took place during an economic downturn when banks, railroads, and building firms were failing locally and throughout the US. People thus brought picnics, which meant that trash was a big problem -- one thing about the "White City" was an effort to make it cleaner than the normal American city of the time, especially cleaner than its host, Chicago. In contrast, the author includes the menus of lavish banquets -- ten or twelve courses mainly described in French, and accompanied by French wine, champagne, cigarettes, cigars, cognac, and cordials. So we also see how the wealthy expected to dine.

A chocolate Venus de Milo and a 22,000 pound cheese from Wisconsin were among the expo's food attractions. Shredded wheat was a brand-new product first seen there. Another novelty that food inventors demonstrated: Aunt Jemima's packaged pancake mix. Cracker Jacks carmel corn snack, Juicy Fruit chewing gum, and Pabst Beer also appealed to their first customers at the expo. In fact Pabst's signature blue ribbon was awarded in a competition there. The introduction of new food products has been a staple event at fairs ever since. (I'm thinking of the mini-donut invented for the Minnesota State Fair some time in the 1980s. Or corn dogs.)

In the first all-electric kitchen ever built, expo-goers saw the first automatic dishwasher. Electricity was used in many relatively novel ways at the fair, supplied by the first large-scale Alternating Current from a Westinghouse generating plant, instead of Edison's preferred DC. Electricity powered the Ferris Wheel, elevators to the walkways of the tall expo buildings, moving picture projection by Edison's new Kinetoscope, demonstrations of long-distance phone service, and lighting to illuminate the fair at night.

If the book had only described the marvels of the fair, it would have been vaguely interesting. Details of the lives of the architects, politicians and engineers, however, are skillfully played off against the macabre life of H.H.Holmes, the deaths of his victims, and the story of how he was eventually caught at his evil doing. Thus for me, the book becomes a real winner. I'm really grateful to my friend Prue who loved it and told me about it.
Posted by Mae Travels at 11:37 AM

I've had several friends who've read this, but somehow the subject matter escaped me. This sounds like something I'd love.

I hope you get around to reading it -- it really is well written and thought out.

I'm catching up on your blog. This is a book that my book-club-of-two (me and my friend in Canada) are considering. It sounds fascinating -- good to hear another review -- it moves it higher to the list!

I have always been quite fascinated by the innovations inspired by long ago fairs, expos and centennials. I'm intrigued by your introduction from another vantage point. Thanks Mae!!!

Thanks, Jen, Jeanie, and Louise for the comments on this and various posts. I really enjoyed this book and hope you all get around to reading it eventually.