"The Boy in the Striped Pyjamas" 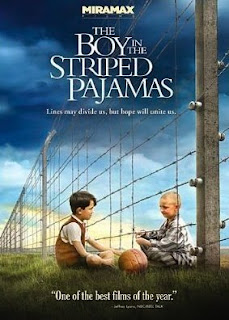 Update: why this is on the food blog. The theme of hunger and contrast between the Nazi family's beautiful, carefully prepared food and the starving concentration camp victims who surround them is a strong theme: perhaps one of the strongest in the film.

We just watched the DVD of "The Boy in the Striped Pyjamas." It's a very hard movie to watch because it deals with the Holocaust in a brutally frank and chilling way. Dramatically it's a little thin: it pushes the watcher's buttons in a predictable way. Each character represents a different stereotype who develops in a 1-D way, and it has a fairy-tale plot that's too much like a fantasy. One can't help making a comparison to "Life is Beautiful" and this film doesn't stand up to the quality and subtlety of that one.

The individual performances were superb, though, including an SS officer acted with skill by David Thewlis -- who played Remus Lupin in the Harry Potter movies. There were also 3 amazing child actors.

My Israeli friend Vitta at fitness class loaned it to me, as she thought I would like it. That is somewhat true. Horrifying though it was, and predictable though it was, I watched intently.

UPDATE: I used the British spelling in my post because that's the primary spelling in IMDB.
Posted by Mae Travels at 12:04 AM