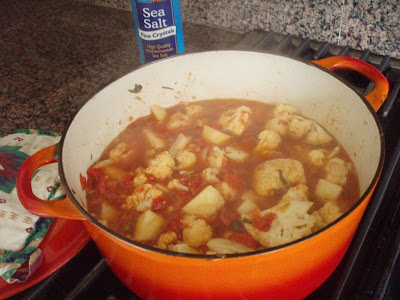 As I was thinking how to cook my cauliflower from the farmers' market tonight, I realized that I had all the ingredients for aloo gobi. My own introduction to the dish (and I think that of many other non-Indians) came from the film "Bend it Like Beckham." The heroine of the film wants to be a soccer player, and is very good, but her parents believe that it's better to make good aloo gobi than to "bend it like Beckham" -- another concept, this from soccer, that I learned from the film.

The line is pretty memorable, but what's very memorable is the DVD extra of the film director, Gurinder Chadha, in the kitchen with her mother and her aunties, who watch and give advice while she's trying to explain to her audience how to make aloo gobi. This extra feature is fabulous, maybe better than the film itself.

I made my aloo gobi in a big orange cast iron pot -- you can see the cauliflower, potatoes, tomatoes, onion and most of the spices stewing above. For serving, I added the recommended chopped coriander leaves. I was missing some of the spices, but not what I considered to be the most essential. I've also eaten aloo gobi in a couple of Indian restaurants since I saw the film, and this version (located by googling "aloo gobi beckham") is a little different; the restaurant ones were drier and less tomato-y.
Posted by Mae Travels at 10:21 PM