Hard Rain by Irma Venter is a thriller, and quite suspenseful! I chose to read it because it reflects a culture that's completely unfamiliar to me. Venter is South African, and her book is translated from Afrikaans. I don't think I ever read a novel from this area or language, so I was very curious. I recently read Trevor Noah's memoir of growing up there, which set my expectations (blogged here). 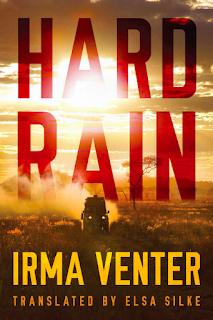 Indeed it was quite exotic. The action is set in Dar Es Salam, Tanzania, and in South Africa. My expectation was that tensions between racial groups would be reflected, but there is not a single mention of race or race relations in the entire novel. Perhaps a reader who understood subtleties that escaped me would be able to identify some of the characters by race.

The plot of the novel is tightly wound, but there are a variety of unconvincing aspects to it, particularly some of the relationship details of the characters, and particularly the incompetence of police in examining evidence in various murders. My understanding of available forensic technology, admittedly, comes from other police procedural novels, but I'm not convinced about how bad the police in Hard Rain were.

Any further discussion of the plot or characters would be a major spoiler for this novel, so I'll just talk about one set of details: the mention of several foods that I had never heard of because they are unique to South Africa.

The first is called malva pudding. It's served after a dinner on a farm in South Africa by the mother of Alex, one of the two alternate narrators of the story:

"My mother shakes her head. Her hands fumble nervously in her yellow-and-white apron. Her eyes dart from me to my father. '... There’s still malva pudding for dessert.' Ranna sits down again. 'I don’t know when last I had malva pudding.'" (p. 242).

OK, what's malva pudding? I had to look it up. In Afrikaans, the word "malva" means marshmallow; the word originated in reference to the mallow plant, which produces a sticky substance that produced marshmallows in earlier times. This word derivation -- as in English -- is mainly forgotten. South African malva pudding is a marshmallowy dessert, made with sugar, eggs, apricot jam, milk, butter, and flour, and often served warm with a sweet custard sauce. It did once feature on a Prue Leith cooking show, but not the Great British Baking Show.

After visiting Alex's family, Ranna goes to a small resort hotel for a short stay, and she enjoys the food in the dining room. She says:

"My hotel has only seven bedrooms. It’s reasonably priced, and the food is fantastic. I eat everything I’ve found only lame replicas of over the past few years. Roosterkoek, bobotie, sweet potato, snoek." (p. 307).

Obviously, I had a bit of looking up to do! I learned that "Roosterkoek (literally grill cake ...) is the traditional bread to accompany a braai or BBQ. The roosterkoek are simply balls of bread dough cooked on a grid over the coals, and are best eaten piping hot and straight off the grill." (source)

I also learned that South African snoek is "a long, thin species of snake mackerel found in the seas of the Southern Hemisphere." It's popular in many different recipes there, and available fresh, smoked, or canned, but evidently the taste is not always pleasing to Europeans. (wikipedia)

Searching the internet, I found a recipe for "Snoek and sweet potato bobotie." Bobotie is a kind of savory pudding including mashed sweet potatoes flavored with butter, ginger, curry, onion, garlic, cumin, and tomatoes. The snoek is cooked, flaked, and then added to the pudding before it's baked. So now I know, but I don't think I'll try this recipe. (source)

I can't say I really recommend Venter's thriller, but it definitely didn't disappoint me in my goal of learning more about an unfamiliar culture!

I read this too and it was okay. I highly recommend Deon Meyer’s police mysteries set in South Africa - they are very good!

Mae, I have never seen canned snoek in South Africa. It is caught fresh off the west coast and resembles a barracuta found in New Zealand waters. We eat it fresh or smoked. As for babotie, this is traditionally a curried mince dish with a savoury custard topping. I lot of people now make it with lentils instead of mince and both versions are delicious. Malva pudding is fantastic and I hope you try making it. Perfect for winter.

I'm pleased when a book includes mentions of culturally specific foods. It adds so much to the atmosphere.

I don't know if I want to read the book but I do want to investigate some recipes from this area.