Tokyo Ueno Station by Yu Miri, translated from the Japanese by Morgan Giles, is currently a finalist for the National Book Awards in the category translated fiction. The announcement of the finalists was the first I have heard of this author, and I'm very glad to have learned about her and to have read this work. 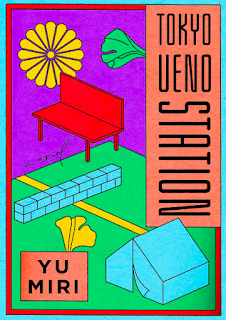 The narrator of Tokyo Ueno Station is a man named Kazu, whose life was filled with tragedy for him and for his family. By the time he narrates the book, he is a kind of a wraith, dead but not dead, affectless and uncomprehending of the trajectory of his life, alienated from all others. He says:

Kazu's main connection to his country and society is the fact that he was born the same year as the Emperor, and that his son was born the same day as the son and heir of the Emperor. However, this isn't enough to give serious meaning to the life he led. Extreme poverty in the village where he was born forced him to leave his wife, who thus raised their children alone: he hardly knew them. He found work as a laborer in Tokyo, far from his family, and lived in hostels and eventually on the street while sending what money he could to them.

Tokyo Ueno Station is a very personal story. It's also a commentary on the way that Japanese society treats its less capable and fortunate members. In a way, it's also an assessment of the human condition. Kind of existential: please pardon me for the cliché! It does all these things with great intensity and impressive skill.

Throughout the narrative, Kazu overhears people talking, and observes brief moments from their lives as he wanders, unnoticed and not really connected to them. Most of this takes place in Ueno Park where he lived for a time in a homeless encampment, and in various railroad stations, Ueno station in particular. He also describes his fellow homeless people who came from all strata of society, for example, the businessmen: "They were like husks, still wearing suits." (p. 84).

Kazu's alienation from people is underscored by a very interesting way the author presents his stream-of-consciousness: Kazu quotes overheard conversations -- very often about food -- as he sort of floats around in the crowded streets and in the park. Here are some abbreviated examples:

“You know that beef-stew place over there? I went a while back, and they weren’t open.” “They close on Tuesdays, you know.” “We should go sometime for their ‘lightweight’ breakfast special.” (p. 132).

“The other day she took me to this eel place.” “Oh, no, no, eels are out, they’re going extinct, you know. You can’t eat them very often. They’re endangered, and the catch of the young ones is getting smaller every year, so if we don’t let some of the grown eels live, the whole species will die out. I’m not joking.” ... “We both got rice with one grilled eel fillet on top. And without even asking, she sticks her chopsticks in my bowl and takes half my eel. She said one fillet just wasn’t enough for her. Meanwhile I’m left with all this rice and nothing to eat it with, so what else can I do? So there I am, eating rice seasoned with Sichuan pepper. In an eel place.” (p. 94).

“When I go to her place, chances are she’ll make burgers.” “Really?” “Anyway, she’s always snacking on something— chocolates or sweets.” “They say you really shouldn’t overdo it with chocolate.”...“She’s crazy about marshmallows.” “I can’t eat marshmallows, they stick to my teeth. Honestly, these days I’m turning into an old man. Just give me some dried sardines, you know, the kind some bartenders put out. I eat them like crazy, like they’re candy.” (p. 95-96).

The reader learns more and more about Kazu's depressing history, and how he and the other homeless people cope with their environment in Ueno Park, which seems so very different from the way a tourist would see it. We once stayed at a guest house very close to the park so I have my own vivid memories and really felt that I gained insight into the story by contrasting my brief impression to the viewpoint of this homeless shadow of a man.

Kazu describes his experiences of homelessness in painful detail, for example, near the end of the book he writes:

"Since I became homeless, my only interest in ginkgoes was the fruit. Wearing plastic gloves, I picked them up one by one and put them in a plastic bag. When it was full, I took them to the water fountain and washed off the part of the skin that stank. Then I would spread them out on a newspaper to dry before taking them to Ameyoko Market, where I could get seven hundred yen a kilo for them.

"My vision was filled with yellow leaves, whirling in the cold winter wind. The turning of the seasons no longer had anything to do with me— but still, I didn’t want to take my eyes away from that yellow, which seemed to me like a messenger of light. The chirp of the signal for the visually impaired was what made me realize that the light had turned green." (pp. 172-173).

I'm finding it difficult to do justice to this unusual novel, but I think it's very much worth reading!

I used to keep track of awards and try to find the winners of previous years in book stores. I kept lists bookmarked on my phone. Ah, those were the days!

This one sounds fascinating and something I'd enjoy. Thank you for the review :)

It sounds very sad...I think I will wait until life is better for everyone before delving into it.

I've been to Ueno Park. It would be interesting to read about someone who is almost invisible. Thanks for the recommendation.

Did you see homeless people when you were there? Sounds like the book sheds light on an issue in their society people might not know about.

What a sad story. Makes one appreciate what we have a lot more. To imagine to lead such a harsh life for your family you never get to see is brutal.

Japan is not the only place where te homeless are invisible. I read his words with great interest and it seemed as if he might be describing a story from downtown LA, Seattle, or even Detroit. It's incredibly sad and I feel this has even a greater meaning if I'd read the entire book. Thanks for the review.