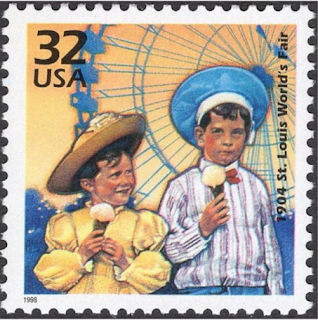 A US postage stamp issued in 1998 commemorated the invention of the ice cream cone at the St.Louis World's Fair in 1904. The stamp is inspired by a photo of a St.Louis family visiting the fair. The photo is the only direct image from the fair showing this novel way to eat ice cream. Several ice cream vendors who had booths at the fair claimed this invention as their own; however, the fair operators' careful records of licensed vendors do not clearly prove who owns this glorious honor. Whatever else is said, the creation of a waffle bent into the shape of a cone and filled with a scoop of ice cream is indeed recognized as having started on the famous fairgrounds in St.Louis in 1904.
I've just read a cute little book titled Beyond the Ice Cream Cone: The Whole Scoop on Food at the 1904 World's Fair, which documents the wide variety of foods served at the famous fair, officially called the Louisiana Purchase Exposition. Author Pamela J. Vaccaro also researched many other claimed inventions of the fair -- "iced tea, the hot dog, the hamburger, Dr Pepper, and peanut butter" as well as the club sandwich, Heinz pickles, and sliced bread. (p.108) Every one of them existed before the fair, several of them having been mentioned much earlier. The history of the ice cream cone, the exception, is very much a history of the fair, as I summarized in my first paragraph.
Vaccaro also explored the other claims of "firsts" at the fair. These, she found, do not represent real inventions or even introductions, but less dramatic popularization or even a total mistake. For example, a particular tea vendor is often said to have introduced iced tea in response to the oppressive St.Louis summer heat. This very same individual had actually sold iced tea at the Chicago World's fair a decade earlier. In addition, Vaccaro found many recipes and references to iced tea during the 19th century.
Beyond the Ice Cream Cone is a fairly amusing book, though sometimes I felt that the author was talking down to me. Maybe that's because she's a long-time elementary and middle-school teacher who feels the need to explain everything in great detail and to repeat herself frequently. Nevertheless, there's a lot of food history here, especially the large amount of information about the control of every detail of food offerings by the committee that ran the fair, about the agricultural and manufacturing exhibits and their numerous free samples, and about the many and varied foods available from restaurants and outdoor vendors. In addition, Vaccaro includes many details, including recipes, about the famous food author Sarah Tyson Rorer (1849-1937), who ran a restaurant and gave cooking demonstrations to her adoring fans throughout the eight months of the fair. 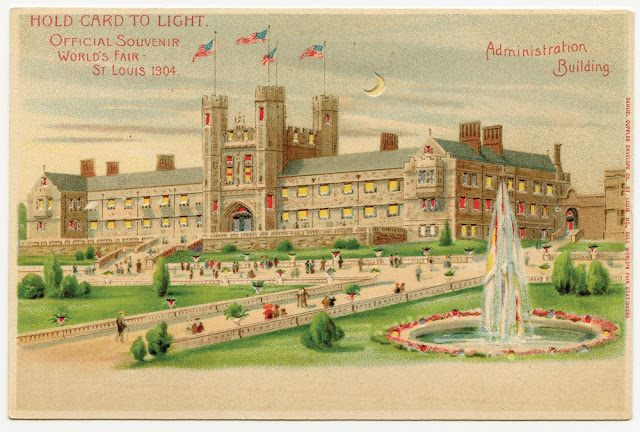 Although I grew up in walking distance of the site of the World's Fair, I can't recall hearing a lot of talk about the fair when I was growing up. Vaccaro's book has me thinking of all the stories that I never heard, though surely some of the older people who were around when I was growing up had memories of something about the fair. I knew that many of the buildings in Forest Park and on the campus of Washington University (where I went to college) had originally been built for the World's Fair -- in particular, the building shown on the souvenir post card above, which I found by a web search. This building was used for the administration of the Fair, and subsequently housed the administration of the University.
While visitors to the fair had a variety of hotel and rooming accommodations available to them, as described in Vaccaro's book, these were expensive, and the fair attracted people who couldn't afford them as well as those who could. Not included in the book is that those who had less money could stay at "Camp Lewis" in the emerging town of University City, an encampment of tents including inexpensive meals and minimal service. This is especially fascinating to me because the site of Camp Lewis became the subdivision where my parents' house was located and where I spent my childhood. Lewis, founder of University City and owner of Camp Lewis, was a very colorful character -- a successful businessman who finally ended up in jail. But that's a story for another day (link).
This blog post © 2020 by mae sander. Photos as credited.
Posted by Mae Travels at 7:00 AM

Love that vintage stamp and it looks almost just like your book cover. Now you have me crave some ice cream :-)

Good morning, I love that vintage stamp and your blogs are always so interesting. I am off to check out the book thanks Happy Thursday Kathy

It sounds like a fascinating story. It's funny that you say, "Maybe that's because she's a long-time elementary and middle-school teacher who feels the need to explain everything in great detail and to repeat herself frequently." It reminds me of a time my mother said of someone, "She must've been a teacher." When I asked her why she thought so she said, "Oh, you can always tell" lol

Whether “invented” at the Fair or not, pretty much everything on that list of claims made me hungry. (Actually I’d pass on the hot dog, cause I don’t do those, even at Fairs! ). I’ll probably just settle for vanilla ice cream sometime in the near future. In a dish. With a spoon. What a boring old lady I am. (I won’t read the book because I don’t even think good middle school teachers talk down to their intended “audience”. So your review which gives me the high points without doing so is doubly appreciated!

I didn't know that was where ice cream cones came from. Whoever had the idea, it was a really good one!

I'm really interested in reading up more about the waffle cone. I always associate gelato with Italy and have never thought about where the cone originated from. Great to now know. Shabbat Shalom Mae.

As fascinated as I was by all your firsts and the ice cream waffle cone (which I knew about), I was even more fascinated by your growing up in St. Louis. I remember when I went there the first time, one of the things I saw (other than a trip up the Arch), was the park where the fair had been. I went to the 1982 World's Fair in Knoxville and learned afterward that many of the locations and pavilions had been removed or demolished. I was so glad that St. Louis had the sense to build real structures that will stand the test of time. Thanks for this fun trip down Memory Lane, dear Mae.

I can remember a story in a 2nd or 3rd grade reader when I was in elementary school about the invention of the ice cream cone at the St Louis World's fair. Now I am going to have to find the book you just read to read more!

I learned several new things today just from your blog....I can imagine how much I would learn if I picked up this book.

Interesting. I always love to learn about food´s origin.
Also interesting you lived right there.

Such an interesting post Mae, I never thought of the ice cream cone actually being invented! Great info and I love the vintage stamp and postcard..

I have always loved that story about ice cream cones. Food history is always so interesting. Thanks for sharing about the book!

The little boy on the vintage stamp looks as though he'd rather not have that hat on :) Great history on the ice cream cone Mae.

How fascinating to find the history of something that seems so everyday. Thanks for an interesting post, and for sharing it with Weekend Cooking!

I hope I remember this fact the next time I have ice cream with someone. I prefer my ice cream in a dish.
I was 15 when the world expo was in Montreal. I wonder if there are any books written about it?
Off to check it out.