The Chauvet Cave in France 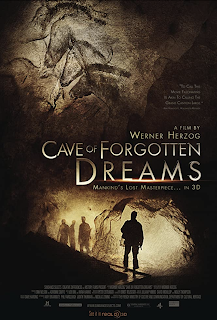 Werner Herzog's documentary "Cave of Forgotten Dreams" offers a rare tour of an unimaginably ancient site: the Chauvet cave in the south of France. Images and bones of extinct cave bears, cave lions, rhinos, mammoths, and more illustrate human encounters with these animals, as well as horses, ibex, and many others whose descendants still survive in our world. The humans who inhabited the region between 25,000 and 35,000 years ago seem to have held ceremonies in the cave, as well as painting the amazing murals on the walls and seemingly constructing an altar with a bear skull placed on it.

To preserve the pristine images throughout the cave, which was discovered in 1994, the French authorities allow very little access, and limit visitors to just a few scientists. As a result, the paintings have suffered little damage of the type that resulted from large numbers of people viewing most of the other known Paleolithic rock-art sites, and the footprints of people and animals, as well as the art works, are still unspoiled. The film shows us all this and more. 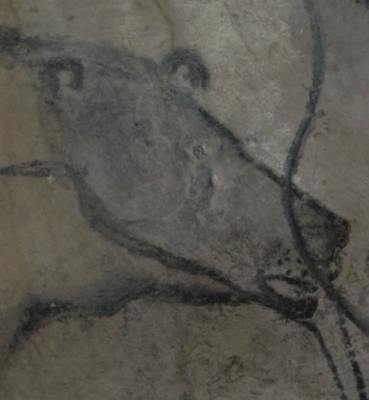 Musical instruments such as flutes, and small carved human figures also characterize the residents of this part of Europe in the Paleolithic era, and the film includes much about them. Besides the human residents and the very numerous types of animals, the area was populated by Neanderthals, who -- interestingly -- seem to have left no artwork or artifacts at all. Scientists and historians of humanity believe that the Neanderthals, in fact, did not develop these amazing skills at rock-art painting, carving, and making flutes and other items. Art seems to be unique to our species.
Blog post © 2020 mae sander.
Photos are screen shots from the film, which was released in 2010.

An amazing discoveries, can you imagine coming up this in a cave while exploring wow! They certainly were talented artists and proves you don’t need fancy art tools, you just need talent!

I saw it in 3D, when it came out. And I liked it very much. I even made a small post related to the movie on September 17, 2011.
I have a passion for cave art, I've seen a lot of them in the Dordogne, and I'm always fascinated by these representations.
Otherwise did you see these other Herzog's documentaries : "into the abyss" and "Grizzly man" which are really very striking ? I wish you a good weekend

It's remarkable they've committed to maintaining it as it was. It must be a goldmine for the scientists.

The cave sounds very interesting. Perhaps some day I will have a chance to travel there. One can dream of a time beyond Covid. Stay safe.

very interesting and with the Photos!
Have a good weekend, Elke

The Cave of Forgotten dreams does sound interesting, I would like to see this myself. My hubby used to love exploring caves, it would neat to come across these images inside a cave. Thank you for linking up and sharing your post. Take care, enjoy your day! Have a happy weekend! PS, thank you for leaving me a comment.

Hi Mae :) Oh that looks like an interesting film, thanks for suggesting it!

I've been trying to get here for three days, and I finally am. You asked about the card that I used in my artwork on the 1st. It is a PURCHASED card and was designed by an artist named Tim Holtz. He also designed the paper dolls I talk about. Not a relative of mine, but Tim calls them "Found Relatives." There are about 15 cards in the pack.

This sounds fascinating. It reminds me a little of the "Ruth Galloway" mysteries by Elly Griffiths about a forensic archaeologist. She's in Norfolk, UK but the topic itself is what is fascinating. How did you see this? Does it stream on Netflix (I hope, because I don't have Prime!) Thanks for the alert.