The Good Samaritan was a Bad Economist 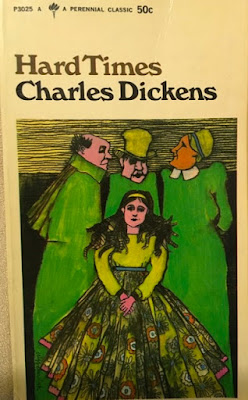 Hard Times by Charles Dickens is a very old classic, published in 1854. Tired of reading books and newspaper stories about the difficulties of our own hard times, I thought I would escape by rereading something familiar and distant. I quickly realized that the central contrast in society depicted in Hard Times is still going on.
This contrast lies in Dickens' depiction of a banker and a politician on one side of things and several innocent characters, such as a pure young middle-class woman, an honest working man, and a virtuous working woman. There are questions of how children should be educated, and how society should treat people at all levels. There are a few evil characters, a few circus performers with honest hardworking dogs, a demagogue stirring up the factory "hands," and other colorful, Dickensian characters. They live in Coketown, a miserable manufacturing city in the grimy north of England.

Dickens as always creates characters and situations that exhibit extreme individuality to the point of caricature, including rather satiric names such as Mr. Gradgrind the merchant-become-politician or Mrs. Sparsit, a busy-body spinster of reduced funds, or Mr. McChoakumchild, a schoolmaster. These characters are highly typical of their social classes, highly susceptible to pretensions of various kinds about their place in society, and subject to the extremes of belief, fanaticism, and lack of empathy to others. They could just as well be types to exemplify our own society — especially the banker! There’s not a chance that I could feel any sense of escape from our current reality by reading this book.

I don’t want to belabor the points of similarity between these characters and the miserable specimens that populate our own news feed these days, but I’ll just quote a conversation between Mr. Bounderby, the banker, and Mr. Harthouse, a visitor who has just arrived in Coketown:

"‘Coketown, sir,’ said Bounderby, obstinately taking a chair, ‘is not the kind of place you have been accustomed to.  Therefore, if you will allow me—or whether you will or not, for I am a plain man—I’ll tell you something about it before we go any further.’

"Mr. Harthouse would be charmed.

"‘Don’t be too sure of that,’ said Bounderby.  ‘I don’t promise it.  First of all, you see our smoke.  That’s meat and drink to us.  It’s the healthiest thing in the world in all respects, and particularly for the lungs.  If you are one of those who want us to consume it, I differ from you.  We are not going to wear the bottoms of our boilers out any faster than we wear ’em out now, for all the humbugging sentiment in Great Britain and Ireland.’

"By way of ‘going in’ to the fullest extent, Mr. Harthouse rejoined, ‘Mr. Bounderby, I assure you I am entirely and completely of your way of thinking.  On conviction.’

As I read this, I felt as if Mr. Bounderby would be perfectly at home in certain circles of our society, who feel that workers are treated very well -- too well -- and that they only want to lead a good life, a life that should be reserved for bankers and for the upper classes. The only thing that's changed is that the banker wouldn't mention turtle soup and venison.

Hard Times has wonderful characters, a dramatic plot, and plenty of action, and it's also a morality tale. A tale for their time but unfortunately, the tensions, injustices, the self-satisfied successful men, the victimized women, and the few honest people are just the same now as they ever were. The bankers will always be with us.

I love Charles Dickens. I haven't read this particular book so I was interested to read your review. I think one of most amazing and best things about his books is that they still ring true today in so many ways. Thanks for this review Mae. I am going to listen to another Dickens novel in the near future and this may be my next one. (Or maybe Bleak House-have you read that?) Hugs-Erika

I've read a lot of Dickens but this one passed me by. Or I passed it by. How interesting to look at then and now. An interesting and timely post, Mae.

Years ago, I remember reading the word "hands" came about in England during the Industrial Revolution because all the owners of the shops thought of these people was their hands they used to create the product. Still the same today, I fear. I agree this could well be written by one of our prominent writers today and little would have changed, except, as you point out, the venison and turtle soup.

Dickens was a great story teller, I've not read this one but it sounds like an interesting read. Does seem like an escape from today's hard times. Now, I'm reading "Last Boat Out of Shanghai: The Epic Story of the Chinese Who Fled Mao's Revolution". Talk about "hard times!" I see another trip to Amazon in my future for your Dickens book, thanks for the good review!

I've not read this book but it certainly appears if the commentary of those times is still apt now.

I haven't read this one. The privileged folks are unchanged, it seems :(