"The Gourmet" by Lu Wenfu

"Books about food, of course. Cookbooks. Now that food is scarce, I lie in bed at night remembering the goodies I had before and then all those exquisitely decorated dishes seem to appear right before my eyes. To tell you the truth, my memory is particularly good where food is concerned. I can remember what I had dozens of years ago from a certain chef in a particular restaurant, how it tasted and what the aftertaste was like. Don't you laugh. The aftertaste is important. Green olives are neither salty nor sweet nor crispy but they have a savory aftertaste. Human beings are highly intelligent in creating so many good foods. They eat creatures that fly in the sky, that live on the land and in the seas and rivers. Otherwise they wouldn't exist today.... 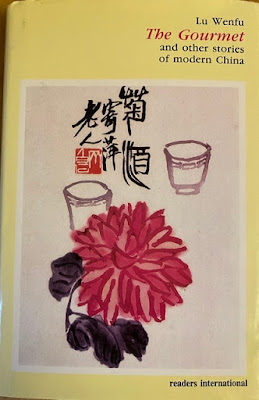 The novella "The Gourmet" by Chinese writer Lu Wenfu (1927-2005) offers a look at the way the Chinese revolution and Communist era affected a few very specific individuals in one city, Suzhou, which is near Shanghai. The story follows several characters, mainly the narrator, a poor boy who tries to commit himself to the communist ideal (with varying success and satisfaction), and Zhu, a landlord and rich man before the revolution, who is the "gourmet" of the title. The novel begins in the 1940s when the narrator is a very poor boy, and Zhu is the landlord of the boy's family, and continues for over 40 years.

Like many skillful and talented authors who write their political views, Lu Wenfu creates vivid and charming characters that take on a life of their own even as he is using them to make his ideological points. At the beginning, while landlord Zhu can easily live on the proceeds of his buildings, he leads a completely indulgent life. He starts each morning in a noodle shop where he wants to get the first batch of noodles that are cooked in the purest water. Throughout the day he eats his way thorough a number of fine restaurants, with breaks for digestion which he enjoys in a bath house. 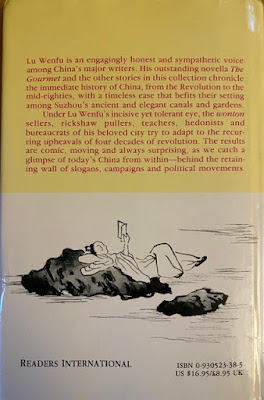 The gourmet, Zhu, in the view of the narrator, is self-indulgent, cruel, and selfish, but the narrator is only a boy and must do whatever Zhu demands and grovel when Zhu gives him a tip. The pain that the boy feels at being an inferior is poignant. He deplores the gluttony and waste in the restaurants, as well as their pretension, despite the high standards of their cuisine: vivid descriptions of some of the foods are included!

As the boy grows older, he participates in the Communist takeover of life in Suzhou, where change is not rapid. However, slowly, the privileged in society loose their advantages, and the politically adroit members of society become powerful and of course sometimes cruel and dictatorial.

Zhu's privilege is lost, though he seems to be a survivor who manages to manage! The narrator is generous to him, despite their past. At the worst point, when food is almost unobtainable, he gives Zhu some pumpkins that he has come by in a slightly questionable way during the famine.

The narrator never really triumphs over the bourgeoise, and he suffers from many mis-steps, but he does become the manager of one of the very high-end restaurants of the town, and tries to make it conform to the evolving ideals of the communist regime. He falters, trying to please everyone without ever really pleasing anyone. Sometimes he's punished along with the former members of the privileged class. At the end, the narrator is forced again to tolerate the egotism of Zhu, whose memory of food makes him useful in an effort to restore some of the luster to the food culture of the city.

My summary of this novella doesn't do justice to the very vivid writing about each step of the way, including a number of minor characters besides the narrator and Zhu. While I have read accounts (both fiction and nonfiction) of this era in China, I found the nuanced tale of individual experiences fascinating.  It offers a microscopic view of the impact of the vast changes that happened in the 1940s though the 1970s, including the great famine and the Cultural Revolution.

As far as I can tell, this 1987 edition is the only English-language edition of the book, which remains relatively obscure. I have only read the title story, and plan to read the others. My review is © 2020 and is written for mae food dot blog spot dot com: if you read this elsewhere, it's been pirated.
Posted by Mae Travels at 8:30 AM

It sounds like a really interesting story, though I think the Zhou character would annoy me. What a shame that the book is obscure - it sounds as if it deserves to be known.

Seems like an interesting read! Thanks for sharing, Mae.

I´ve seen a docu where they had a "channel" with fresh water to cook noodles in. Crazy!
What do we do? Take a pot of water, throw salt in it to cook!
How different lives are from country to country!

n any case, this is an account that makes you want to know a bit more about this author. I'll see if it's translated into French. Thank you very much for sharing your findings.

I have decided to read through the many cook books we have and see if I can learn something about food and cooking. It's a mighty task but someone has to do it!

What an amazing find. Too bad it's so obscure.

I was reading a book (fiction/mystery) last night that dealt with the rich and powerful in NYC. There were various parties and the meals that were prepared or the cocktail parties with their canapes were described so deliciously, I could almost taste them. I thought of you as I was reading these passages.

I love reading books about food, and if there is history as well that's a huge bonus. This sounds really interesting!

This book is exactly what I would read. Thanks for the great review.

My husband and I just returned home from wintering in Florida. One of the things I miss when I'm away for 6 months are all of my books and cookbooks. We've been home for 3 days and this morning, I started going through the bookcases to visit all my treasures. I enjoyed your post; it's always an interesting read.

Some meals stay with you forever! Eating is part of the travel experience to me.

This really does interesting! Yes, it's all about the food in quarantine! I love that we HAVE food!

Zhu sounds awful yet I would like to read the unfolding story. You are very well read and come up with the most interesting books.

New one for me. Cheers

What an interesting book! Like Zhu, I can remember (and practically taste) the specific dishes I had in certain restaurants while traveling as if it were yesterday. Lobster ravioli in NYC, chicken piccata in Little Italy, schnitzel in Vienna, waffles in Amsterdam, shrimp & grits in Astoria, etc. I should have kept a food diary, too!

It is always interesting learning of other cultures. I may have to break down and add this to my ever growing list....

nice, but Gourmet of Another World i love this novel as compared to all others.