Myths and Histories of Southern Food 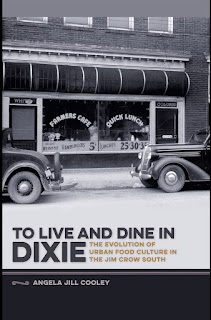 To Live and Dine in Dixie: The Evolution of Urban Food Culture in the Jim Crow South by Angela Jill Cooley is a fascinating exploration of Southern food and culture and how race relations in the South were reflected in the food ways and food myths of the 19th and 20th century. The author explores a number of Southern views of food and the people who cooked, sold and served it. A very detailed history of several chain restaurants, including McDonald's, Burger King, Woolworth's lunch counters, and Cracker Barrel, as well as interviews with proprietors of smaller restaurants supports the discussion of the struggle to give Black customers equal access to public accommodations. I learned quite a bit about the Civil Rights movement and the passage of the Civil Rights bills in 1964 and later.

What is Southern cuisine? Cooley points out that white people and Black people in the South ate pretty much the same foods, but made distinctions that reinforced stereotypes and supported white supremacy:

"The terms 'southern food' and 'country cooking' continue to signify whiteness in the supposedly postracial American South. Designating fare as 'southern' or 'country' serves to artfully contrast it from soul food. The term 'soul food' was coined in the late 1960s and has been a way for black northerners to reconnect to their southern roots and to celebrate black culture. It predominately features staple dishes long served in the South— the same foods, including black-eyed peas, sweet potatoes, pork, and fried chicken, that black and white families prepared and consumed across the region." (p. 149).

In the context of defining Southern cuisine, I especially enjoyed Cooley's discussion of twentieth-century cookbooks, especially community recipe collections. These books contributed to myths about the old South and about the relationships of white people to Blacks both during the slavery era and after the Civil War. This "imagined historical past" included modern drawings of supposedly historic scenes showing white women and their black slaves or hired help. These stereotypes reinforced 20th century race relations as practiced in their communities -- "cooking instinct was often attributed to black cooks as an organic part of their nature. Although white women might lay claim to this talent as well, they did so in ways that did not diminish the notion that a black woman’s natural place was in kitchen service." (p. 82-84)

As did the food of the entire country, Southern food changed in the 20th century. Standard brands, packaged and processed foods, mass food production, and larger food markets replaced home-grown and home-made foods. "Scientific cooking" using standard measurements and detailed recipes became the norm: in the South, this new way of cooking also enabled the invention of a distinction between white housewives and their Black kitchen help."White southerners contrasted this new scientific approach to cooking with the inferior standards they imagined to be at work among the world’s black populations." (p. 33).

As eating in restaurants, diners, lunch counters, and fast-food establishments became the norm, most Southern eating places served only white customers. Both by law and by custom, these establishments refused service to blacks until the mid-20th-century civil rights movement. A shorthand way to refer to these places is to call them "segregated" but in fact there were always black employees cooking and sometimes serving the food; the racial separation was only for customers:


"Although generally defined as 'separation,' few segregated spaces involved a true separation of the races. Instead, the term segregation implies a careful performance of race-specific roles within the space. By the 1960s, white women staffed most downtown lunch counters [in department stores and dime stores], serving as the public face of the establishment as they took orders, served food, and accepted payment. Black women often prepared food in the kitchens in the back. White customers, who included businessmen, working girls, shoppers, students, and laborers, occupied the stools in front of the counter. Black customers, for the most part, stayed outside of the space of the lunch counter as they selected and completed purchases at the store’s registers. Some stores offered a stand-up counter where African Americans could eat, maintaining their distinctly differentiated status."(pp. 108-109).

To Live and Dine in Dixie looks at Southern food from a wide range of legal, moral, social, and political points of view. It shows how a variety of writers, journalists, restaurant owners, women's club members, city fathers, and many others created and maintained an unequal and unjust society. I think the author did a great job with the following questions that she expressed at the beginning of the book:


"How and why did southern eateries become subject to formal and informal codes of segregation, and what efforts did activists pursue to achieve equality in those spaces? Second, what were the legal and cultural manifestations of the expanding regional and national food systems? And how did white southerners react to the changes wrought by increasing standardization in food practices? This book explores these issues of consumer equality and expanding national markets. It tells the story of food culture in the modern and urbanizing South." (p. 6).

Your review of this book is phenomenal. Wichita had one of the first sit-ins in the 1960s at a Dockum/Rexall Drug counter. It made national headlines and got many people's attention.

It's amazing how white women felt so superior to black women who did most of the cooking for the family.

I had no idea about the "scientific cooking" until you pointed it out. This is a fascinating read and I thoroughly enjoyed your review.

Sounds like a thought provoking read and something that could be expanded upon to include this Century.

Sounds like a good and interesting book to read. Take care and stay safe.

This does sound like a good read, Mae. Do you watch the PBS show Somewhere South? WKAR has it Fridays, not sure on your cable or system. (Or at least it did -- it probably is 13 episodes like most of them and I don't know if it turned over!) But you can probably find it online at pbs.org Vivian Howard hosts and she has a restaurant but in this one she goes to various Southern places and learns their cooking techniques.

You are a reading machine this month.....This sounds right up my alley.