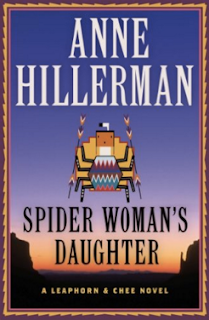 Anne Hillerman, daughter of the late detective fiction writer Tony Hillerman, has written a sequel to his wonderful series of Navajo mysteries. I'm delighted to find that her effort, titled Spider Woman's Daughter,  is highly successful, unlike many sequels to popular detective series. She continues to depict the two main detectives, Jim Chee and Joe Leaphorn, but her focus is more on police woman Bernie Manuelito, now married to Jim Chee. This change in focus allows Anne Hillerman to recreate the series in a new but not radically different way. I think her plot and most of her cultural details live up to the standard set by her father.

Food and travel writing, not fiction, was Anne Hillerman's previous profession. In her new turn as a fiction writer I especially enjoyed the way she used her food-writing skills to depict what the detectives ate. Tony Hillerman mainly had his detectives eat hamburgers at a couple of Southwest fast food chains. Anne Hillerman introduces lots more options. Here are a few examples, which speak for themselves.


"Bernie drove through the twilight into Cuba, a speck of a town known for its restaurant, El Bruno’s, which served some of the best New Mexican food in Sandoval County. They both ordered enchiladas, Bernie’s cheese with green chile and Chee’s with roast beef and Christmas chile — red and green. They had stopped here a few times with the lieutenant after a long day of meetings in Albuquerque. Leaphorn always had a burger, Bernie remembered, with no cheese or onion, and followed up with a piece of pie topped with a scoop of vanilla ice cream." -- Spider Woman's Daughter p. 261.

"It [an interview] also involved eating a Spam sandwich, a treat he’d cut back on since he married Bernie. Mrs. Tsosie added delicious slices of raw onion and tomatoes from her garden, and gave him a box with a big piece of homemade chocolate cake, making him promise to share it with Bernie." -- p. 183.

"'We should go somewhere that has both steak and sopaipillas. Somewhere nice.'
"'Sopaipillas? I love sopaipillas.'
"'I know you do. Miniature fry breads. Puffy. Served with honey or stuffed with ground meat, onions, chile.'" ...
"She ordered the stuffed sopaipilla with ground beef and green chile. He had the steak and chile relleno combination because the menu described the chilies as 'Big Jim.'" -- p. 220-224

If you have been a fan of Tony Hillerman, I think you too will be delighted with this sequel. I've already bought her second sequel, Rock with Wings. 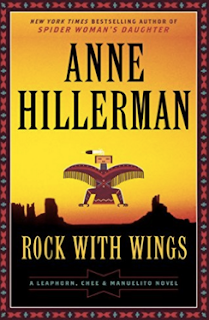 Update: I read it and it's very very good!
Posted by Mae Travels at 3:14 PM

I have been a fan of Tony Hillerman. I am so glad you shared this book with us. I am putting it on my to read list.

I had no idea his daughter was writing. thank you!!! I've only read a few of his books, but I enjoyed them immensely. (Hillerman was born in Oklahoma....) :)

It is great that she is bringing her own touches to the series. Thanks for linking up with FoodiesRead.