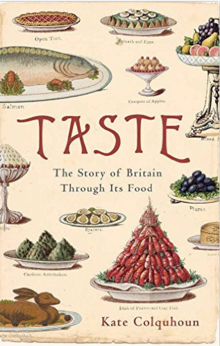 Taste: The Story of Britain Through Its Food by Kate Colquhoun was this month's Culinary Reading Group selection. The group meet each month at Motte and Bailey Bookstore, our sponsor. Gene, the owner, and his wife Jackie are the moderators. This evening's meeting included seven people who attend almost every time, and two others.

Taste is a difficult book, full of excruciating detail. Some of the phrases and sentences people used to describe their reading experiences:
As our discussion proceeded, I began to have the following thought: the less an individual had read of the book, the better he or she thought it was. However, there were many interesting avenues of discussion, quite a few of them about the things we thought the author had missed or skimped on. Examples: we wondered about communal ovens in English towns, about charitable efforts to feed people during hard times, about the vast improvements in English food in the late twentieth century, about the inclusion of cuisines from the Empire and when an imported food (like chicken tikka masala) becomes actually English, about why the author didn't discuss the food served on railroads and steamships in the era of that type of transportation, and other topics.

As always, it was a lively discussion and I enjoyed it enormously.
Posted by Mae Travels at 9:34 PM

I love the reviews of your fellow book club members! It sounds like it has great potential but could have done with a bit of editing or something similar!