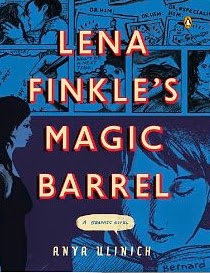 Russian-Jewish immigrants are writing some really fascinating books these days! Here's a new one, published this week: Lena Finkle's Magic Barrel by Anya Ulinich. Since I preordered it, I was able to read it yesterday. I'm not really accustomed to reading graphic novels, so I probably read too fast -- but I completely enjoyed the story of Lena Finkle's efforts to find love in a baffling world, and the visual nature of the presentation.

Almost every book by Russian-Jewish immigrants that I've read has a lot of food themes. Anya von Bremzen's Mastering the Art of Soviet Cooking and Lara Vapnyar's Broccoli and Other Tales of Food and Love focus almost entirely on food in various contexts.

Here's one fun thing about Lena Finkle's Magic Barrel: the author doesn't get all nostalgic about Russian foods. The title character/narrator and her lover  -- a not-Jewish man from a wealthy American family who hates money -- go out for very cheap Chinese dumplings. They eat burritos and pizza, also very cheap. But no Salad Olivier! No cabbage in any form! No Soviet food!

I'm impressed that Ulinich's character  is so assimilated in so many aspects of her life -- but still focused as well on her childhood in Russia. I enjoyed everything about her love stories and about her relationships with her two husbands, her Russian lover from her childhood (who keeps showing up again), her rich American lover, her less successful OKCupid dates, and her all-too-Russian mother and all-too-American daughters. I appreciated her references to classic Russian and other literature, including obviously to Bernard Malamud's Magic Barrel. The foods are a detail, but they reinforce the theme of how thoroughly American her life has become.

I want to follow up with more Russian-immigrant fiction. Gary Shteyngart's Absurdistan and some of his New Yorker stories were great, and I want to read his more recent books.by Boris Fishman also tempts me.
Posted by Mae Travels at 11:07 AM

Hi Mae,
I'm so glad to hear that you are enjoying your latest reads. This latest one sounds like perfect Summer reading.

Thank you so much for sharing...

P.S. I know you were befuddled by the car post. My late husband was a car aficionado but unfortunately, when he passed, we had to let go of his cars. I vowed to one day replace at least one when I could afford it. I may not go through with it but for now it makes me feel like I am sort of keeping my promise to myself. It may change:)